Videobrasil: Its 19th Festival’s edition and a new venue

Videobrasil’s new venue Galpão VB hosts the Southern Panoramas | Commissioned Projects show of the 19th Contemporary Art Festival Secs_Videobrasil. The exhibit is the result of an unprecedented call for project submissions designed to support the production of young artists from the global South.

Since 1983, the Festival has been bridging gaps in the art world and encouraging experimentation. As video art emerged in Brazil, it became the first event devoted to the genre and helped establish it in the country. Later it came to embrace all art languages and shift its focus towards the global South, a geopolitical territory whose art and culture production needs stimulus, promotion, and circulation. The commissioning of projects reaffirms Videobrasil’s vocation to find and leverage the artistic propositions deemed relevant to this symbolic region.

The choice of launching Galpão VB by exhibiting commissioned projects is aligned with Associação Cultural Videobrasil’s goal of pulling together various art languages and building new connections between the current production and its collection. A venue for exhibitions, experimentation, reflection, encounters, and research, it puts the Videobrasil Collection, amassed over the course of 32 years, in touch with the public, making it available to new critical interpretations and confirming its relevance in our days. The collection comprises artworks featured in the Festival and donated by artists; seminal video art pieces; recorded performances; statements; documentaries; and documents, amounting to close to 10,000 items (4,500 of them available for consultation). In the 850sqm warehouse, which includes a gallery, a video room, a reading room, and a garden with an open-air arena, visitors are allowed access to a Video Library dedicated to the visual arts and PLATFORM:VB, as well as services like a café and a bookstore specializing in art. 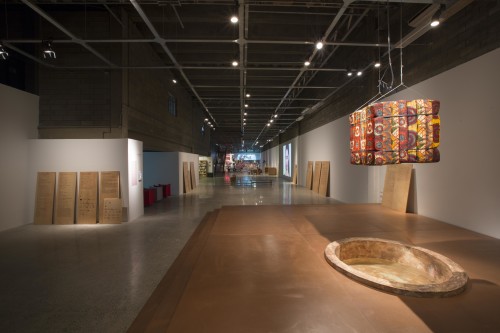 Artworks by Carlos Monroy (Colombia), Cristiano Lenhardt (Brazil), Keli-Safia Maksud (Kenya) and Ting-Ting Cheng (Taiwan) were selected, and their production was overseen by the 19th Festival’s curators: Bernardo José de Souza (Brazil), Bitu Cassundé (Brazil), João Laia (Portugal), Júlia Rebouças (Brazil), and chief curator Solange Farkas, the director of Associação Cultural Videobrasil. According to the curators, the projects “underscore the nuances, gaps and biased perceptions that constitute the plurality of gazes we cast upon the world.” 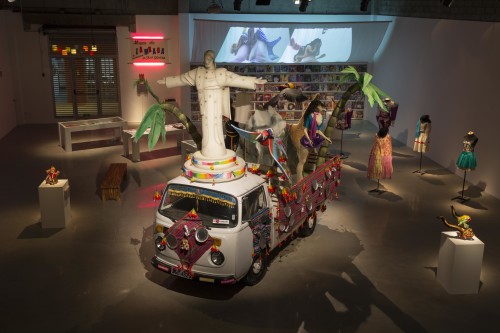 Carlos Monroy’s “Llorando se foi” O Museu da Lambada. In memoriam de Francisco “Chico” Oliveira deals with the controversial 1990s lambada craze. A Brazilian music industry success, the rhythm and its dance became popular worldwide. However, its biggest hit plagiarized a song from Bolivia. The beginning and spread of Bolivian immigration to Brazil, copyright laws, the building of national identities, and Brazil’s detachment from the rest of Latin America are all touched upon in the piece.

Cristiano Lenhardt’s Superquadra-Saci harks back to Brazilian mythology and modernism. The film features fantastic characters enacting an allegory of history. Its title opposes the superquadra, or superblock—an urban unit of Brasília, the ultimate manifestation of national modernist rationalism—and the saci, a folklore character associated with disorder. The artist cuts through several layers of fictional confrontation to build exercises for a politics of freedom and utopian thinking. 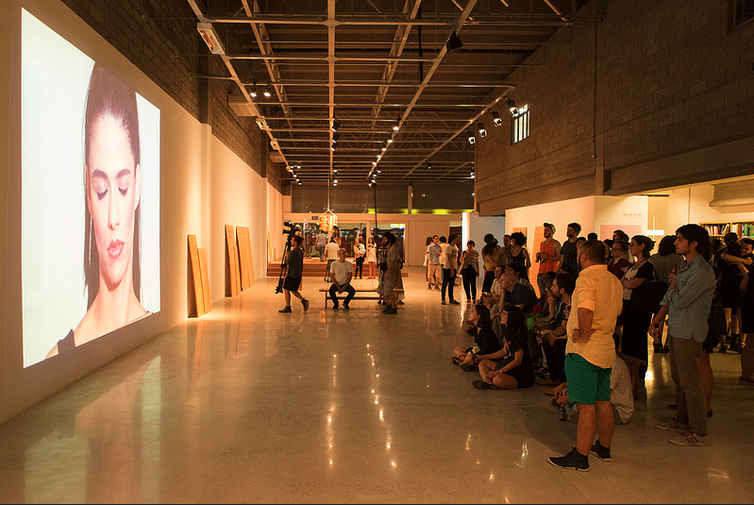 Keli-Safia Maksud’s Mitumba investigates the spread of two European products across the African continent: soap and print fabrics. A bundle of textiles with “African” patterns is whitened with bleach droplets. Made in the Netherlands, the fabrics reference a generic African identity. The installation alludes to the whitening process and to racial cleansing images of the Victorian era.

Ting-Ting Cheng’s The Atlas of Places do not exist is a collection of books about inexistent localities. She compiled roughly 500 publications about places that do not exist at the political, social, philosophical, or geographical levels. The installation interprets the world as a collection of immaterial territories, raising issues regarding Videobrasil’s universe: the global South, its area of interest, is also a conceptual place, symbolically charged and constantly mutating. (from the press release)