Poetics, policies, and technologies of the environment from the ground to the sky, from the soil to the atmosphere

Sophie Dyer and Sasha Engelman, an artist and a geographer engaged with the Open Weather project since 2020, lead an outstanding workshop which, over two days (7 and 8 May) in the spaces of the Fondazione Onassis, taught a diverse group of participants how to build a radio station able to receive images from the NOAA satellite and thus reflect with the help of experience on the power of the imagination when applied to data narration. The workshop was part of Weather Engines, a project and series of activities curated by Daphne Dragona and Jussi Parrikka. This involves an exploration of weather in all its aspects through a wide range of works, some specially commissioned for the exhibition, representing an important support to artistic and scientific research. Videos, installations, films and animations are interwoven with the collateral events and the publication accompanying the exhibition, which does not take the form of a traditional catalogue but, rather, consists of a ‘glossary’ that brings together words relating to meteorological weather through a plurality of voices. And much else. All of this is strongly rooted in the local territory, which extends from the area of the Fondazione to the National Observatory, which was founded as the first research centre in 1842. 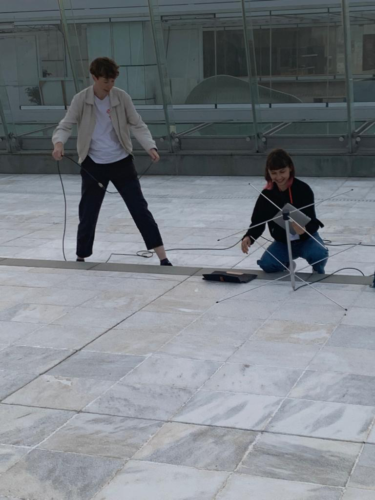 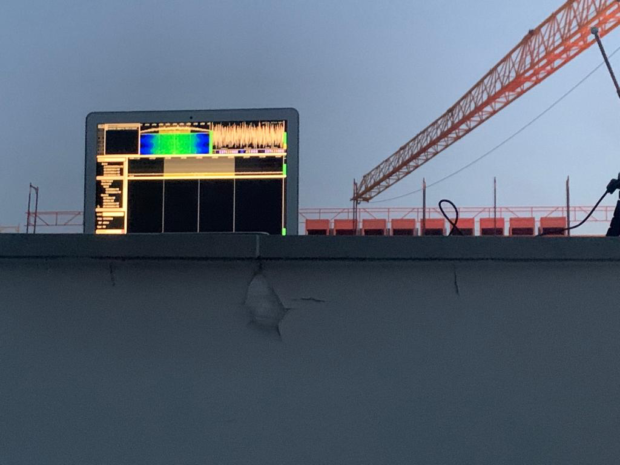 Back to the Open Weather workshop. Through the images captured by the radio stations, but also through the process of getting there, participants were introduced to the invisible dimension of radio waves, a ‘congested’ space where all kinds of information travel on different layers of frequency, some more accessible than others. We are inside the world of data – decoded, imagined, represented and narrated. These narratives are not far removed from reality, but shape it through everyday action which is returned to the atmosphere and then comes back again in the form of data. 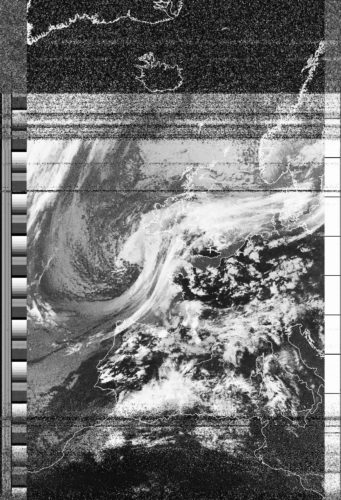 This in itself speaks of how important and influential the way of acting on and constructing these narratives can be. Sophie and Sasha’s approach is firmly grounded in feminist theories: in their choice of collaboration, how space can be occupied and how the project is theorised, all materially consolidated in a synergy between them that easily extends to the participants. In all this the technological body is central and is intertwined with antenna, cables and software. The ‘body’ is also included in the glossary accompanying the exhibition and dedicated to meteorological weather and it was written by the open weather duo. In addition to the “kinetic body with its kinetic and dynamic qualities, their capacities of affect or to be affected”, there is the ‘second body’, “your own existence as a force on the climate, a change in bio-atmos and geo-spheres, and any number of other processes that are a part of these chances”.

Feminist theories and the body are also central to the narrative constructed by the works in the exhibition: the frozen bodies of Susan Schuppli’s multi-channel video documentation of submerged immigrant cases left out in the cold (Cold Cases, 2022); the stylised bodies in Lito Kattou’s slender steel sculptures integrated with technological and natural elements, ‘brought to life’ as real environmental beings (Bodies X-XV, 2022); and the feminine forces representing the powerful Hine-pu-wi-o-toka wind in Shearer & Livermore’s Maori culture (The Huri Wai, 2021), are just a few examples. 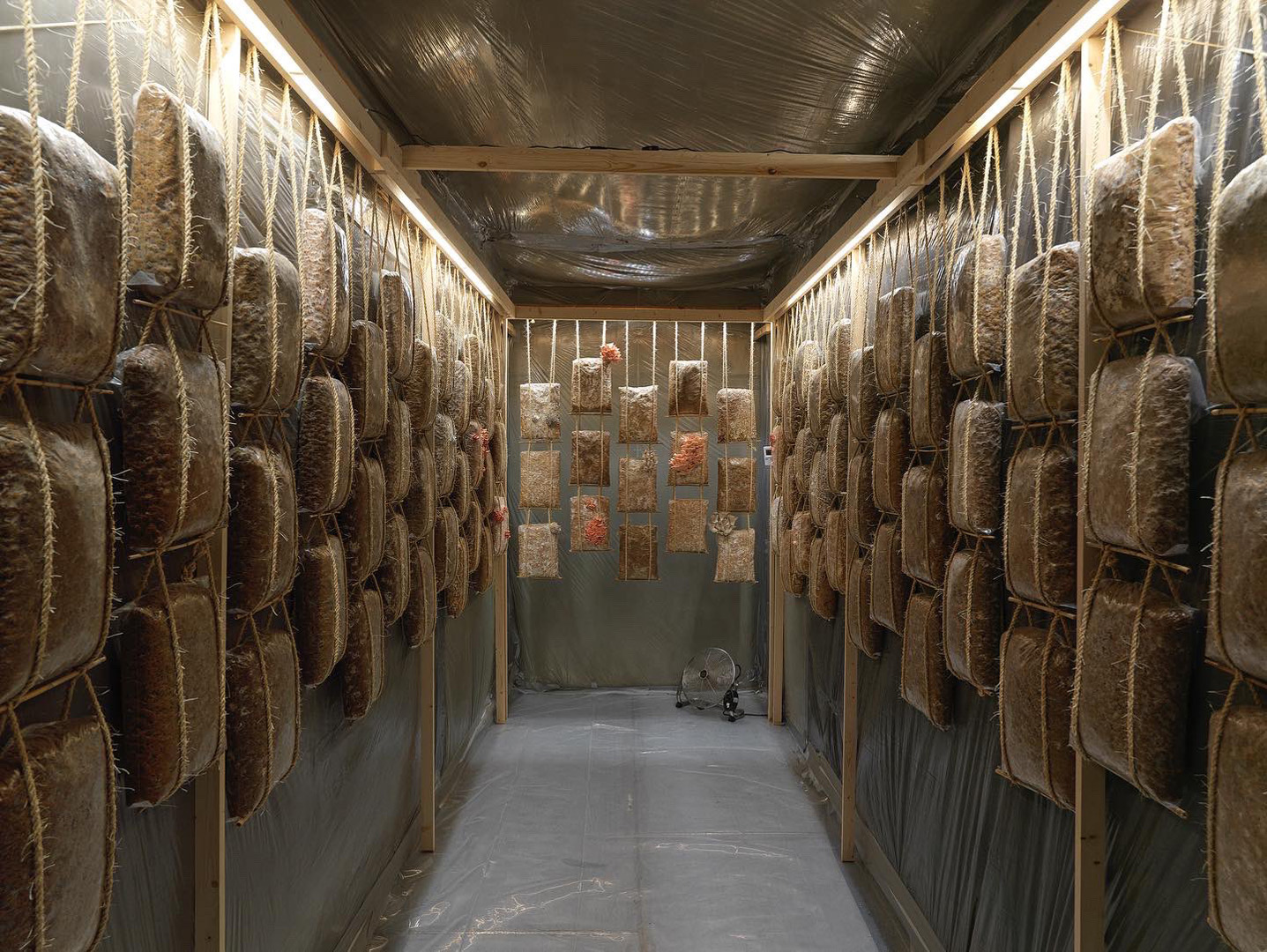 The body, our body, is called into play as soon as we enter the room that houses Mathias Fritsch’s Mycelium Garden, a ‘living’ installation in which a series of mushrooms planted in small islands of compost enclosed in plastic bags generates micro-climates and builds an ecosystem expressing itself through a diversity of forms to welcome and acclimatise, learn and be surprised every day by even the unexpected changes in a true ecological theatre. Mushroom life and man find themselves in a new exchange dynamic, in the impact of their coexistence on climate which reaches its climax when visitors are invited to consume the mushrooms during a moment of conviviality.

No aspect related to climate is left out in this narrative, which respects the intention to explore “the poetics, policies, and technologies of the environment from the ground to the sky, from the soil to the atmosphere.”

Thus the underwater world is narrated through micro-plastic pollution in Hunter & Wright’s short film (Hydromancy, 2021) and also in Hypercomf’s work, where sea pollution enters into a game of associations that, starting from sea caves arrives at the question of human habitation (Marine Caves and Benthic Terrace, 2021). The air is traversed by the geo-engineering interventions on climate narrated by the DESIGN EARTH animation (The Planet after Geoengineering, 2021). Pollen collected from regions experiencing desertification are assembled by Benera&Estefan in the form of geological specimens to preserve the genetic memory of disappearing plants, while the invisible CO2 distribution resulting from the global economy, from the 1970s to the present, is embodied in Manifest Data Lab’s 3D sculpture (Carbon Topologies, 2022).

Soil is addressed by Gil-Fournier & Parrikka’s two-channel video (Seed, Image, Ground, 2020) in the link between seeds, aerial operations, photographic images and the transformation of the earth’s surface into data. The scenarios of ‘more-than-human life’ in the animation by Superflux (Refuge for Resurgence, Window View, 2021) pop up from the bottom of the wall like a landscape seen through a window, almost an omen of the landscape to come.

We cross the city and reach the Observatory. Never out of sight of the Acropolis which, seen from this other angle, is even more powerful. In the spaces of this important research centre, the works lead into the world of instrumentation. Data visualisation systems with radio stations are back, in this case using Passarra & Briot’s wearable antenna (Listening Space, 2019-22), as are simple-yet-effective instruments such as Kotionis’s Aerograph, consisting of sticks attached to the branches of a plum tree that trace the marks left by the movement of the branches in the wind on a sand disc, linking sky and earth.

The first astronaut to land on the Moon was more surprised by the Earth than the Moon itself. The Earth’s spherical image has accompanied us to this day, extending from the analogue to the digital world of Google Earth. Now our gaze and imagination seem to have turned elsewhere, towards the colonisation of other planets, such as Mars, where Alexandra Daisy Ginsberg’s evocative multi-channel installation in the Observatory, using the Unity game engine, simulates the growth of Earth on this alien planet. Meanwhile, the Earth is reconfiguring itself in new data-driven geographies and preparing for a new phase. Man will not necessarily be part of it.