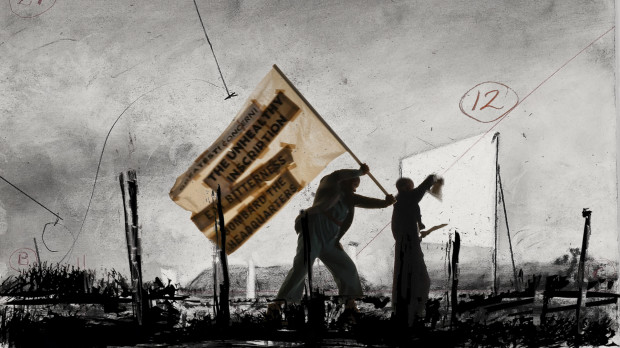 The ZKM Museum, founded in Karlsruhe as a museum in 1989 with the mission to perpetuate classical arts in the digital age, is currently featuring the large-scale panoramic projection More Sweetly Play the Dance by South African artist William Kentridge, a procession of shadowy figures accompanied by the sounds of a brass band. Dancing skeletons are evocative of a medieval danse macabre. Workers waving flags and carrying banners evoke associations with political demonstrations. Musicians and dancing priests are reminiscent of religious processions. The procession of people, almost collapsing under the weight of their baggage and belongings and walking towards an unknown future and all too often towards Death, resembles, not least, the images of refugees that we are currently encountering on a daily basis. The motif of the procession thus becomes a universal symbol for movement, the course of history, political change as well as the moving masses of refugees worldwide. Alongside the superposition of the media drawing, shadow theatre, performance, dance, music, film, and projection Kentridge uses, for the first time in his artistic work, computer animation. (from the press release)