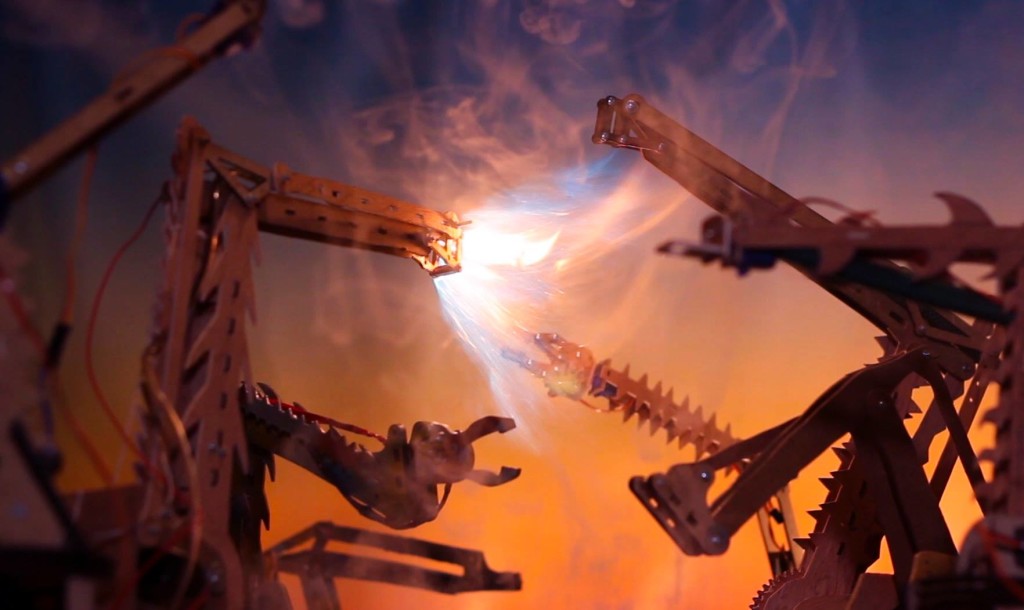 Arebyte gallery is pleased to host South African artist Nelmarie du Preez’s first solo show entitled AUTONOMOUS TIMES (2015), which imagines a future where humans might need to ‘tame’ and domesticate their autonomous yet potentially ‘dangerous’ artificial creations. Inspired by DIY cultures and the changing landscape of labour, she presents a new video work and installation comprised of trust or ‘taming’ exercises performed on a dangerous assembly line between herself and her wild robots.

The exhibition is the result of her residency at the gallery this past summer where she spent time in the ‘lab’ to imagine and construct her new artwork following on her previous work “Loops of Relation” (2013), wherein she established a performance- based collective between herself and her robot.

During the residency du Preez set out to multiply or extend her performance partner into an assembly line of feral robotic arms that need to be tamed. She re-designed, built and programmed her new robots to establish a trusting relationship between (wo)man and machine. Together they began their journey by exploring a scene from Charlie Chaplin’s film “Modern Times” (1936) that features the Billows feeding machine – an automated machine that attempts/fails to feed Chaplin lunch. This attempt and apparent failure of the machine that results in a disorderly explosion was the key inspiration for the video and installation work presented in this exhibition. In times of autonomous cars and self-aware robots, du Preez not only wants to explore our fluctuating trust in technology but also in ourselves and each other.

Delving into the world of online DIY Maker culture, du Preez re-imagined her robotic performance partners. She constructed and altered pre-existing ‘safe’ designs for robotic arms found on open source maker websites like thingiverse.com and Github. For the programming of the robots she spent time on online forums – in conversation with experts and/or ‘hobby-ists’ where she was able to observe the collaborative ‘trusting’ labour of production that occurs online.

Du Preez takes her investigation into the politics of trust and innovation further by drawing aesthetic inspiration from George Miller’s film, “Mad Max: Fury Road” (2015). This film resembles DIY culture with a dangerous twist – set in an imagined apocalyptic future filled with and incredible mix of special effects and real life stunts. She explores this cinematic contradiction (where fake/real mix) and asks why we love to suspend/test our disbelief and how this practice influences the way we imagine and innovate our futures.

The final video work reveals the slippages and boundaries that exist between technology and human interaction or intervention – where power shifts constantly. Ultimately, du Preez uses her somewhat ‘schizophrenic’ relationship with her ‘unruly’ DIY robots to test the suspense between trust/violence; danger/intimacy; fake/real and finally self and other. The exhibition comprises of one video artwork, an installation of responsive robotic arms as well as a live performance at the private view. Furthermore du Preez will present ‘behind the scenes’ material of her assembly line/process. (from the press release)

AUTONOMOUS TIMES, Arebyte Gallery, London, 2nd Oct – 7th Nov / Opening 1st Oct 12 – 6pm / talk on the 3rd of November. This event is organized as part of the South African Season in the UK. The SA-UK Seasons 2014 & 2015 is a partnership between the Department of Arts and Culture, South Africa and the British Council. It is also supported by Arts Council England and Foundation for Future London. The exhibition is part of Art lck weekds and there will be a talk on the 3rd of November

Nelmarie du Preez (b. 1985) is a South African artist based in Pretoria and London working in the fields of performance, photography, video and computational arts. She recently completed her MFA Fine Art at Goldsmiths, University of London, where she also completed her MA in Computational Arts in 2013. She has exhibited internationally in London, New York, Buenos Aires and Berlin as well as major cities in South Africa. In the past year she has been shortlisted for six significant international art awards. She is the winner of the 2015 Sasol New Signatures as well as the 2015 Ampersand Foundation Fellow. Du Preez is currently a lecturer in Visual Arts and New Media at the University of South Africa.