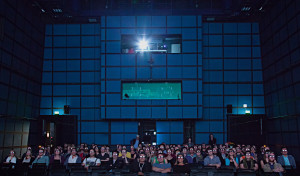 The ZKM – Zentrum für Kunst und Medientechnologie (Karlsruhe), a museum recognized as unique for its exclusive attention towards technology, is now hosting the Beyond Festival (October 2 – 6).  Here is possible to browse the latest technologies, to view films, to experience sound, to interact with visual works, to attend interesting symposia. All is related with 3D technologies and with its great social impact. From technical progress to its creative applications, the Festival crosses disciplines and bridges culture and industry.

“Over the coming decades – states Ludwig Pief in introduction his Festival- new technologies will alter our lives and the way in which we perceive it, beyond the imaginable. BEYOND is the point in space-time in which conspirators of science, technology and art openly plot for the 3rd Industrial and Cultural Revolution, and for environmentally sustainable abundance”.

Every year the Festival strives to go beyond many things, beyond reality, beyond imagination, beyond technological means, beyond itself. With this in mind, on the occasion of the Festival new findings in digital distributions, such as cinema cloud, will be revealed for the first time.  “BEYOND  – states Peter Weibel, ZKM’s Director- means, presenting the cinematographic imagination beyond the threshold of the twentieth century”.

Very interesting is also the symposia programming. Today, on October 5, Jeffrey Shaw, pioneering artist whose work Legible City was part of one of the earliest exhibition at ZKM (Net_Conditions, 1999), presents recent works realized by ALiVE – Applied Laboratory for Interactive Visualization and Embodiment, the laboratory he is currently directing. The works investigate emergent forms as they shape through hemispheric, panoramic, steroscopic and augmented reality. Another two days to travel ‘beyond’ imagination.