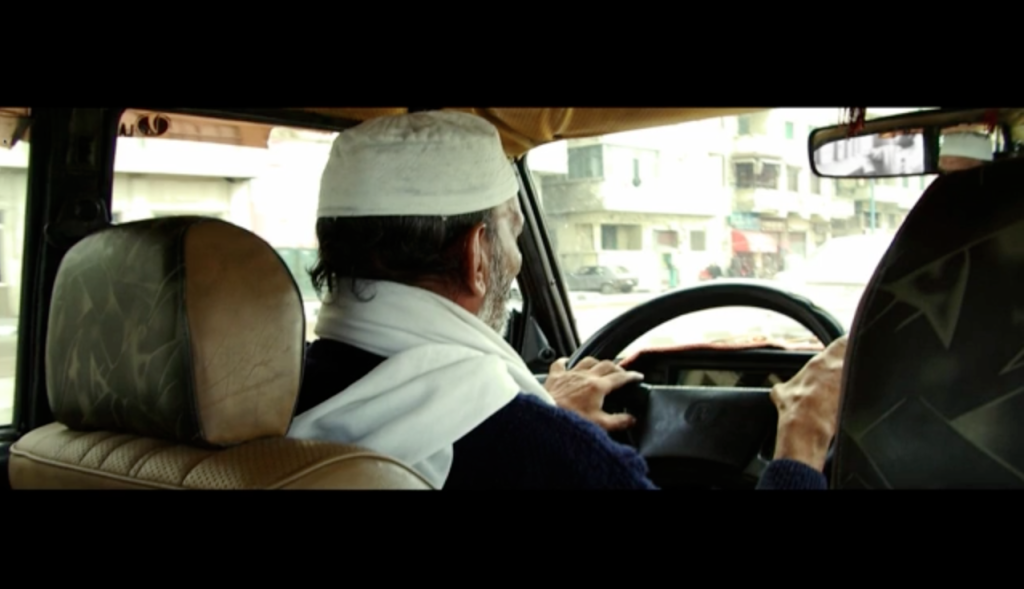 SOMETHING ELSE at OFF BIENNALE CAIRO is an initiative that stemmed from the desire to support the Egyptian art scene and the presence of international artists in Cairo. Under the direction of Simon Njami, seven curators have been selected to take part in the event by generating their own contributions and proposals.

Among the curators invited is Valentina Gioia Levy who for years has explored the relationship between cross-cultural dynamic and artistic practices, with an interest in both global and local geo-political issues, focussing particularly on the complex relationship between east and west. In reference to the vulnerable moment in history that Egypt, North Africa and the entire Middle East is currently experiencing, the curator has reflected on the term ‘revolt’, intended not in its most common sense of ‘rebellion’, but exploring other shades of meaning such as to turn upside down, tip over, shake up or nauseate.

For Something Else, Valentina Gioia Levy presents Liquid Lead Generation, a project that includes the work of four Italian artists born in the 1970s, in the middle of this period known as the Years of Lead. The title of the exhibition alludes to the difficult period in contemporary Italian history marked by social conflict and achievements, but also numerous terrorist attacks and the so-called ‘strategy of tension’ whose goal was to destabilize the political situation and public opinion. The name of the project is also a reference to the expression ‘liquid modernity’ used by Polish sociologist Zygmunt Bauman to mean contemporary society, which he believes is characterized by fragmentation, uncertainty, nomadism and freedom of expression, which offset the abundance of information and the new control and surveillance strategies. It is the management of the flow of information and therefore of learning and knowledge, that has now become the new frontier of power at global level. 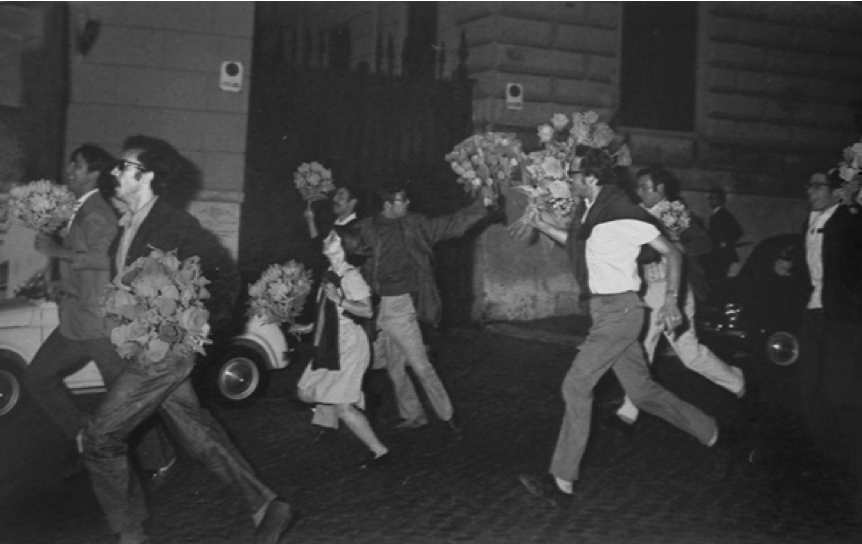 Bringing to mind the image of the metal bullet that melts, changes and becomes message, information or data flow, the title of the exhibition ‒ Liquid Lead Generation ‒ refers to those artists who find themselves in the middle of these two eras, which also correspond to the time between the before and the after-internet. Although their practices differ in aesthetic and formal aspects, and often also for the choice of means of expression, the artists chosen share an interest in the dynamics of power that are expressed through the manipulation of language and communication in general. Whether it is information freely available on the internet, news transmitted by famous international newspapers, advertising by major brands, graffiti, or the coarse writing against the system that appears on the city walls, for these artists the messages are objects to be appropriated and used as tools for reflection and criticism of the same society that generated them. The paradox, irony and mimesis of reality in order to highlight the incongruities are the foundations of their art making. They choose the globalized capitalist society as their field of survey by representing its contradictions and taking on the role of instigators of doubt, reflection and reconsideration helpful to the possible evolution of free thought.

For the series of exhibitions opening at OFF Biennale Cairo, Adalberto Abbate has updated a work previously shown at the Pompidou Centre in Paris, in which he salvaged images of clashes in Italy in the 1970s and replaced the elements of offence, including sticks or other blunt objects in the hands of those taking part in the demonstrations, with bunches of flowers.

In this way, the Sicilian artist produces a détournement of the image – and of the violence inherent in it – turning it into a kind of advertisement for peace. 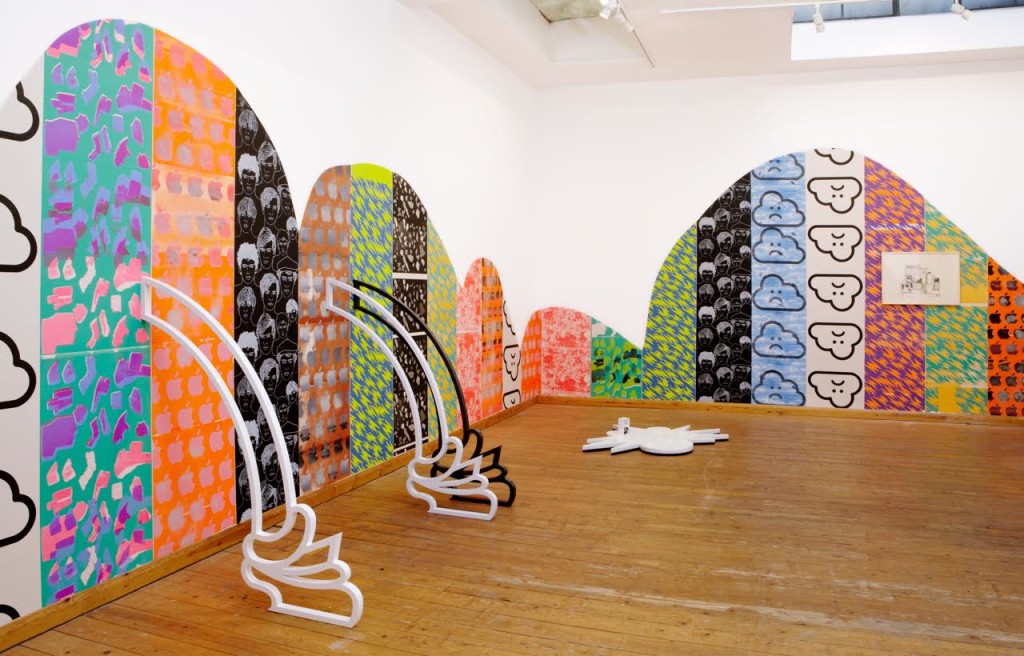 For Ludovica Gioscia, the approach to the image also takes place through collecting, assembling and then reworking with an ironic twist. The enormous amount of images that flood the internet is impossible to assimilate and ‘consume’ in the sense that we are used to attributing to this term. Millions of users browsing every day, in every part of the globe, without stopping, swallow new visual input that they can never fully hold down. As a playful response to this bulimic state of the perpetually online contemporary individual, at OFF Biennale Cairo Ludovica Gioscia presents a site-specific installation composed of wallpaper depicting the Vomitorium Label, a brand invented by the artist, which alludes to the idea of a colourful regurgitation of images linked to the brands of some of the largest multinational corporations that invade the planet. 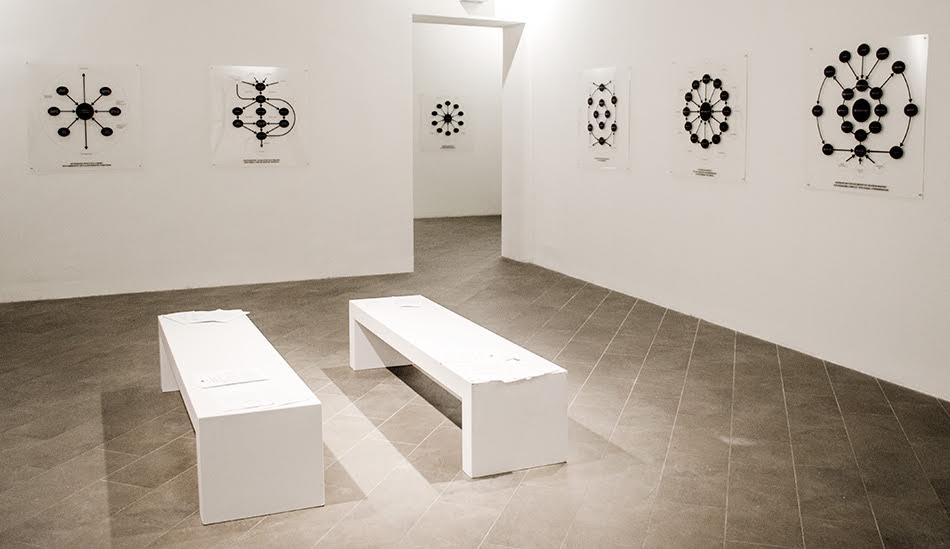 The internet and its potential have always been at the centre of Paolo Cirio’s research. His project Global Direct is based on the utopia of being able to reorganize the idea of democracy using the internet and producing a global decentralization of power through the redistribution of knowledge. The diagrams on display are organization charts of new possible configurations of political and social bodies and form the analogue display of data derived from a study originating from an analysis of scientific sources and conversations with various industry professionals.

Finally, Liquid Lead Generation also includes the new version of the internet installation The Fifth Day by Carlo Zanni, shown for the first time at the opening of OFF Biennale Cairo with permission from Arts Santa Mònica Centre de la Creativitat in Barcelona, which also supported the updating. Called ‘data cinema’ by the artist, The Fifth Day is a generative film that expands the concept of cinema through the use of the internet and the information transfer linked to it. It consists of a sequence of frames taken by Zanni during a period of residence in Egypt several years ago, whose sequence changes depending on data retrieved on the internet including the percentage of seats taken by women in the national parliament, the film posters that appear on the Apple website, and the IP of the last 13 users connected.

The subversion and reorganization of the link between images, data, information, messages and meanings is the common thread that unites the works featured in the exhibition. It is a fundamental part of the artistic practices of this generation for which the precariousness, uprooting from one’s home country and individualism typical of the present age are often accompanied by nostalgia for moments, places and situations of get together and exchange.