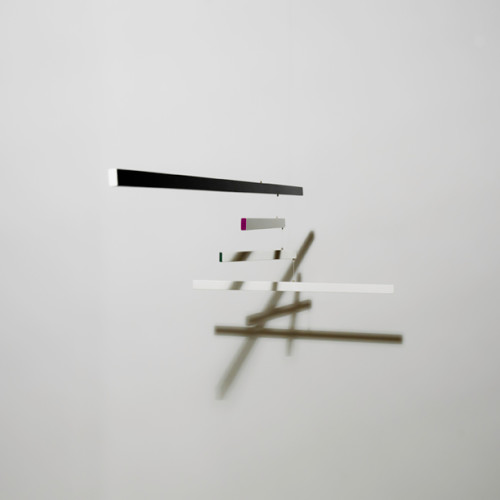 Munari created several Useless Machines in the 1930s and 1940s out of simple, occasionally unusual, lightweight, organic material such as cardboard, wood, squash rinds, rollers, cotton threads, blown glass or a feather. It was not until later that he began to use typically industrial material such as aluminium, plastic, steel wires and metal. 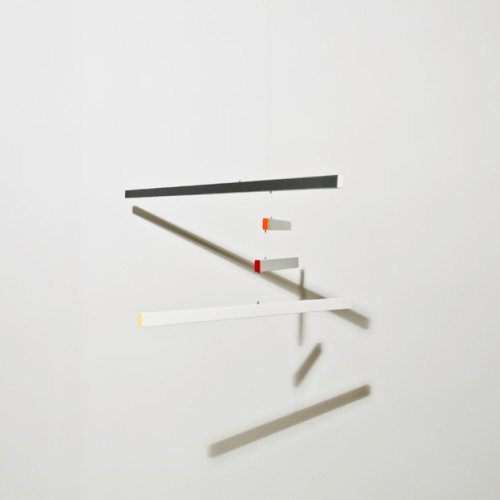 The concept of levers and elementary machinery was used to provide a balance so to be functional to an abstract composition which paradoxically moves by chance, triggered by the slightest breeze. Munari foresees that a too mechanical and rhythmic kinetic, unbroken by chance, ends up becoming a vacuous decoration.

This is why he was concerned about taking full advantage of chance which, similar to what happens in nature, is used to demolish a strictness that is overly rational at times. Historian Enrico Crispolti[1] reminds us of one of Munari’s important statements: «I want to go see what lies beyond abstract art; don’t think that these experiences can be surpassed by going backwards».

Munari summarized the necessary formula to distance concrete abstract art from the cold algorithmic strictness that led many artists, including his travel companions from the Concrete Art Movement, to repeating themselves uselessly: a slogan (the rule and chance). Art and imagination – planning and the unexpected are two fundamental opposites that drove many artists in the 1960s to direct their work towards the creation of kinetic artworks in which chance was a fundamental variable of the project itself. 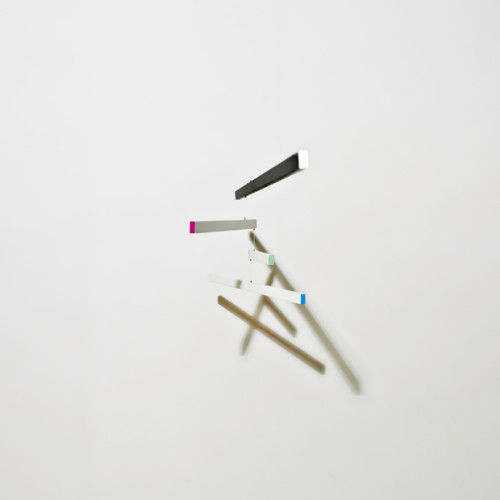 Actually, the idea is simple. It results from the theoretic understanding that the only way to obtain maximum expressiveness is through the balance between chance happening (or, in other intellectual contexts, from the stimulus of one’s imagination or serendipity) and programming (the rationality of thought), by way of the dynamism of opposing energy. This is perhaps the most prominent constant in this artist’s production – from the time of his obviously less than orthodox militancy to his role within the futuristic movement.

Useless Machines are the testimony of a lengthy intellectual process aimed at the attainment of a theoretical synthesis between the need to adopt generative rules and the contrasting demand to break the rule by – for instance – using air currents, moisture or heat, elastic power or friction. 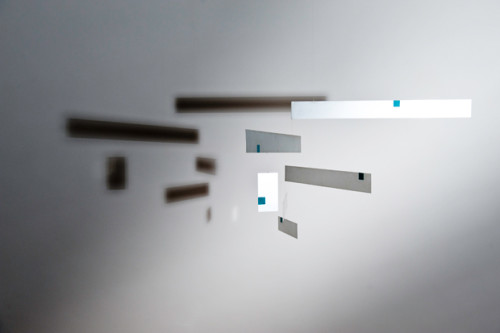 The search for images in dynamic transformation through motion was a constant in many of Munari’s visual experimentations has been stressed in our earlier analyses. At the same time, from the very beginning of his career, the artist developed pictorial constructions in the environmental field.[2] It took place mostly in the 1930s with Useless Machines and then during the 1940s with his Concave-Convex series and also in the early 1950s with Direct Projections and Polarized Projections. 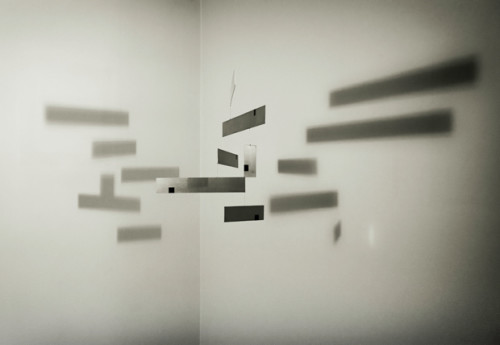 The parameter of space comes into play as an aesthetics, expressive and composite variable. The spectator becomes absorbed in a multi-dimensional environment whose aesthetic result exists in function of spatial, temporal, illuminating engineering, aerial and thermal variables. All it takes is a subtle breeze, the heat of a lamp, the presence of a spectator or the variation in colour of a luminous source to unsettle the environment, generating spectacular shapes that constantly vary.

The observation of the composition in the presented film frames is brought as close as possible by the photographer to the evolution of the machine’s elements, providing the spectator with the spatial sensation one perceives when near a Useless Machine installation or within its operating range. 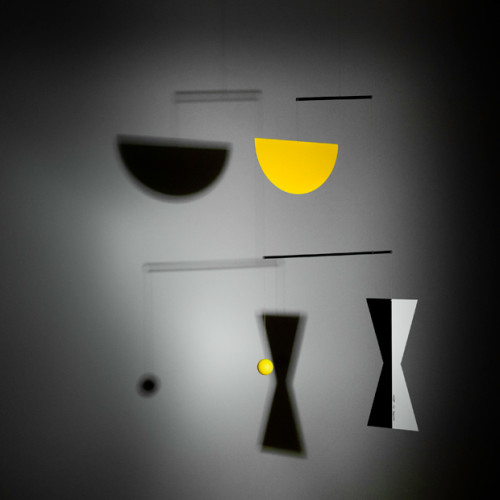 Critic Gillo Dorfles, one of the founders of the heterogeneous group of artists in the Concrete Art Movement, defined Munari as a creator of objects, events and environments [3]. Shadow, the least visible and most evanescent of the machine’s elements, is an important factor to Munari in the spatial placement of a Useless Machine because it guides the spectator towards a world of abstract images echoed by the environments hosting it.

Perhaps the most appropriate way to «contemplate» a Useless Machine is similar to the way in which one listens closely to a sound within an environment. Sound arrives directly from its source but it can also arrive indirectly: by reflection, echoed, partially filtered and absorbed (muffled) or based upon structural and geometric traits (of the material) of the environment in which it is produced. 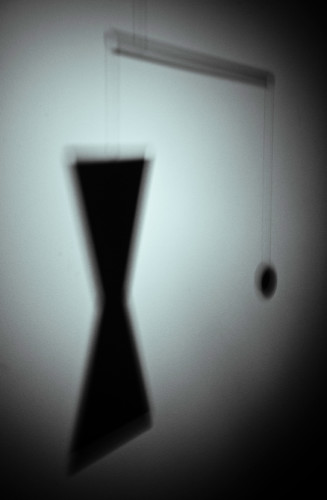 Much in the same way, Useless Machines  – immersed in a neutral space and illuminated by lights whose intensity, direction and colour may vary – can generate either direct abstract images (through the observation of the machine’s mobile elements) or derivative images (created by shadows or their refractions).

Shadows change in function of lighting and, as a consequence, clarity, shape and colour can also vary. The installation of a Useless Machine defines an environment. The spectator comes into contact with the machine’s abstract geometric shapes and the refractions of shapes modified by the environment. The film frames which we have selected illustrate this dialogue are fruitful and aesthetically interesting when well-orchestrated. 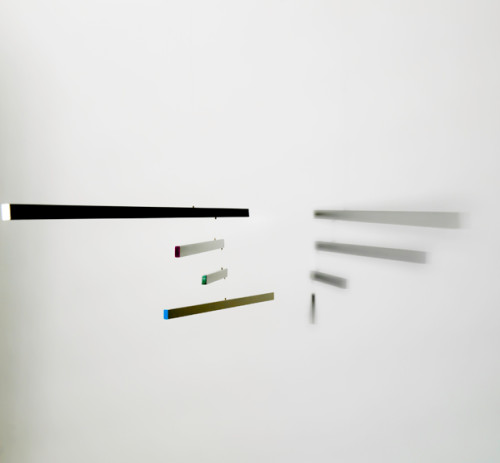 With the exhibition «Bruno Munari Politecnico», The City of Milan and the Museum of the 20th century are dedicating, starting from April 5, 2014, a retrospective to this visionary and versatile artist. Starting from the analysis of his series of Macchine Inutili/Useless Machines Luca Zaffarano reconstructs a full portrait of  Bruno Munari (1907-1998) that Arshake will be publishing on a weekly basis. The Useless Machines reconnect with the many aspects of the artist, illustrated by unpublished photographs by Pierangelo Parimbelli.