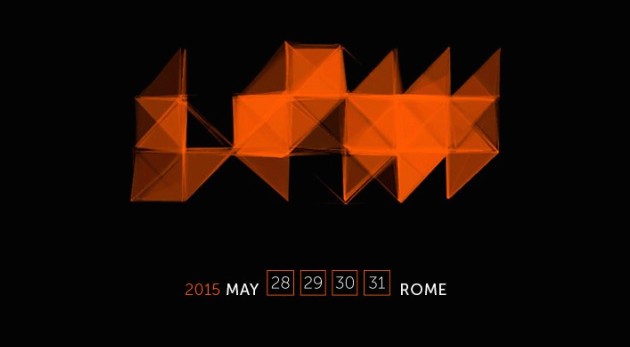 The sixteenth edition of LPM Live Performers Meeting begins on May 28th, 2015 in the spaces of Nuovo Cinema Aquila andSapienza University in Rome.

Indeed this community of artists made the LPM 2014 Eindhoven edition a surprising event. We hosted more than 300 artists, 220 performances, workshops and showcases, recording an overall amount of 39 participant countries. Thanks to the contribution of the European Community, the LPM project foresees many foreign editions as in Minsk (2011),Mexico City (2013) and Cape Town (2013) in addition to those held Rome (2011-2012-2013).

Again, this XVI edition seeks to promote the practice of live video performance, thanks to a rich and unpredictable program aimed at exploring different themes through new audiovisual languages, techniques and technologies.

Vj, artists, designers, professionals and the general public will be involved in the manifold planned activities: from experimental audiovisual performances, architectural mapping shows, and DJ-VJ sets to workshops, roundtables, and presentations of products and hardware, with a special regard for free and open source projects. Meeting areas devoted to the interaction among the hundreds of participants will be the corollary for the whole duration of the event.

LPM is designed as a place of dialogue, comparison and exchange of ideas and information between artists and fans in the field that are accustomed to meet, communicate and interact mostly in the virtual space of the network. LPM encourages research, experimentation, the encounter between different forms of artistic expression, the interaction of multiple techniques and digital technologies, analog, software and hardware. LPM is an unmissable spectacle during which the audience has the chance to meet the world’s largest selection of artists active in the field of live video performances.