For the exhibition “Polia”, curated by Carla Subrizi, Carola Bonfili transforms the Fondazione Baruchello into a portal that provides access to other dimensions. The project, which was specially created for the Foundation as part of the Contemporary Grand Tour combines videos, installations, sculptures and engravings to achieve a visionary, dream-like and primitive narrative. 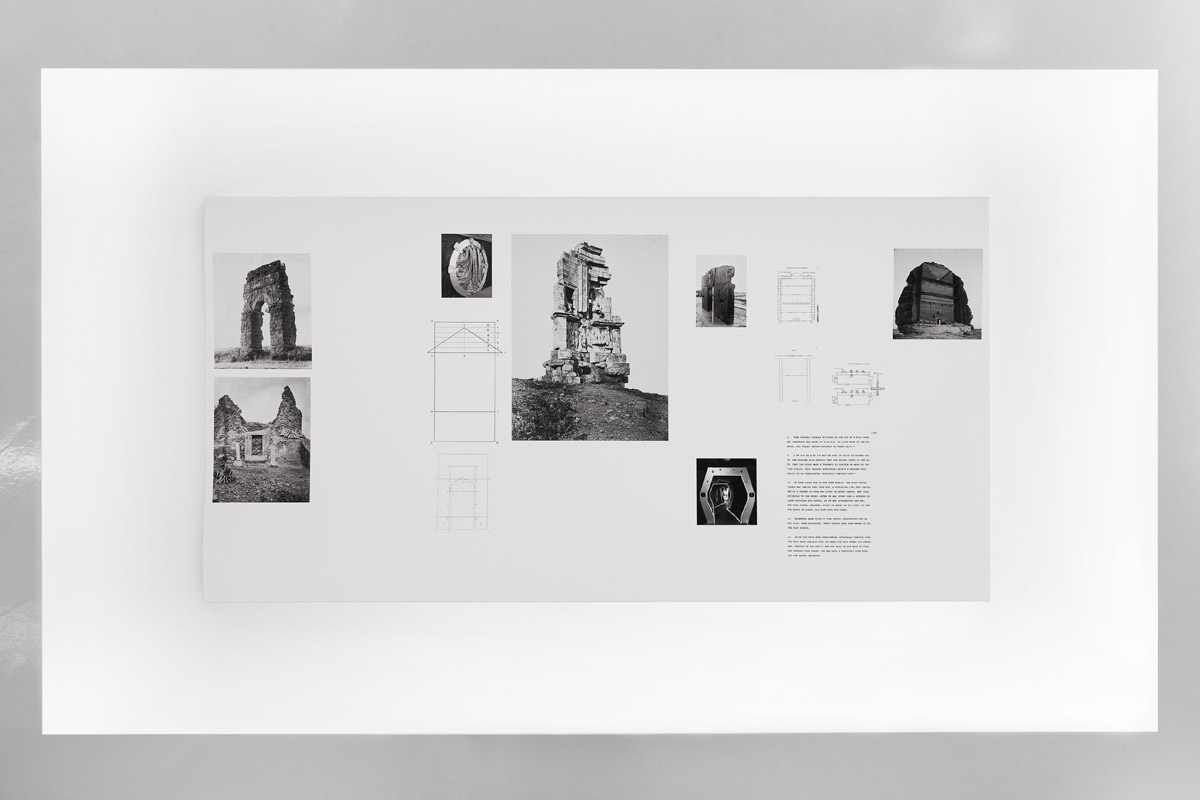 “When activated, these things have been known to alter past events”: the journey in time begins with Portals, a panel that brings to mind the schematic nature of a storyboard, juxtaposing ancient and fictional monuments with texts that suggest the imaginary world of a time portal. The artist approaches time as flux, hybrid and elusive, unfolding as a continuous process of redefinition. This operation reflects Benjamin’s notion of “allegorical reading”, in which the remnants of the past come alive and can be traversed precisely because they constitute the foundations for new monuments. 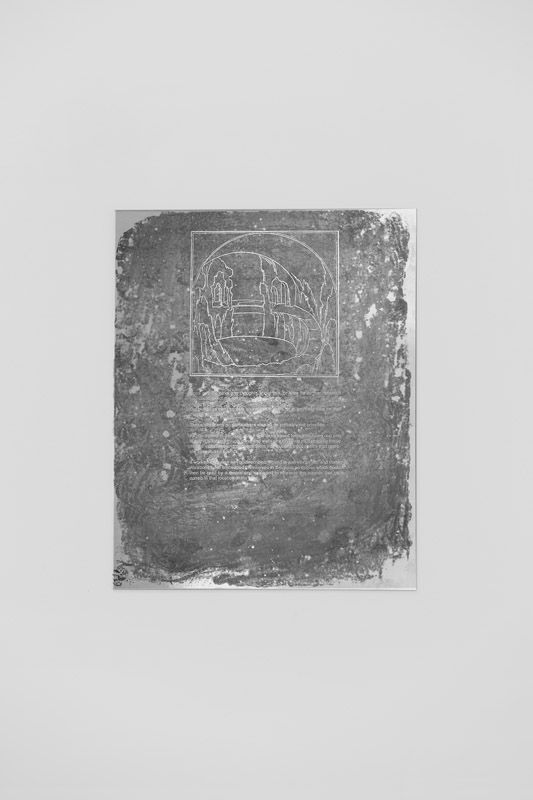 In the work Parallel Thoughts, some of Hypnerotomachia’s illustrations accompany contemporary chat conversations on four zinc blocks whose surface reflects the surrounding environment and adjacent bodies. Bonfili’s work pays special attention to the setting, the venue and subject with which a specific relationship with the spectator is established. From the Renaissance spaces of Parallel Thoughts to the aerial perspective capturing areas of landscape which can be seen through the installation Tre strade facili e una difficile (Three easy roads and a difficult one), the spaces created by the artist appear to be multiple, enclosing a dialectic tension between inside/outside, real/imaginary and tangible/intangible. The space thus becomes the protagonist of the inter-temporal experience. 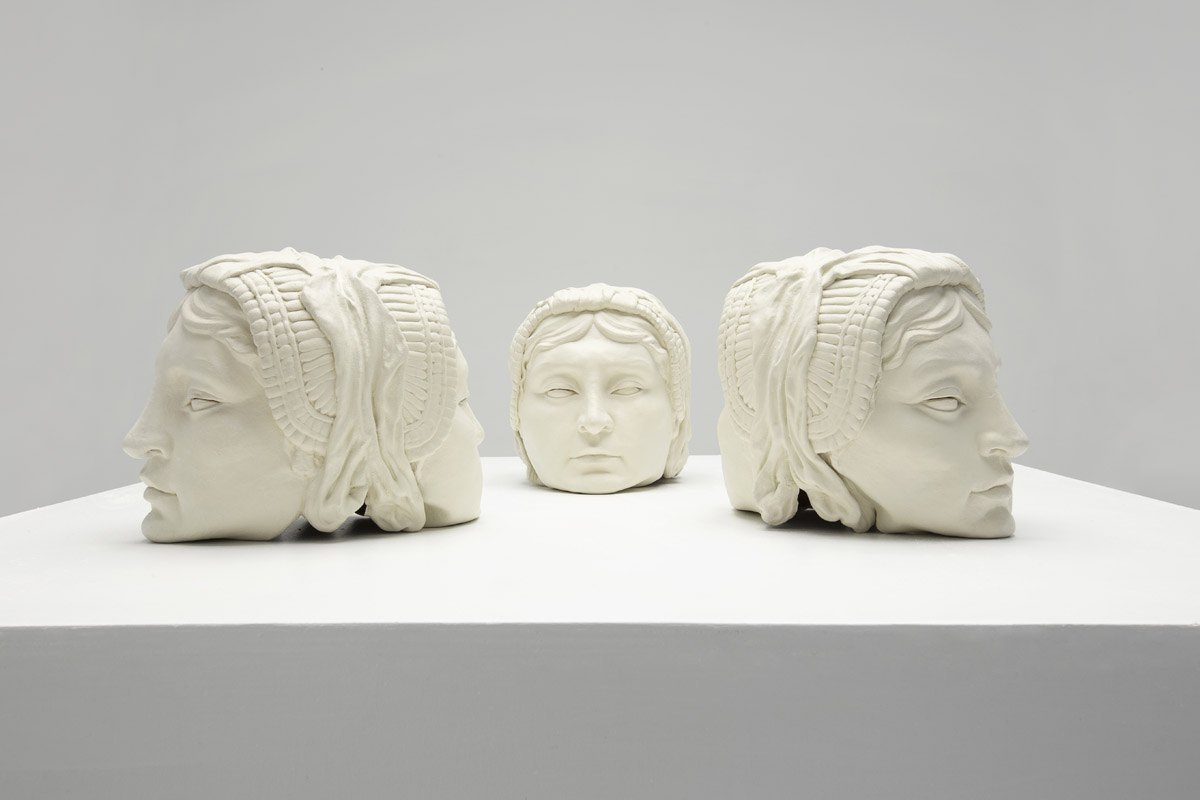 One room is dedicated to the video Polia which transposes verbal and iconic elements present in the Hypnoteromachia into an initiatory female journey. The film narrative expands into the ‘real’ space where scenic elements, such as the bags of Body/Heads, are re-proposed, echoing the instructions dictated by the narrating voice: “remove the head, but leave the body alone.” Even the two-faced mask sculptures appear in the film, covering the faces of the three nymphs living inside the screen. Francesco Fonassi’s soundtrack follows their journey from an ethereal forest covered in snow to the carnal setting of a cave steeped in red light. The nymphs wear white tunics on which another xylographic symbol from the allegoric novel attributed to the Dominican monk, Francesco Colonna, appears – a symbol used in turn by the prominent writer of the Roman Republic, Sallust. Quote after quote, the palimpsest becomes more complex and layered. 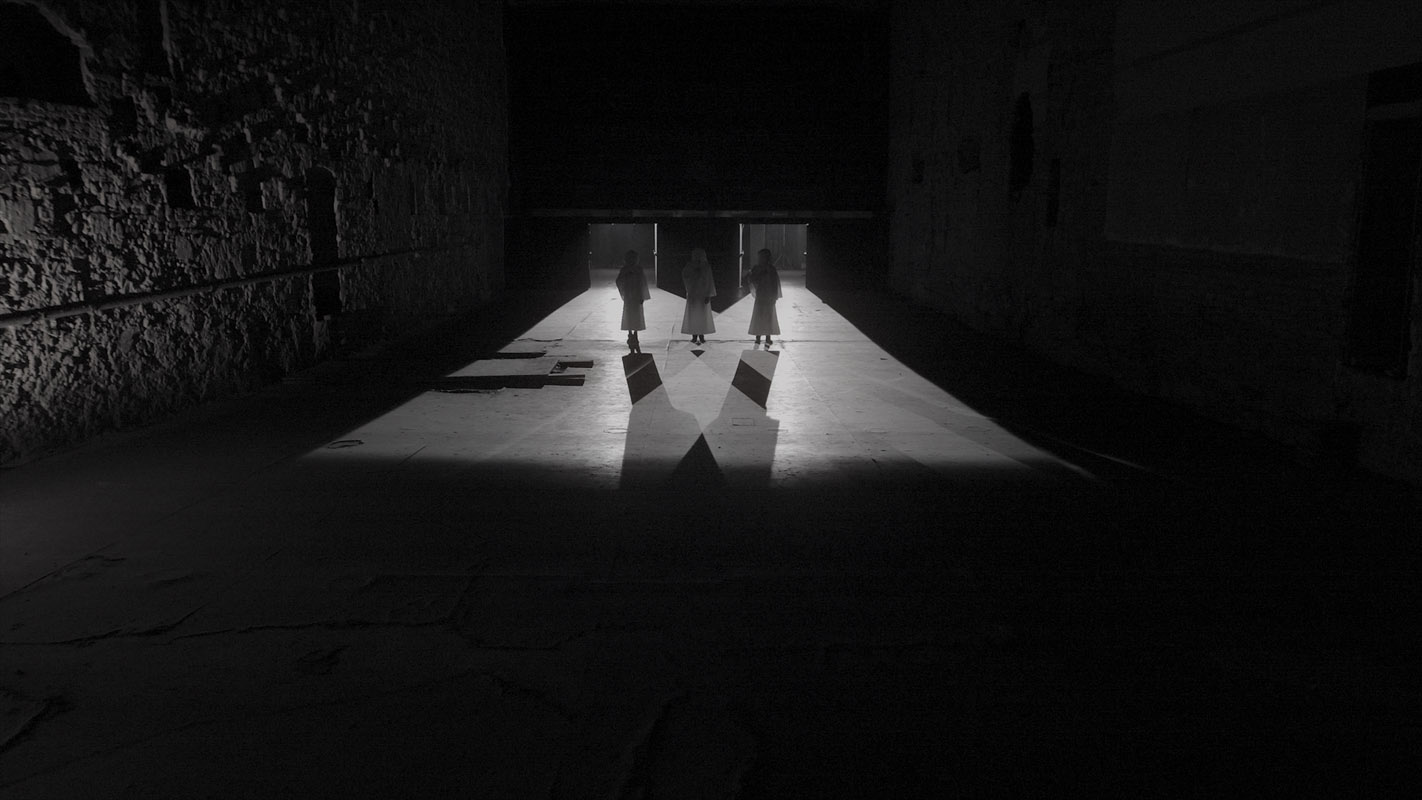 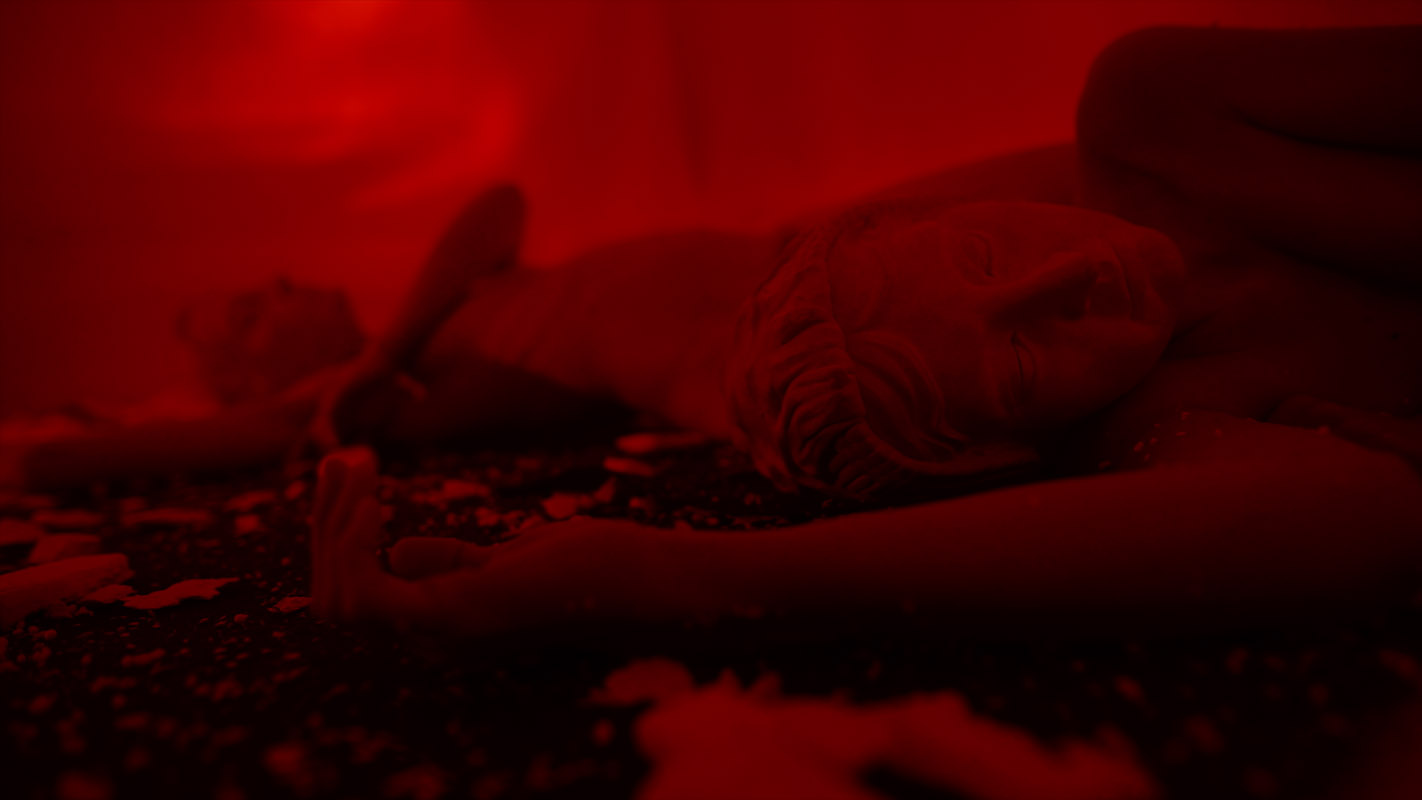 In the in-between space separating one world from another, women undress, uncover their hidden faces and reveal multiple faces in one gesture, reflecting disintegrating identities. The transition from a well-defined landscape to the grotesque space in which an orgiastic ceremony takes place recalls the liminal phase present in rites of passage which, according to Van Gennep, define life itself: «life itself means to separate and be reunited, to change form and condition, to die and to be reborn» (Arnold Van Gennep, The Rites of Passage, 1909).

Carola Bonfili’s mnemonic gaze captures the artefacts, pathosformeln and archetypes beyond borders. From the purity of Platonic love to the primitive qualities of the naked body, the time machine records the travels of a Beyond that unsettles the foundations of time and space. 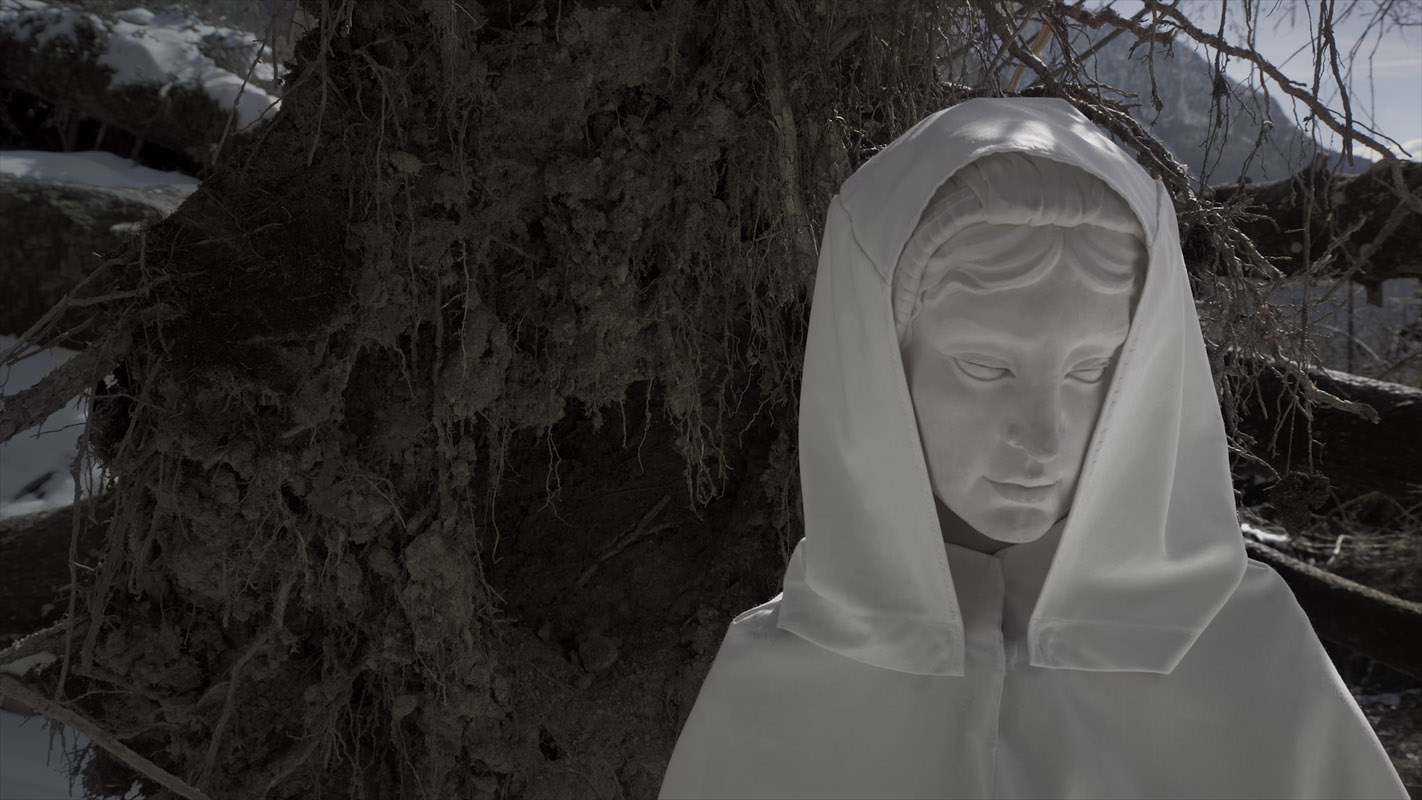 Polia, curated by Carla Subrizi, a project by Carola Bonfili, in collaboration with Francesco Fonassi