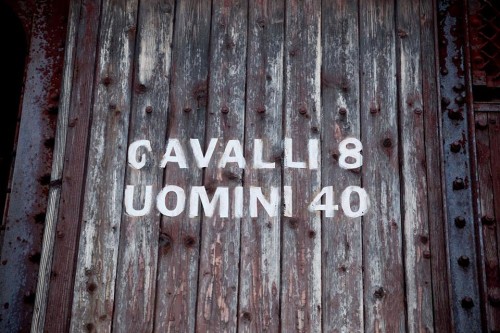 The work of Ciro Vitale (Scafati,1975) is a window on history and at the same time a mirror in which the self is reflected. «Cavalli 8 uomini 40» [horses 8 men 40] is the inscription on a wagon once used for the deportation of Jews, and the inspiration behind the title of the work. This vehicle, together with an M4 Sherman tank and a Willys Jeep, is placed in the space in front of the Museo dello Sbarco e Salerno Capitale, and it forms part of the artist’s solo show, the result of a collaboration between the Fondazione Filiberto Menna – Centro Studi d’Arte Contemporanea and the museum, curated by Antonello Tolve and Stefania Zuliani. 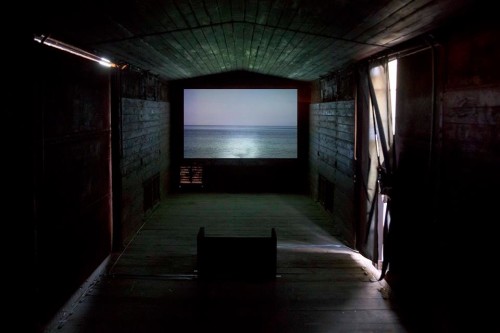 Vitale’s work is integrated into the existing collection from the entrance to the wagon, which “receives” the visitor into this deadly and claustrophobic box in which men and animals were transported towards a shared fate. The use of video, a predominant medium frequently used by the artist, lays a bridge between past and present; the projection disrupts one wall of the carriage, showing an endless stretch of water, a calm and unsettling sea which conveys the tension of waiting and the hope of a berth. The backing soundtrack is a moving train which simulates the waves of the sea, a sound which, in a space without time, associates the Jews despatched to concentration camps and the migrants who cross the sea, both heading towards a conscious end. 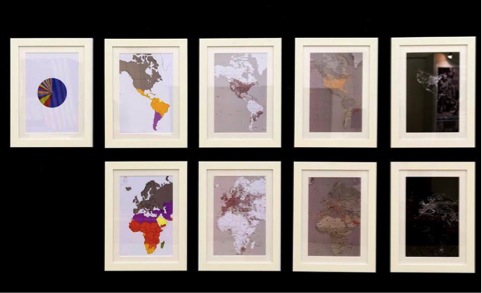 Inside the museum, three diptychs of digital images are arranged on a wall dividing the space: these offer a perspective on the political and economic disorder in contemporary society, leading us to reflect on the growing squandering of energy that characterises our present, a bulimic reality, greedy for power and control, built upon horror and the abuse of power.

Opposite, a large white telescope becomes a chink through which to observe the past. A device that induces visitors to wink at the past with one eye, while forcing them to look with the other at images that narrate the prelude to the contingent circumstances. The telescope points at a cartography which shows the contradictions of the modern world while simultaneously revealing the effects of colonialism: inside it, like hypertext, five short videos are playing. The documentary images make up the chapters of a virtual book in which the facts that have determined these same differences are observed and retraced, allowing the viewer to rediscover a forgotten critical conscience.

A polyptych, then, held together by the hinges of memory, made with the valuable materials of  an artistic research and practice which belies the expectations of modern society and deconstructs the present through the metaphors of lived history, seemingly overlaid by a current history that follows the same ductus, constantly rewriting itself in the same way.