Luminaria is the 2015 edition of the Festival of digital art in Rome, promoted by Romaeuropa Festival, which has always been active in interdisciplinary fields (especially where new technologies and artistic languages meet), aiming to bring together experimentation and production by establishing relations with the territory and its various realities.Luminaria continues the celebrations of the International Year of the Light and gives centre stage to this intangible yet concrete element which is a focal point for progress, the framework for electronic art but also for the era of informatics and everything that follows from and is accomplished by it in the artistic and social spheres (which often coincide). 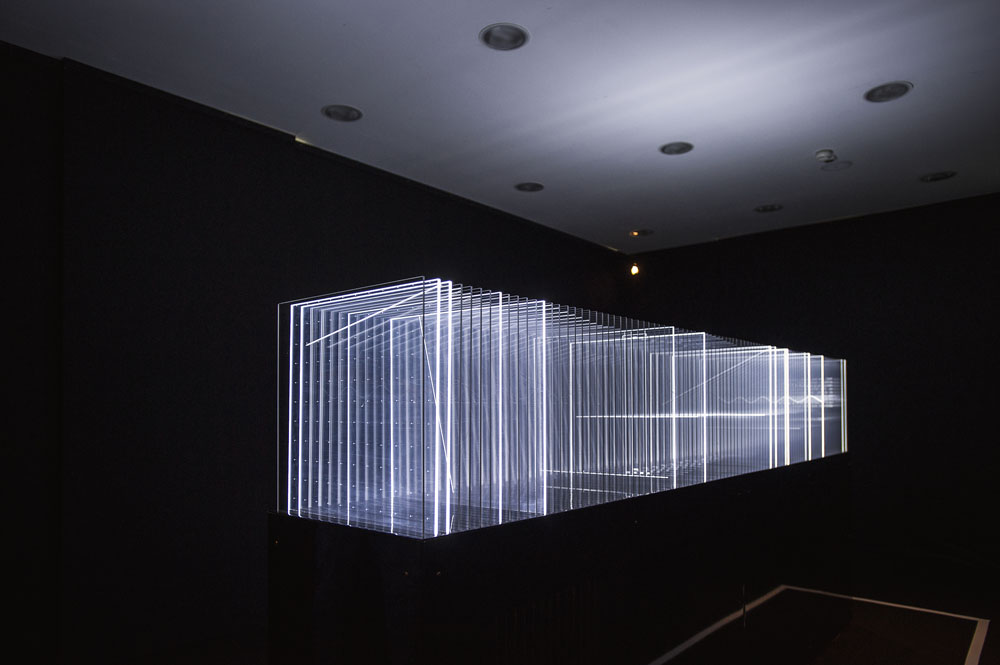 In addition to major partnerships and local and national collaborations, this edition of the festival was organised in collaboration with Elektra, Montreal’s Festival of Digital Art, consolidating the partnership of Le Fresnoy- Studio national des arts contemporains (Tourcoing, France), with backing from the Québec Italia Delegation – Conseil des Arts du Quèbec, and partnering by the General Direction of Contemporary and Suburban Art and Architecture of MiBACT [Ministry for cultural heritage and activities]. The theme of light is explored through a wide range of works, reflecting a similar range of aspects linked to technology and its applications in the creative field, but also its social consequences. We take a look at the works in the exhibition, which forms the basis of an extremely rich programming of events and encounters.

With his Frequencies (Light Quanta), Nicolas Bernier turns the spotlight on the quantum, the smallest measurable value of energy, which has given rise to the study of quantum physics in order to envisage the universe as consisting of particles and extrapolate the equivalent scale for our natural (and artificial) universes. In this work one hundred plexiglass plates are struck by a beam of light which then unfolds in time and space in a sequence of sound and light. 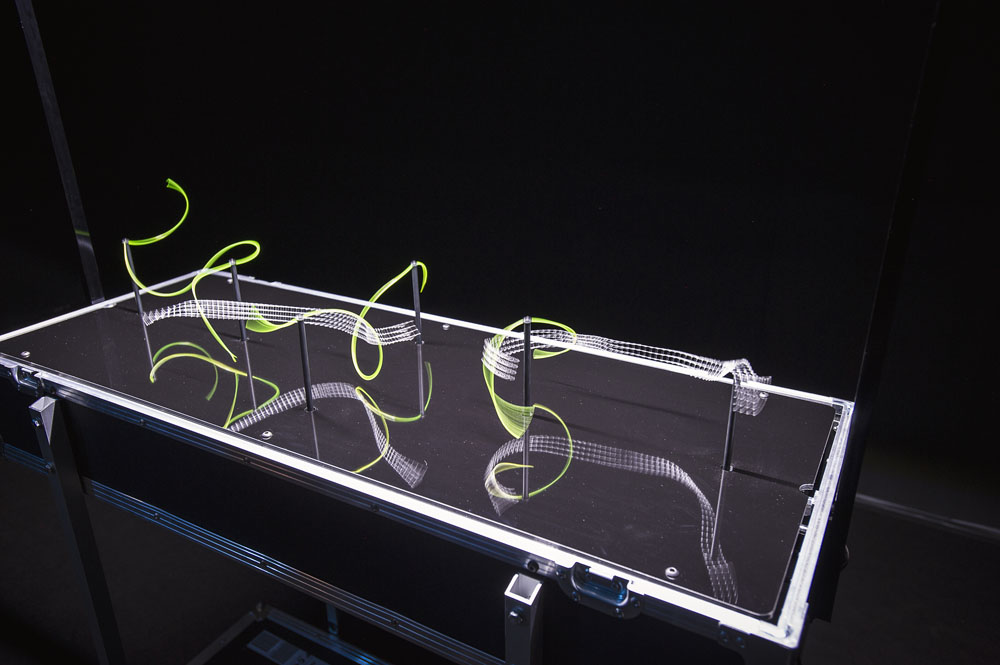 Film editing, specifically the so-called “jump cut”, is at the centre of TemporAIR (2015) by Maxime Damecour. A ribbon of metallic mesh held on supports and connected to speakers is illuminated by strips of LED lights and changes its position as it is assailed by acoustic vibrations. The strobe lighting divides the scene into a series of frames (a reference, clearly, to the particular film editing technique).

The three luminous sculptures that make up Breathless by Russian artist Alexandra Dementieva connect their existence and their brightness to information circulating on the web (the two sculptures linked to emotional factors), as well as to the physical and environmental qualities of the surrounding space. The brightness of the first two sculptures increases or diminishes according to the frequency of words connected to the concepts of fear and love appearing in real time on the web; while the third sculpture is sensitive to changes in its surroundings. All this finds new mutating factors with the interaction of visitors, who are invited to go inside the cages forming the basis of the sculptures and blow onto a sensor. 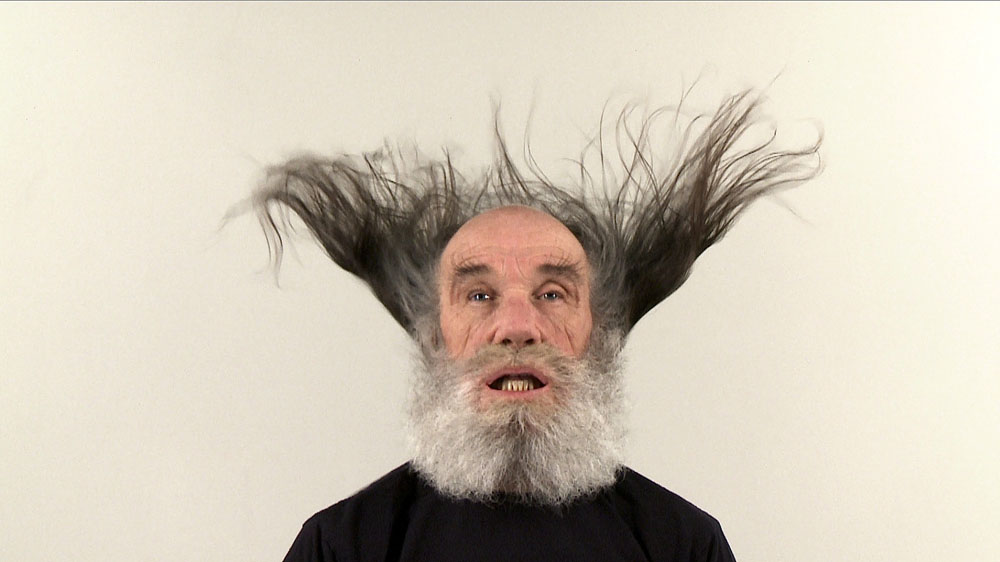 With Jean Dubois’ portraits in Tournmente (2015), the breath is once again used to modify expressions, but this time it is filtered and transmitted through a mobile phone, thus activating an ironic and playful exchange between the physical and the virtual. Visitors are invited to dial a number and blow into the microphone of their phone; their breath passes through the screen and reaches the displayed faces as a gust of wind. 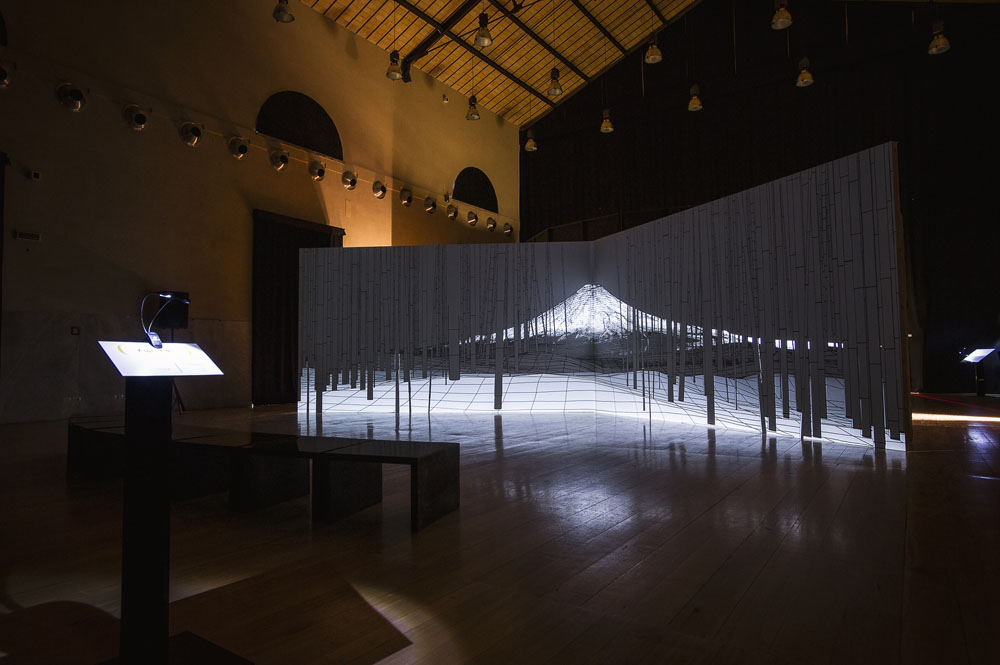 In an exhibition which explores technologies and their relationship to various disciplines, there is also room for drawing and links with tradition. These two components provide the foundation for the visual and sound landscape of Fuji, which Joanie Lemercier drew entirely by hand on a large scale. It represents the forest at the foot of the Japanese volcano Fujiyama, and onto this backdrop a series of images are projected, juxtaposed with tracks of classical music and sound recordings created by Paul Jebanasam to illustrate the legend of Kaguya, a 10th century folk tale and still a key element in Japanese culture.

Light is the protagonist once more in the film The Lack by Italian collective MASBEDO (Nicolò Massazza and Iacopo Bedogni), in which four stories of life experience, told through performance and in interaction with ancestral landscapes, speak of the contemporary female condition, particularly in relation to the feeling of lacking. Light and sound are at centre stage in Massier’s work La Boîte Noire (2015), where a glass display case, filled with smoke and suspended in mid air, is traversed by beams of light from a projector, translating sound waves into three-dimensional forms that materialise in the smoke. 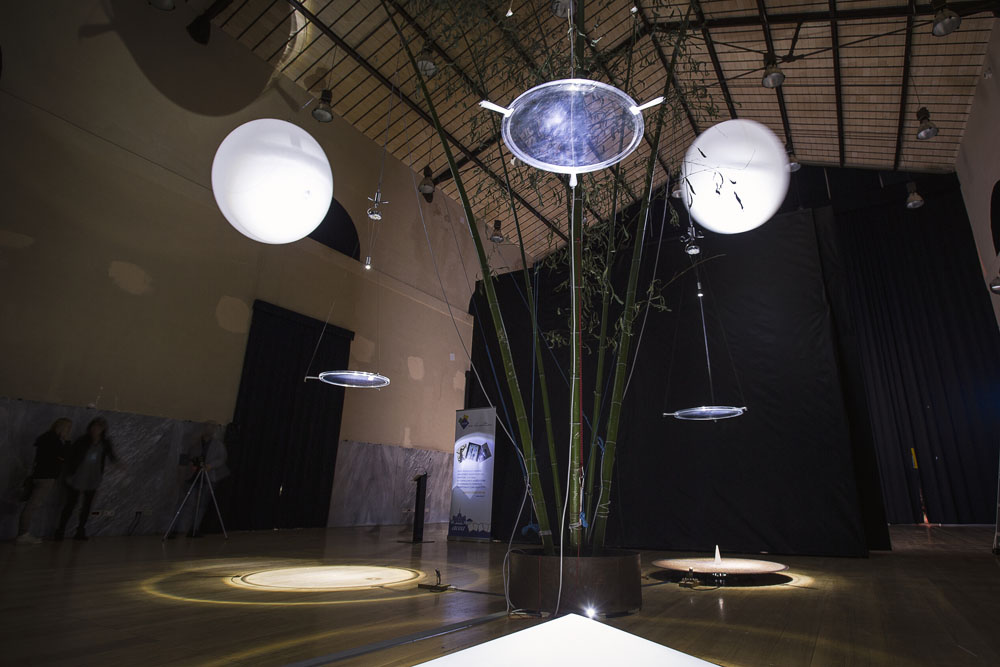 Liquid surface and sound are the basis of Idrofoni o Lampade sensibili (2009-2015) by Pietro Pirelli, whose Arpa di Luce featured in the previous edition of Digital Life. Water and light dance together, forming a series of changing shapes in response to outside stimuli (words, song, sound etc). Samuel St-Aubin’s kinetic sculptures in De choses et d’autres introduce the relationship between humans and machines with an ironic play on balance, constantly brought into question by the possibility of error, which is the starting point for change – equally true in the natural world and the artificial.

From the universal reality of the quantum world to the technological hell of Bill Vorn and Louis- Philippe Demers. In Inferno, a performance of lights and sounds is programmed on the exoskeleton of a series of robots, and activated by visitors and performers who lend their bodies to the movements dictated by the robots.Thus man and machine confront each other in their respective lives and in the outcome of their meeting, made possible by light – the oxygen of electronics, informatics and digital life.

Around these works is a multitude of events, video sessions and performances (such as the four transparent spinning tops of Myriam Bleau’s Soft Revolvers, which translate movement into musical algorithms, and The Blind Robot, where robotic arms examine the facial features of visitors in a tactile encounter). A packed programme of events touches on a host of current issues regarding the world of technology, from market aspects to questions concerned with new ways of teaching based on interactive community projects, like the upcoming blind.wiki (17,00 on 3 December at La Sapienza University of Rome).

The Luminaria website will keep you informed of forthcoming events until the close of the festival on 8 December 2015. These include the symphonic concert of light The Enlightenment on 28 November (MACRO – La Pelanda) by Quiet Ensemble, the duo responsible for the site-specific project created for the Arshake banner, on show until 30 November.