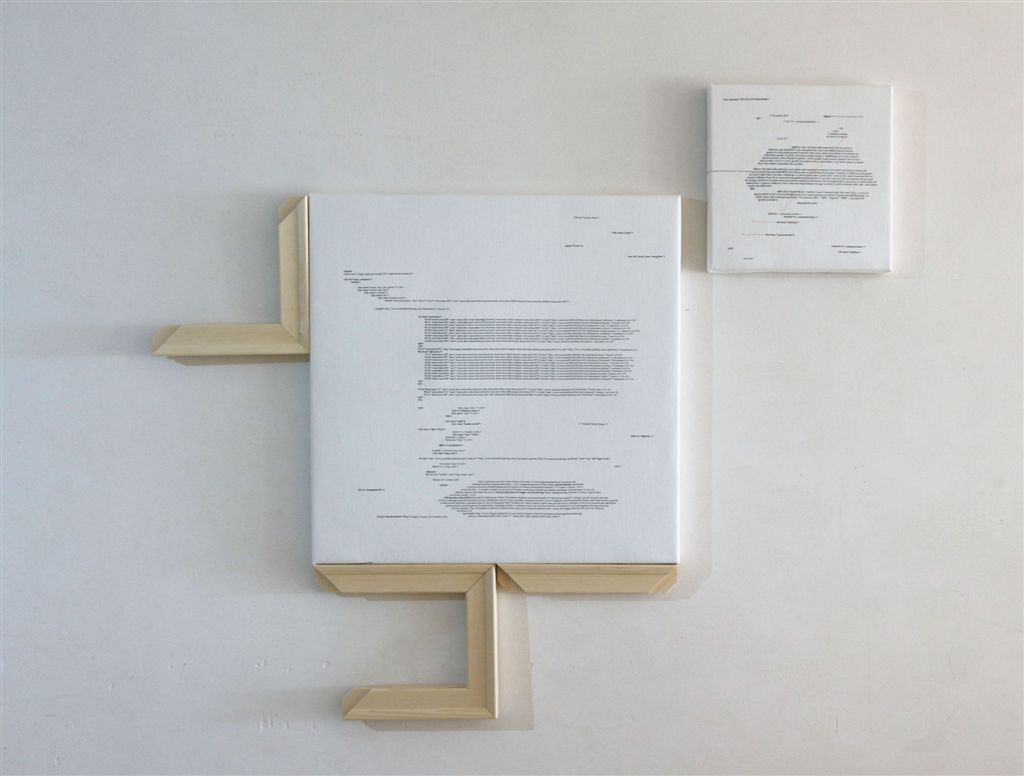 Donatella Lombardo presents a consistent corpus of work in a her  created specifically for her first solo show in Bologna. The exhibition’s title is a reference to the term remediation coined by media theorists Jay David Bolter and Richard Grusin who affirm that the content of digital media is the “representation of one media in another” beginning with the oldest forms of analogue communication.

Through her original artistic quest, she interprets and reveals to us the structures and critical situation contemporary information is facing. She explores the technologies used for mass communication and, more specifically, communication via Internet and the resulting evolution in today’s written and spoken languages. Her intention is to take the wraps off (artistically speaking) the mechanisms that sustain and make the Net useable by proposing graphic and narrative elaborations based upon modern-day media flow regarding information. It is precisely from within this media flow – concealed (at times) or abandoned upon various data carriers – that Donatella Lombardo draws fragments of texts which she displays bridled to a canvas like traces of that Orality and Literacy which, for so long, occupied different physical spaces to express thoughts and experiences of people of all walks of life and are now made up of an amalgamation of miscellaneous forms of communication where the word, sound and image are melded together to coexist in unison like a single entity ready to mould an identity that was put together for us. 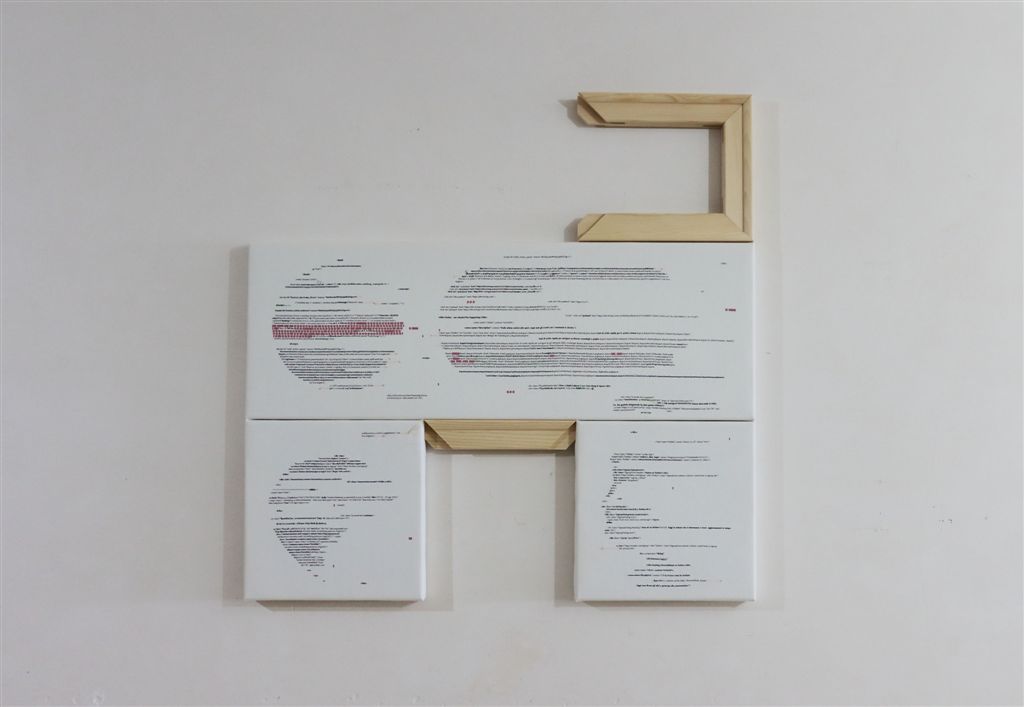 Her media deconstruction-reconstructions are often metaphorically represented as ancient “darns” made with needle and thread, to reconstruct and keep the memory of the permanent tie that links our present to our past and of the fact that whatever we are today is the result of the information that has been passed down to us by those who lived before us and that the fate of humanity depends on what we are now able to convey about ourselves. 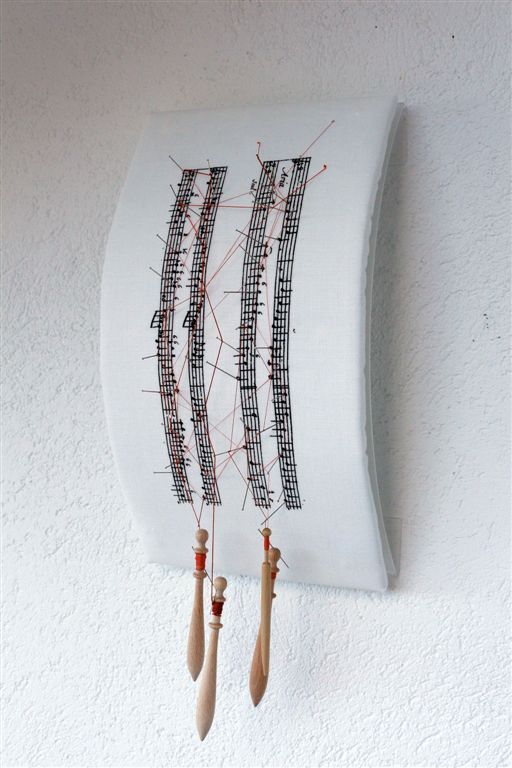 Lastly, the body of works created specifically for this exhibit entitled Partiture Mute (Mute Scores) dedicated to the singing women of the bygone days. Needlepoint embroidery is associated with bobbin spindles, an ancient embroidery tool used lovingly by women in the past – especially those used in the beautiful island of Sicily, the native land of Donatella Lombardo. 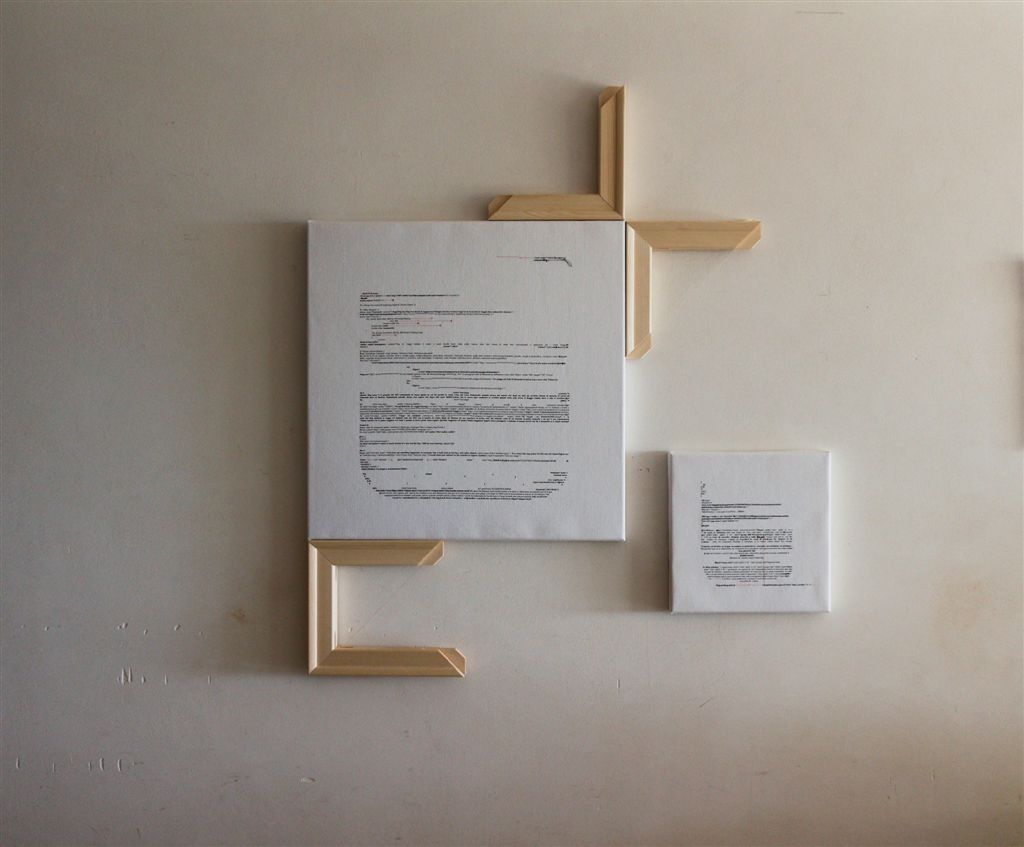 Donatella Lombardo was born in Erice in 1980. She began her formal training at Bologna’s Academy of Fine Arts and earned her diploma with a thesis entitled Geografie dell’immagine i percorsi del filo (Geography of the image and journeys of thread). She continued her studies at University of Bologna’s Literature and Cultural Heritage Department and attained her Bachelor’s Degree in History and the Preservation of Works of Art in 2012 with the presentation of a thesis entitled La percezione visiva del colore nei dipinti e gli effetti dei nuovi media nel restauro virtuale (Visual perception of colour in painting and the effects of new media upon virtual restoration) which was awarded as the Best Thesis of the Year by the Ravenna Chapter of Soroptimist International. She has participated in numerous exhibits, the most recent of which include collaborations with the Riso Museum in Palermo, the CAOS (Centro Arti Opificio Siri) in Terni and the MAMbo Museum of Modern Art in Bologna where she also acted as co-curator for the presentation of the Autoritratti I. Nuove Gen(d)erazioni (Self-portraits I. “New Gen[d]erations”) project in 2013 where she joined forces for the first time with Uliana Zanetti, the woman who designed the entire Autoritratti. Iscrizioni del femminile nell’arte italiana contemporanea (Self-portraits. Participation of Women in Italian Contemporary Art) project in 2013. Lombardo’s artistic quest is based upon the analysis of perception in relation to the influence of new communications techniques and the study of their evolution (from the origins of the written word to digital communication). Walter J. Ong, David Bolter, Richard Grusin and Marshal McLuhan are some of the authors who have had a major impact upon this quest. McLuhan in particular was the inspiration for the work entitled Il medium è il “messaggio” (The medium is the “message”), the winner of the first edition of the Prima Pagina Art Prize, a competition promoted by the il Resto del Carlino newspaper and Quotidiano.Net in collaboration with Banca Popolare Emilia Romagna. The event was hosted at the 2014 International Contemporary Art Fair in Bologna and curated by Valerio Dehò. (dal communicate stampa)

Jacopo Jenna. Come as you are.