Donato Piccolo has designed a creative itinerary for GABA.MC (The Fine Arts Gallery in Macerata) that focuses on atmospherology as a natural phenomenon as well as a manipulation of our feelings. This visual path exists in its manifestation and the way it becomes a watery mist or a luminous sound by way of aesthetic effects used to erase a fictional structure and give rise to an aspect of nature’s fair expression.

Donato Piccolo takes a philosophical approach towards natural phenomena and emotional factors that capture the eye of his spectators to lead them into an irresistible and seductive atmosphere in his display of a series of works whose common denominator is the ecosophical reflection upon the dematerialization and rematerialization of elements, on weight and lightness, on the naturalization of the artificial and the artificialization of nature. 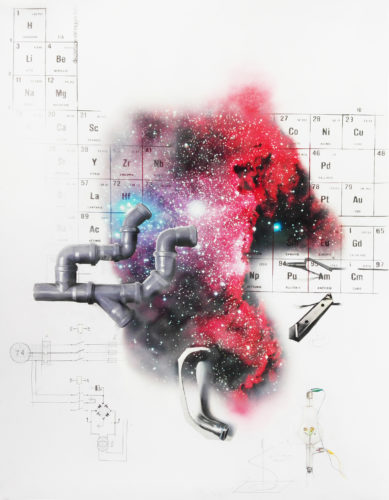 Alongside a series of important works created over a decade, the exhibit proposes a series of drawings and projects – these were also done over different periods and temperatures – that unearth atmospheric phenomena and show the artist’s grammatical analyses, his brilliant intuition and his effervescent examinations of the most current issues regarding art and science.

Donato Piccolo was born in Rome on 14 October 1976. After earning his degree in Philosophy and attending Rome’s Accademia di Belle Arti, Piccolo was the assistant of Giacinto Cerone and Sol LeWitt. His discovery of Klein, Fontana, Beuys and Gino de Dominicis (il les appelle «les magiciens») was decisive and constructive to his career. His work develops around various areas of research through his elegant combination of science, technology, art and philosophy much like that of his illustre prédécesseur Maurizio Mochetti whom he considers his «père spirituel» (Rosemberg). Most of his work associates two aspects that are complementary and inseparable: they are sculpture and machines, shapes and processes simultaneously. In Donato Piccolo’s opinion, this hybrid characteristic is the true nature of «holistic art»: the kind of art whose essential purpose is to explore the «incomprehensible mystery of the visible world». His work takes an in-depth look at the natural, physical, biological and scientific phenomena established at the foundation of life itself by using the emotional aspect as his instrument.