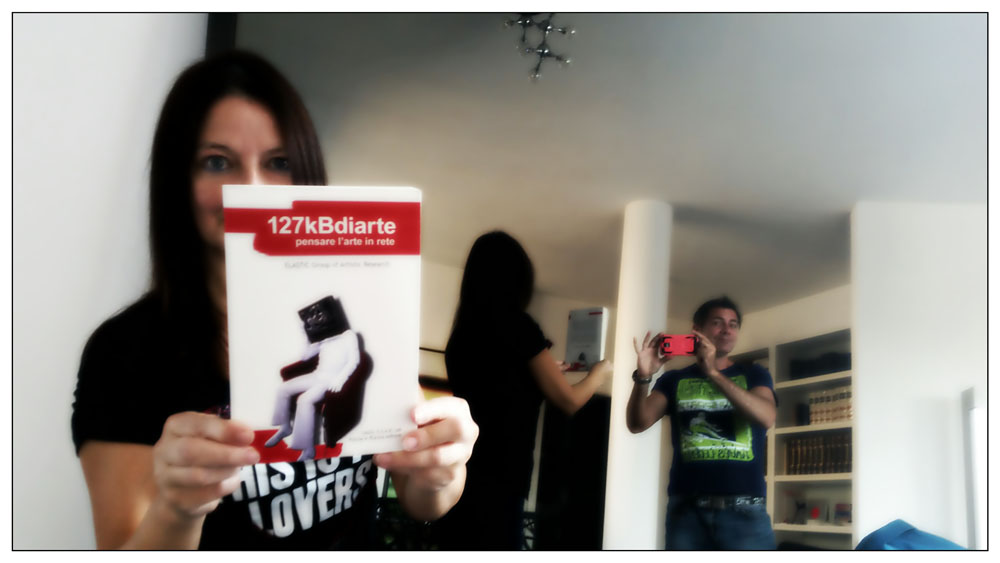 With 127kBdiarte, published by Psiche e Aurora (2015), the duo of artists and theoreticians known as Elastic Group of Artistic Research launches a web-based method of co-writing and thinking. A blog active since 2011 is redesigned for codification into print, making the printed medium complicit with connective thought as an open and updatable tool, ready to be reintroduced in a network enriched with new connections, both analogue and virtual. Readers are invited to fill empty spaces with their reflections, with the possibility that these might rebound in the space of the network as new stimuli for discussion on the blog, to be transferred once more into print in the near future.

The issues addressed concern art, but the focus widens from art to actuality. Indeed, the book opens with some universally relevant questions: “What is the meaning of creating?” “What is the meaning of idea?” “How do we move from idea to action?” The discussion bounces from the general to the specific, re-framing art in a contemporary dimension and detaching it from the specificity constricted by current usages and largely limited to the world of experts; above all, detaching us, the readers, from passive and uncritical enjoyment. In an article for the daily Il Sole 24 Ore, Simone Arcagni describes the book as “a volume which intentionally reaches no conclusions, does not close questions but rather opens them, identifies new ones from a philosophical standpoint. A tenacious book that brings into discussion concepts which appeared settled, and forces us to re-examine them.” (S. Arcagni, Il Sole 24 Ore, 23 October 2015, transl. from Italian). 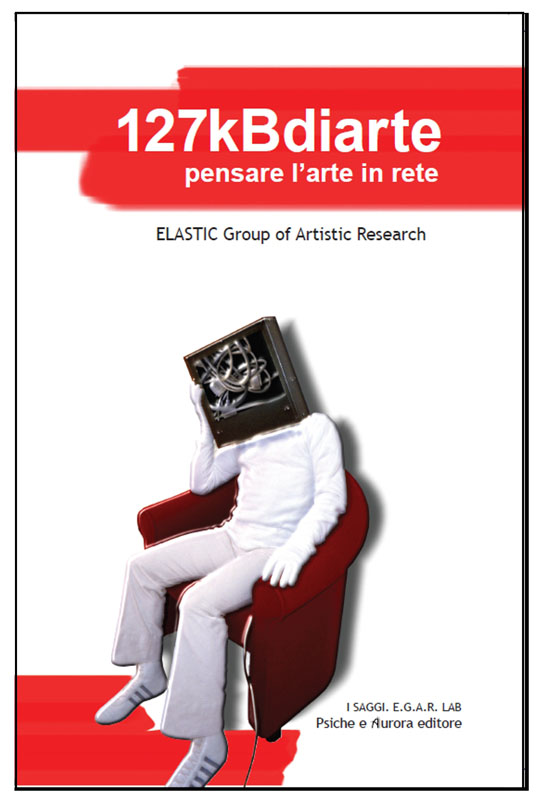 We get to the heart of the book in a conversation with its authors, which puts us in the mood for the web-based thinking with which they invite us to acquire and conquer “connective thought”:

Elena Giulia Rossi: How did 127 kb di arte and its practice come about, and how did it transfer from blog to print?

Elastic Group of Artistic Research: If you want to address the topic of “thinking about art on the web”, what better way than by developing the thinking itself? From solitary thinkers, shut up in our own rooms by the Kantian stove, to a blog platform where we were asked questions and internet users responded to them: in this way meaning was given to Duchamp’s motto “art is made by the public”. The title 127kBdiarte refers to the specific weight of the memory of digital text on art. The blog has been active since 21 February 2011. The web phase was followed by a period during which we selected the comments and posts that were interesting to an international public, leaving each one in its original language (Italian, Spanish, English, Portuguese).

I increasingly come across printed collections of texts or blog posts which retain the format of a blog literally transcribed onto paper. How did you manage to “transcodify”, rather than transfer, web-based though into the printed medium, creating an original format which is open to new cross-fertilisation between the virtual world of the blog and the world of print?

Translating the language and grammar of the internet into print was a real challenge, which required lengthy research and close attention to detail: choosing the right publishers, Psiche e Aurora (with links to the classic avant-garde), creating an imprint (I Saggi di E.G.A.R. LAB, Laboratorio sul pensiero e la scrittura connettiva), establishing a format (which would effectively reflect web thinking in its translation into the physical world of the printed page), the choice of paper (tactile, suitable for writing in pencil), the font, a certain type of editing and graphics familiar to users of the social networks. Even the paper comes from the Sora paper mill, fed by the waters of the Fibreno, eulogised by Cicero. 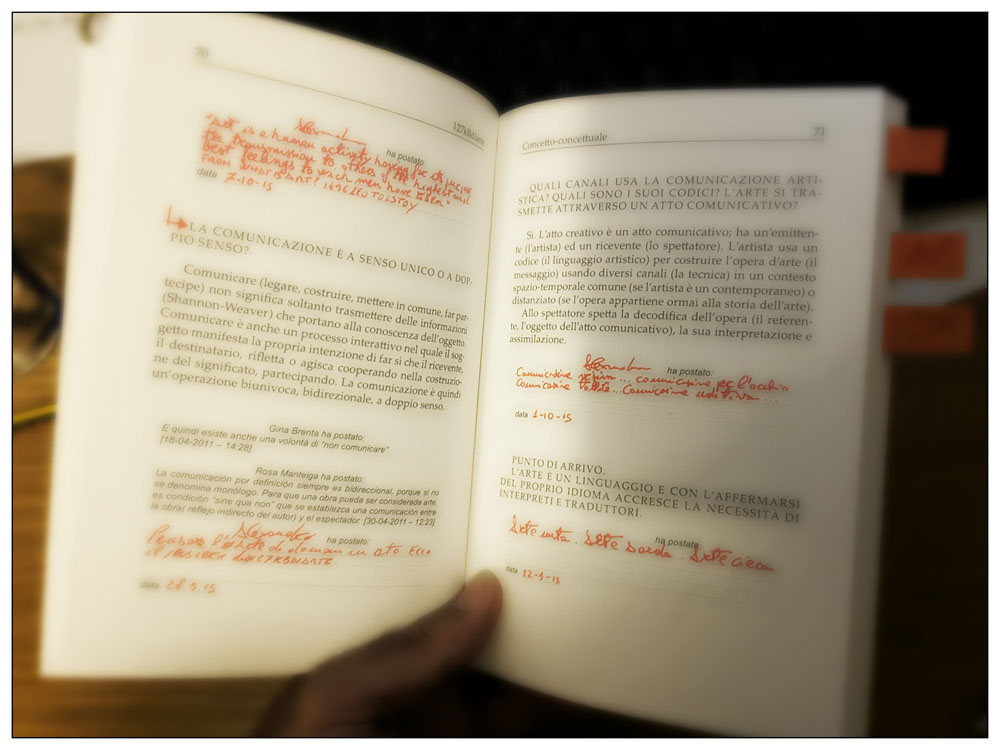 For you, what is the meaning of internet art (a term that covers the network of blogs as well as the analogue network created by the book’s distribution)?

Web-based thinking about art means that ideas and concepts bounce around like balls on a ping pong table, to quote Antonino Saggio in his intervention on Facebook[1], and they change direction, they evolve. In this game, the rules don’t change for each match, but they are changed by the movement of thought: thought which is “in transit”. Tags and reflections on the book, first arising online – on the blog – and subsequently transferred onto paper, have returned to the game in a new network medium and a transverse form, creating mental and thought connections between many readers and co-writers in the various social networks. Metaphorically, the book has become a fetishistic object, taking the form of an artistic operation which is ironically post-pop, viral, which spans periods of history, artistic movements and disciplines, icons both past and contemporary, as in a cadavre exquis or a calembour.

Our solitary work leads us to become increasingly restricted to our lifestyles but also our ways of thinking. We’re interested in innovation, but the need to keep pace with it at any cost forces us to into old-fashioned isolation. As far as I’m concerned, you’ve obliged me to come out of that isolation and reflect. When I re-read my contributions in print, I had no recollection of them. They made me go back and think again. More than anything, they opened up the possibility of responding to myself, of updating my views at a considerable distance from the time I posted them. You made me experience the way in which print too – where the written word certainly remains indelibly permanent and static, can be brought to life and, with the help of graphic devices (such as the ellipsis that refers to the unfinished and invites us to intervene), re-open a discourse which is closed. What unexpected feedback have you received, and how might it develop in the future?

We are already beginning to receive the annotations of readers of the physical book, who in turn have become co-writers and have made their own copy unique. All this material constitutes memory in movement, in layers and flows of the web, an ongoing and ever-changing connective thinking that will lead to new specific weights in Artistic thought!

The book was previewed at the 6th Festival delle Storie as an exemplary account of web-based thought, of the “path” of shared writing which transmits information genetically. Vittorio Macioce, who introduced our presentation, spoke about the Library of Cassino Abbey as an ancient piece of cultural hardware, a crossroads, a network of interconnections. Everything comes from the past – we have just mentioned the Middle Ages, and before that, Cicero – but evolves towards the future, a future that cannot dispense with a shared construct of thought.

The book is already in its second edition, which we didn’t expect, because this material interpretation of web-based thought required the introduction of a new mindset, a new mental format, setting the trend for a kind of collective and connective intelligence. For this reason we were invited to take part in the “Sapienza Design Talks”. Because the sharing economy Jeremy Rifkin talks about can be considered the third industrial revolution…and connective thinking is the new revolution in communication.

A revolution, I would add, that has plenty of room for the printed page, and which re-launches it as the active tool of an innovative forma mentis which moves in several dimensions and which can compete even in the field of technological innovation, and can also (but not only) include the modern oral writing of the blog form.