by Elena Giulia Rossi
in exhibitions

The Philip Feldman Gallery + Project Space at Pacific Northwest College of Art (PNCA) is presenting Breaking Banality: The Dysfunction of Remediation, an exhibit of works by Eva and Franco Mattes AKA 01.org. This «anonymous» duo of artists are renowned on an international scale for their activist work in which they delve into and examine issues regarding the identity and social impact of the media and the art circuit.

Eva and Franco Mattes have raised these arguments, penetrating and wielding the media system thoroughly – from the Internet to the press. They have chosen a distinct, modern use of the performing arts with efforts that are genuinely rebellious.

From the perspective of modular operations that can always be taken apart and put together again within an abundant network of references and cross-references, Eva and Franco Mattes use the title of the exhibition,  Breaking Banality: The Dysfunction of Remediation, as a point of departure for the operations originating from generative software obtained on line. And so the curtain rises on an exhibit that presents ten reiterations of a performance of BEFNOED – By Everyone, For No One, Every Day, for which they had used online crowdsourcing services to commission anonymous users to create webcam performances. The people involved were requested to perform in front of a camera and under direction. The artists provided programmed instructions similar to those used for the Fluxus method, an art movement founded in the 1960s that went against «the system». This method has now taken its rightful place among tradition and today’s market. The videos were later distributed to a wide variety and lesser-known social networks throughout the world. The performances have now become an object of observation while spectators – unbeknownst to them – take on the role of new performers as soon as they start watching the videos and are forced into awkward, almost ridiculous positions. Other objects on exhibit have an image printed on them resulting from an internet search for the words «worn out» commissioned to an online service and delivered to the exhibit without being viewed by curators or artists. 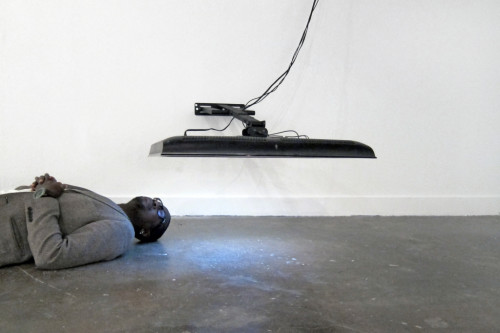 What follows is an exploration that the two artists undertook by getting involved in a project that playfully exposes the mechanisms of the capitalistic world, revealing what goes on backstage in the art world by operating within it. Known around the world by a variety of pseudonyms with which they have used to fit their features, familiar to the public and reproduced during virtual performances, they have identified themselves through different characters. One example is Darko Maver, whose presence had become so real that was invited (after his presumed death) to the Venice Biennale. Another example is the fake Nike campaign (Nike…Ground) in which the artists had announced the intention of the company to change the names all of the main squares in European capital cities into Nike Square.  From the internet to the modern technologies of communication and associative systems, Eva and Franco have been able to dismantle the scaffolding of the media at the service of the powers that be to record its evolution and define it in a different manner time after time – provoking astonishment and disorientation. This has called for the formulation of broad social criticism in order to restore some awareness of the new associative culture of the network and of the systemic structure of the world of art and of its resulting society, subordinates of the media world.

Eva and Franco Mattes, «Breaking Banality: The Disfunction of Remediation» 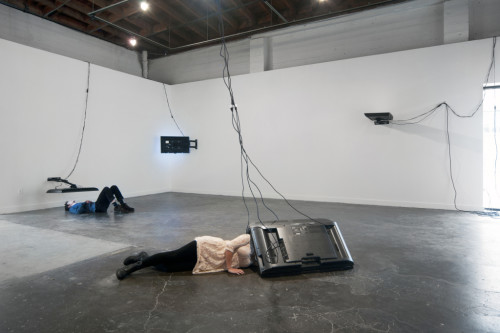