Foods of all kinds and representative of every social and religious class are the subject matter in a majority of artistic iconography: from medieval mosaics to oil paintings on canvas from the Renaissance to today, to the installations and performances of the avant-garde movement of the early 1900s. In 1932 the artists Marinetti and Fillia signed the “Manifesto of Futurist Food”, a biting attack against the tradition of spaghetti, “food that is gulped instead of chewed”, and an entertaining cookbook for futurist lunches that includes dishes “whose original harmony of shape and colors nourishes the eyes and arouses fantasy before tempting the lips” (published in The People’s Gazette of Turin, 28 December 1930). From then food has entered into art in an increasingly pervasive manner: from the eggs of Piero Manzoni, who offers them as food to the public after having signed them with his fingerprints, to the “frozen” foods in the sculptures of Oldenburg, to the gruyère transformed into a piano in the work of Daniel Spoerri, to the transformation of the relationship that connects man to his food in the diaries of Vanessa Beecroft (where she lists the foods she eats daily), and to the spaces used as kitchens in museums the world over by the Argentinian artist Rirkrit Tiravanija. 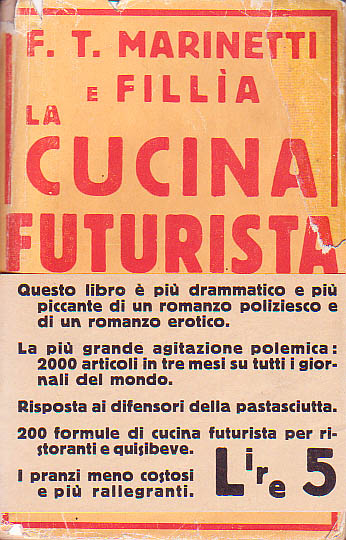 Even when art’s creative instrument and its place of fruition are found on the Internet, as is the case with those forms of artistic expression now roughly defined as net.art, some works continue to be inspired by the theme of food – though far from taste, smell, the touch of the physical world – such that these are increasingly identified with the real world. The popular McDonald’s Video-game (2006) by the Italian collective Molleindustria is a politically incorrect game that denounces the negative impact of the operation of the eponymous fast food chain. To win the game the player must help the corporation succeed at any cost: raze square kilometer upon square kilometer of forest in order to create grazing lands, feed livestock with transgenic substances, fire employees where necessary and undertake efficient advertising campaigns, all while watching out for customers ready to unite in protest against long lines at the registers or demonstrate against food poisoning. Winning the video game equates with causing serious environmental damage. The game, now part of the collective imagination, is an efficient instrument; the user’s participation makes it so that its message in assimilated in an active manner and the game is thus transformed into a political manifesto. The impact of transgenic technology on food has been at the center of numerous debates in recent years. Bio Tech Kitchen, work of the two Austrian artists Josephine Starrs and Leon Cmielwski, takes its cue from precisely this. Where Molleindustria has written a game ex novo, the two Austrians have chosen to manipulate an existing and highly popular one, Marathon Infinity. The original game, where a spaceship must fight violent battles against aliens, is transformed into a witty war against genetically modified foods. Only the structure, the sounds and some graphic elements from Marathon Infinity remain. A kitchen used as a laboratory for transgenic experiments substitutes the futuristic atmosphere of the original version. The modified foods join forces in order to win the day over the food chain. They must be destroyed. Rags and kitchen utensils are the weapons used to fight the enemy. F.R.U.I.T.is an honest to goodness project of online activism, a work of the collective “Free Soil” (Amy Franceschini, Myriel Milicevic, Nis Rømer), which fosters the formation of online communities dedicated to the environment. Its social commitment is very precise: its aim is to encourage the development of arable lands inside urban centers and to increase consumer knowledge about agricultural products. F.R.U.I.T. teaches everything about the lifecycle of every food, from its production to its transportation costs from rural areas to cities, to its use and consumption. Four Short Interactive Pieces about Vegetables and Sounds by the duo “Tree – Axis” uses food as a starting point to reveal the incredible potential of the virtual world: plant life (greenery) which in the real world stimulates taste, touch and smell, can in cyberspace instead stimulate hearing. Through user interaction, celery stalks emit sounds similar to a violin strings’ and tomato release New Age notes from their skins. 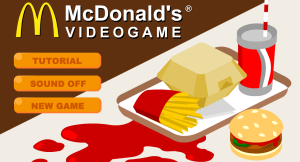 If technology has indeed gotten closer to our lives and our senses, Kelly Dobson ironically and amusingly illustrates this in Blendie (2003-2004). Here the protagonists is a kitchen appliance: the blender. Artist and machine converse in a video performance that examines the relationship between man and technology in humorous tones: through a software program created by the artist, the 1950s blender spins in response to the human voice, which regulates the intensity of its spinning. In its role as interlocutor the blender seems at times to no longer obey human stimulus but rather to reveal a consciousness of its own. The result of a long research process in design, engineering and psychotherapy, Blendie is part of the larger project “The Machine Therapy”: the construction of empathic machines, such as Blendie, opens a reflection on the social phenomenon of diffusion of technology in the post-industrial era.

These are mere samplings of the numerous and varied productions where food is used in the description of post-computing landscapes: people raised with transgenic foods, such as those decried by Bio-tech Kitchen; unaware of damages caused by large corporations of which they are the primary funder, as shown by McDonald’s Video-game; consumed by new technologies, including kitchen appliances such as the blender in Blendie; incapable of using their senses, made lazy by the tastelessness of genetically modified foods. The virtual world, into which we are slowly being transported, offers new possibilities, and Four Short Interactive Pieces about Vegetables and Sounds illustrates one of them: if it is no longer possible to enjoy the true flavor of the fruit and vegetables of the world, then through the Internet we can at least listen to them.