After all, art is life and art, as life, is what happens while you are typing.

Storage Un.it, a small project space attached to the Arebyte Gallery in London and dedicated to online projects, is hosting the work of Italian artist Guido Segni, now known – among the numerous pseudonyms he has used in his artistic journey – as Guido Segni.

The Artist is Typing is the project’s title and its content. To access the website is to enter directly in contact with the artist, whose presence is discerned through his writing as it scrolls across the screen in real time. The intimate act of writing becomes public as it appears. Segni allows us into his mental space as he writes artist statements, press releases, unpublished poetry, ordinary and private emails; activities that cover the various different moments in everyday life. The keyboard becomes a depository of life. Here private and public occupy the same territory and are then inputted into digital paths.

“Our presence intersects with that of the artist, and – as he stated in an interview with arshake – his performative act of writing does not lie so much in the uniqueness of the hic et nunc, as was the case, for instance, with the performances of the 70s, but rather in being part of a mechanism which does not exhaust itself either with the end product or with the medium employed (website, video), but which inserts itself into time and triggers reactions of various kinds.” (Guido Segni, Arshake, 22 dicembre 2015) 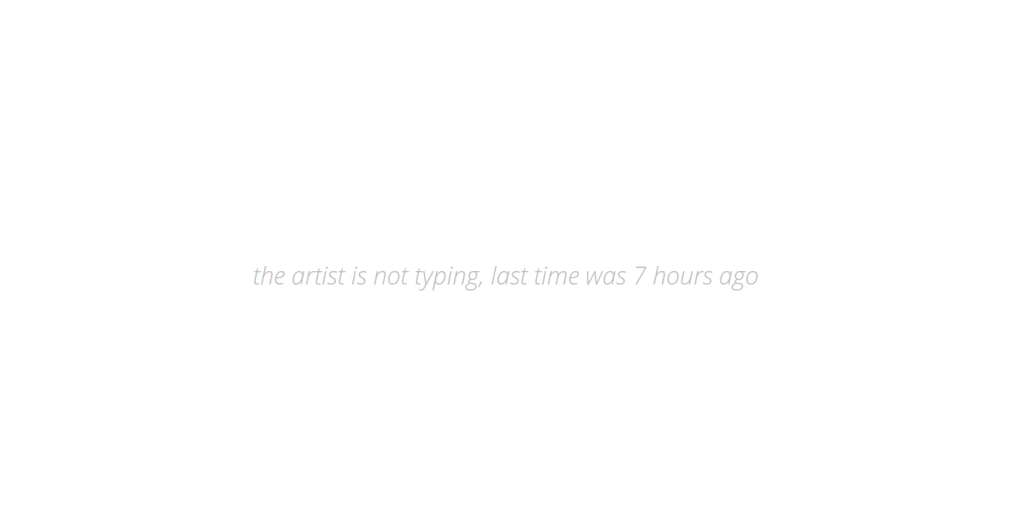 The space of the action is between him and us, between the physical space of writing and the virtual space of the internet. The distance that technology appears to interpose between us and the world lessens because now it is part of our lives. Writing (emails, text messages. etc.) not only manifests this difference, but makes it concrete.

The presence of the artist, which in Marina Abramovic’s now classic performance The Artist is Present (2012) – referenced by the title – was dictated by the energetic intensity of her thought, transmitted solely through visual (and physical) contact, in Segni’s project evaporates in the virtual dimension and places itself between his physical presence and our own through the medium of writing, which takes shape on the screen like a different – but equally real – intensity of presence and physicality.

project space located in a storage unit at the Arebyte Gallery in London.

images (all) Guido Segni, The Artist is Typing, screen shot from the live performance online

Beyond/Limit. Wunderkammern and at the Outdoor Festival