by Valeria Coratella
in focus, Interview

Leonardo Zaccone Spazio Chirale’s co-founder, research center for digital creativity, talks about the sound performance “Customer Care” realised with his collective MetaDiaPason, in collaboration with Ipologica. The event, that was held in the physical space and online on March 20, from 10 until 6p.m,  registered more than 3000 accesses, 500 interactions in chat from visitors that joined the performers from their homes. «Customer Care» stems from a research on everyday actions, referring to a working day. 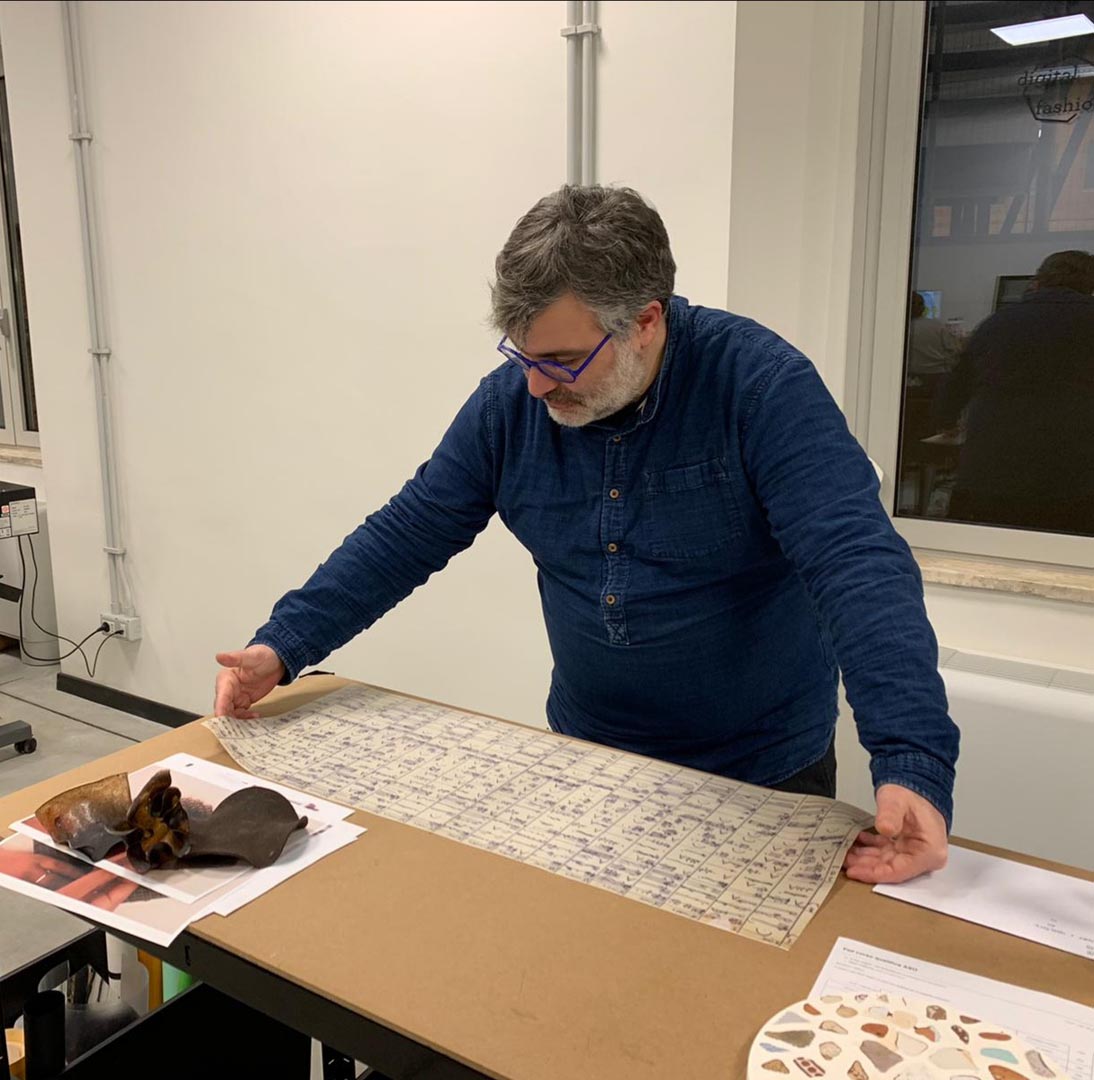 Valeria Coratella: On March 20 you staged the performance  “Customer Care” at Spazio Chirale and online. Tell us how it went.

Leonardo Zaccone: I have very mixed feelings about telling you how it went. Although I planned how this performance would go, encouraging performers and audience to remain distant while constantly interacting, in the end I was myself a victim of the process I had imagined.

On the evening of the performance, in fact, at the end of the eight hours, I felt almost empty and disappointed because there was a complete lack of contact with those who had listened to us. The gaze, eyes, applause and criticism – their absence made it seem almost pointless to have spent the whole day performing.

In contrast, the performance was very successful. On our site we had over 3,000 unique visits from all over the world during the eight-hour performance and received almost 500 interactions via the site’s virtual assistant.

In this sense my disappointment at the time meant the performance had worked, showing the alienating power of the customer care system, which was something we wanted to covey. 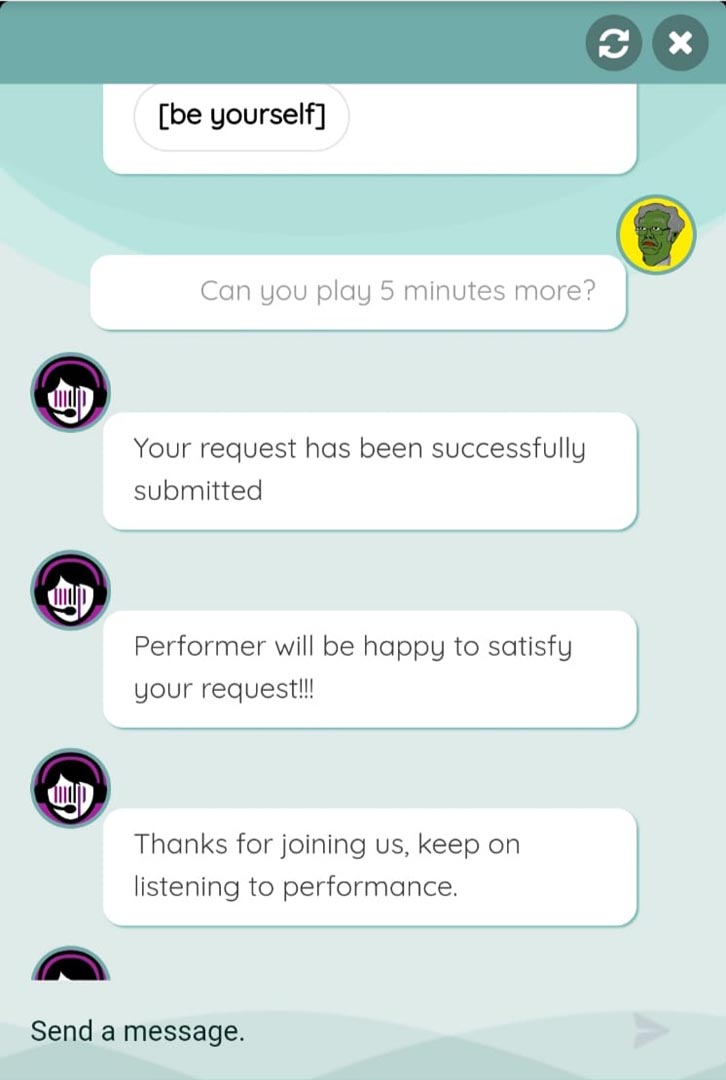 During the performance, the audience could interact in person through a virtual assistant, a chatbot.

Yes, P.I.C.O. – Performance Interactive Control Operator – a virtual chatbot which I designed and programmed, based on an AI engine and which, to a certain extent, represents the score, the Customer Care soundtrack. The aim was for the public to interact with an “instrument” they now frequently use, reproducing a liturgy of everyday life in artistic form. Performers and audiences subjected to corporate mechanisms.

Have you considered that the performance might have been sabotaged by this interaction?

Actually, that’s a very interesting question. In general, the public always interacts with art. It would be like asking whether we’ve considered that the public might bump into a statue in a museum and damage it. Clearly this is something that people can always do, but it’s not something we expect.

Rather, in interactive art and performance in general, the audience is a key variable because the relationship generated is central to the work – how the audience responds, how it reacts, what it does and how it might do it. I’ve been involved in interactive performance for over twenty years now and the audience has always represented the core of my research; how to design, draw, I would even say compose, as my research is particularly focused on sound; how to create an event by imagining all the possible interactions that could be generated by the audience.

Lately, with the spread of interactive online performance practices, a lot of attention has been paid to this issue of sabotage. I think about some historical performances, such as Cut Piece by Yoko Ono where she hands a pair of scissors to the audience so that they can cut off the dress she’s wearing, or the famous performance Memorabilia by Marina Abramovic and Ulay, in which the two naked artists stand in front of each other, at a crossroads, forcing the audience to pass between them. In these cases, we could’ve even been afraid of an extremely violent, dangerous reaction. Nevertheless the extreme reaction, the risk for it to emerge, is a very precise component that belongs to the performance.

And there have been a lot of extreme reactions from people who harassed or even hurt the artists, or who blocked what would have been the normal flow of the performance.

What I mean is that, when it comes to performances involving the public, there is no concept of sabotage. Everything that’s possible within the process put in place by the artists is not only always acceptable, but is part of the work itself. The artists’ task is to train themselves and be ready, imagining how to respond in the various situations that may arise. Or to make sure that, when outlining the rules, such situations don’t arise. Then if someone goes against the rules, it’s the same scenario as a tourist who damages the Trevi Fountain.

In this sense, what’s viewed by some as sabotage is instead a tangible sign that the performance has worked by eliciting even complex reactions from the audience. It’s our collective’s motto: “Art is undisciplined”. 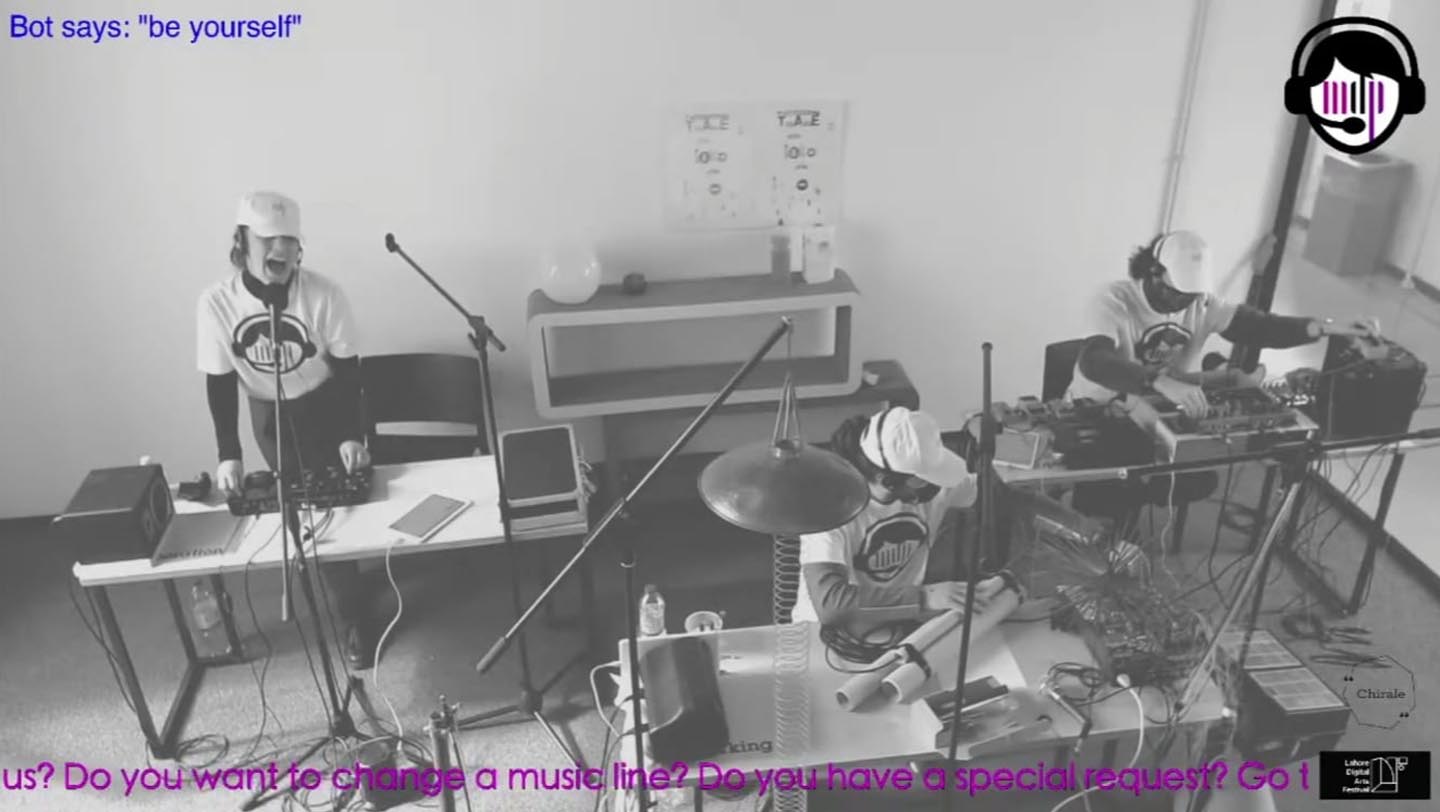 And in the specific case of Customer Care?

In our case the interaction was mediated by P.I.C.O., which didn’t allow the audience to directly enter the performance flow, but I had prepared for the possibility of sending special messages and responding independently, accepting them, but also reacting unfavourably to requests that may have come our way. The important thing was not to ignore them. So we came up with a whole series of extreme requests. For example, during the rehearsal stage we asked ourselves: what would we do if someone asked us to undress? Each of the 11 performers responded in a different way. Each response was acceptable. One would have taken their clothes off; another said they would “strip themselves” of their instrument; someone else would have responded by making a clear gesture of refusal towards the camera.

So, towards the end, we got a special request to make the performance last another five minutes. The request was presented to the three artists who were performing at the time. Two decided to “sound” the disassembly phase, agreeing in some way; the third performer made a clear gesture of refusal towards the camera. Her reaction made me think: for her the request to work five minutes longer was like taking her clothes off. 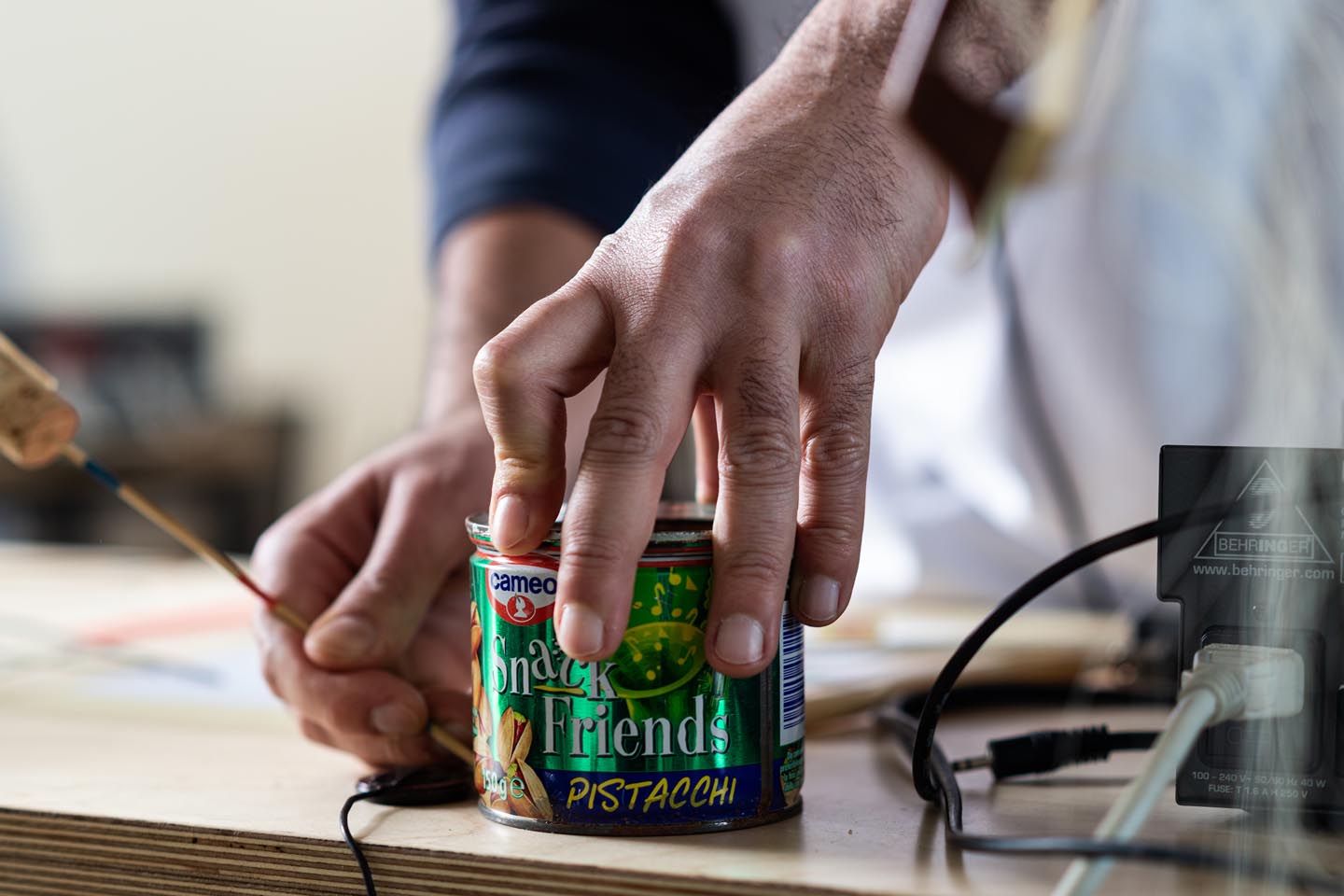 One of the chatbot options was “work with us”. Did you use software to select those who could perform after applying on the chat? What criteria did you use?

Thinking about the mechanisms of customer care, we reflected on the contemporary centrality of smart working, so we wanted to include this process in the performance.

The virtual assistant was just there to allow people to apply to play with us, but I was the one who contacted them to see how they could fit in. We did this so that applying would require a little extra attention and time.

The process worked. Alongside three members of our collective who live abroad and had agreed to this beforehand, we had another eight people joining us for the performance. And not all musicians. As P.I.C.O. said, “Everything can play. Everybody can play.” A philosopher of music wanted to play some paper, to the point of burning it and “sounding” fire. An environmentalist wanted to play music using tea cups at 5pm sharp. It represents his pandemic ritual and he wanted to share it with us.

The performance generated a long piece of music resulting from a multiplayer artistic performance. Will there be an online link to the performance so that it can be enjoyed later? Have you thought about possible downloads by the public?

Clearly, like any performance, it has to be experienced. You can currently watch the recording on the dedicated page, where we have also kept the chatbot active, to offer a “mausoleum” of this experience but, unfortunately, without real-time interaction. We are also thinking about documenting the highlights from the eight hours. 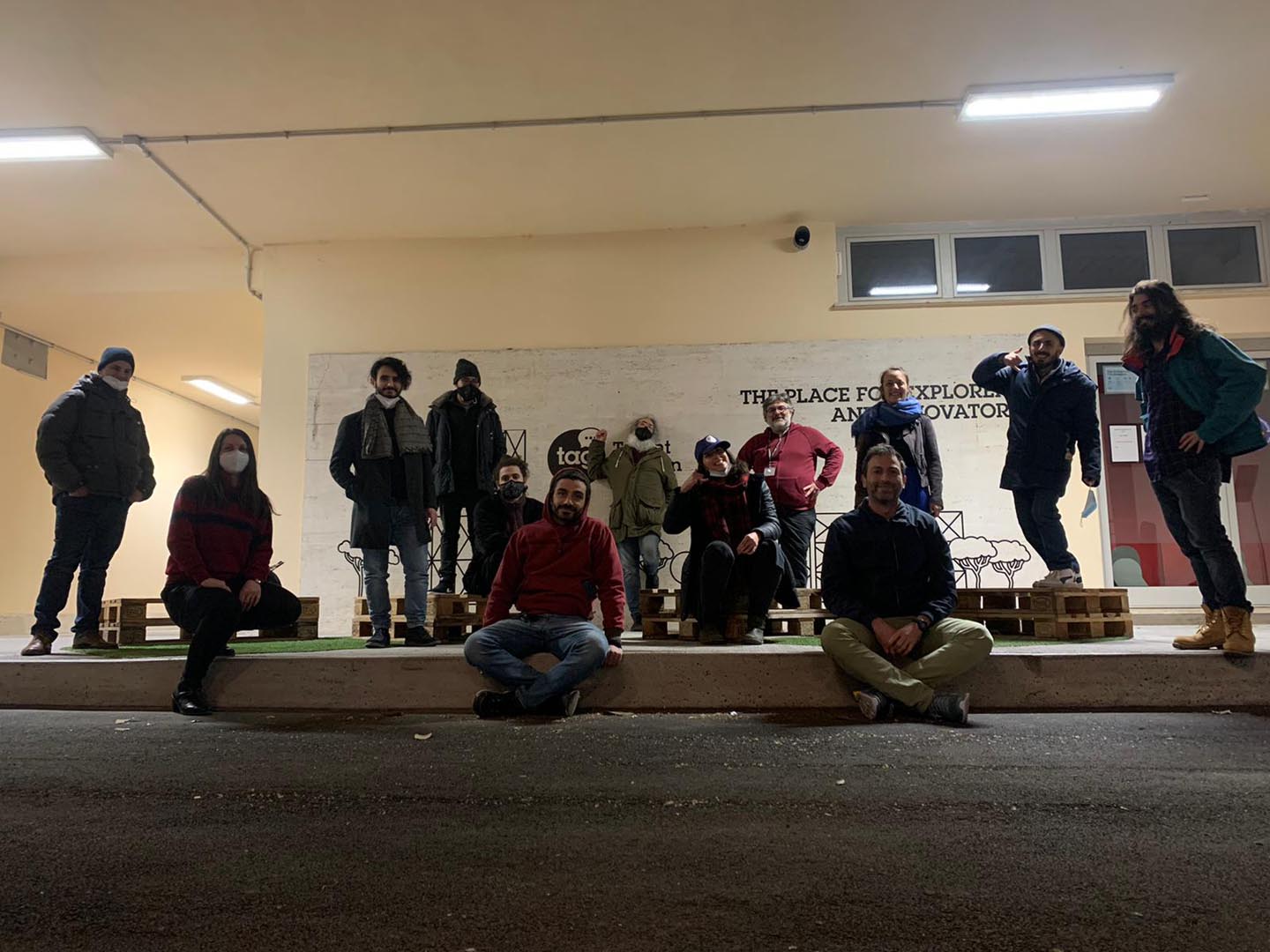 Considering the “open work” form that underpins the philosophy of MetaDiaPason and the Open Source culture of Spazio Chirale, which you unite, can your collective project be compared to the copyleft model on copyright, like Luther Blissett’s project which everyone can draw on and make their own?

I think so. The “open work” concept which Umberto Eco describes in depth is, above all, based on the principle of indetermination. For me it’s essential that no one knows exactly what might happen. It’s the most authentic way to relate art to life. There’s no route, only the act of walking.

However, it’s also important that open work minimises, if not completely eliminates, the role of the author. I trace a path, which is the performance. But I’m not the author and, therefore, the owner of the music. In order to create Customer Care, we involved many artists alongside MetaDiaPason, such as Ipologica, who make their own music, which is different from ours, but who have been happy to participate in our performances for the last two years.

I think we give too much attention to the supposed value of ideas. Ideas belong to everyone. Art is process; art is nothing more than what happens and, as a result, it belongs to those who create it, materially, in the moment in which it is created.

To paraphrase Bach, who was happy when he knew that some choirmaster used his music for mass, I’d be very happy if someone else wanted to perform.