by Dobrila Denegri
in focus, Interview

Artist and researcher Victoria Vesna talks about her latest work in conversation with Dobrila Denegri. In an interview published on Arhsake in 2014 in four parts, Vesna has crossed her research, from database aesthetics to molecular biology, exploring the relationship between man and the universe at any scale (Arshake,April the 3d, 2014, April the 10h 2014, April 24, 2014). Today, artist and critic continue their conversation to discuss her latest work: [Alien] Stardust, a research project on star dust that, invisible, falls on Earth from the sky. 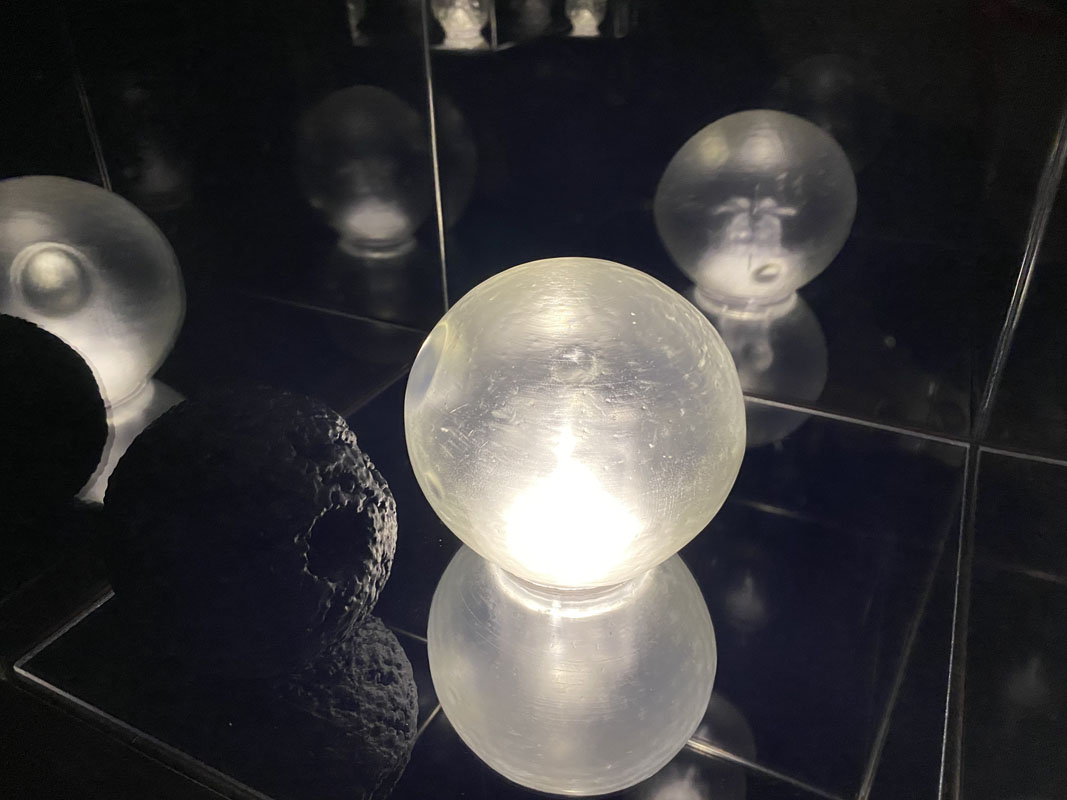 DD: “Every creature contains hydrogen atoms and every material element is manufactured in stars through their fusion. We are created from stardust by nuclear fusion, like our myriad siblings – animals, plants, insects, plankton, bacteria and viruses, and we all function together in vibratory fields – bottom up just as nature and nanotechnology works.” This description of your latest project – [Alien] Star Dust – states that we are all created by stardust. What this means exactly and what is the scope of the research that you are pursuing through this work?

VV: There is this idea that everything in life is made of a combination of different elements and we are no different. From the big bang — the hydrogen, helium, phosphorus, carbon and oxygen all come from an explosive massive star. I started to do a research to learn more about this, focusing in particular on the micro-meteorites which can be found on Earth. Looking at these dust particles, is a path to understanding how life started on our planet and how all is interconnected. Without carbon, there is no life — it is the main component of everything – DNA, muscle tissue, everything in our body actually. This reminded me of a song by Joni Mitchell from 1969 that goes: We are Star Dust… Billion Year Old Carbon (…) And we’ve got to get ourselves… Back to the Garden… These lines became the theme of the Woodstock in 1969 – same year humans landed on the moon, the first Internet (ARPANET) connection was made, the summer of Love and cultural explosions, and of massive protests against the war in Vietnam. The following year, 1970, Earth Day was established and environmental consciousness started to emerge. All this became very metaphoric to me.

Looking deeper into this I was fascinated by the fact that every day hundreds of tons of stardust falls on Earth, and that we are totally unaware of that. Interesting also is the fact that it was a Norwegian jazz musician, Jon Larsen, who made the public aware of these wondrous micrometeorites. Approximately a decade ago, he asked himself why scientists only go searching for these cosmic dusts in remote places. If they fall over the earth, could not we find some on roofs of buildings? To date he has collected and imaged thousands of micrometeorites and received recognition of the scientists. In fact, we can find stardust everywhere around us. Mixed with all other dusts and pollution, there are also micro-particles coming from outside of our solar system. I entitled the piece Alien Star Dust as I wanted to also question and shift the notion of “alien”, especially now when borders have been re-established again everywhere. Who or what is alien to us? What do we think of when seeing foreign dust? 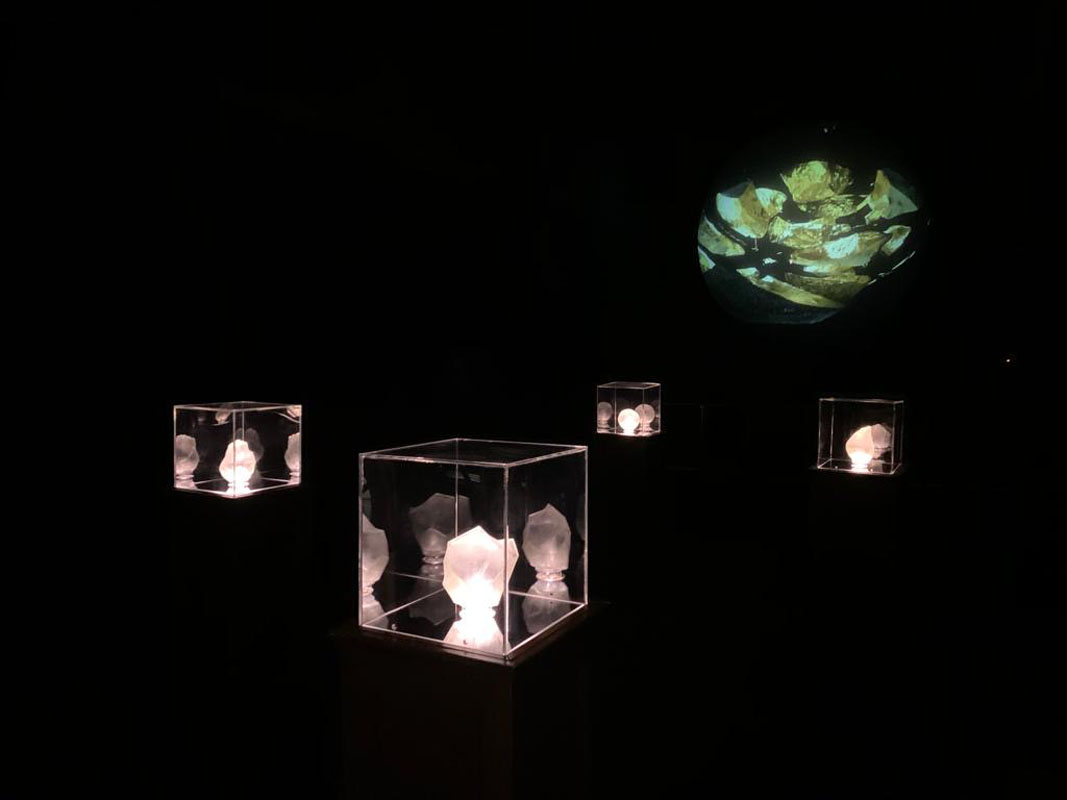 The show in the Natural History Museum in Vienna opened just a day before the lockdown in Austria on March 10th. In the moment in which walls, barriers and borders were built again, you are talking about matter that knows no borders and spreads everywhere… How does this new condition, which very quickly became global, shapes interpretation of your work?

Occasionally it almost scared me to think how I sensed all this… But just to backtrack a little bit, I would like to say that the project was initiated upon the invitation by Christian Koeberl, geologist and director of the Natural History Museum in Vienna. He challenged me to propose and create a work with their collection of meteorites. We started talking three years ago, and back then I didn’t know exactly what I could do, but I was surely fascinated by the museum’s collection of meteorites, which is one of the largest in the world. These stones are no doubt beautiful and fascinating, but somehow lose their meaning out of context, so it took me some time to come up with the idea. Finally, I asked Dr. Koeberl and the meteorite curator, Ludovic Ferrièr to pick seven meteorites, one from each continent with an interesting story. So, we have one from Africa that crashed in Tissint (Morocco), from Europe meteorite — a recent one (2013) that landed quite spectacularly in Chelabynsk (Russia), from Asia — Fukang (China), one from Henbury (Australia), Canyon Diablo (North America), Campo del Cielo (Argentina) from South America and one found at the Alan Hills at Antartica. So I got this great opportunity to work on this incredible stones, which the curator, Mr. Ferrièr, explained to me much more about them and even allowed me to photograph them close uo. Well, all this made me think that I have to animate meteorites as well, because only through them we can get out of our Earth-centric perspective and start to think about Universe. 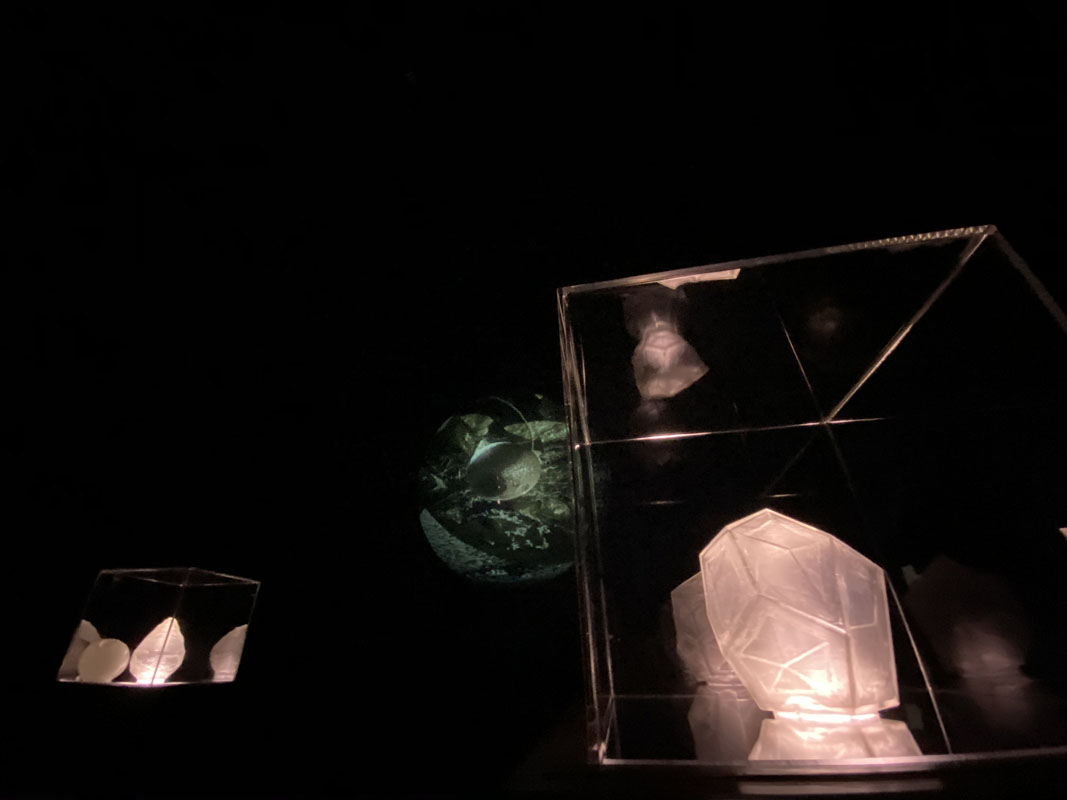 But to come back to your question about borders: I wanted to make a point that dust knows no borders. At first, I started to collect dust, searching for meteorites and comparing the pollution from different areas. I also had a short residency at the Ecole Polytechnique in Paris at the SIRTA observatory where I learned so much more about dust (pollution). Learning about how ‘foriegn’ dust is followed and researched in relation to climate change became super interesting of course, because it gave me an overview on how pollution travels.

Since my work is generally site-specific, while installing the piece, I was given the opportunity to go to the roof to the museum with Dr. Ludovic to collect the dust there. Then we went to the museum’s microscopy lab and what we saw was incredible – we found Saharan dust along with micro-plastics, micro-treads and all various particles of pollution. This dust is now part of the installation, under a microscope for the public to take a look and make a connection with the animations in the installation. On the roof to the museum there is also an antenna that acts as a receiver of radio signals reflected from plasma trails of meteors from space and I worked with my collaborators on creating layers of of sounds mixing audio from space with human made noise and melodies of various cultures.

Already in January, I was more than aware of what is going on in China with corona virus as I have family and friends there. What I realized while doing this research is that it’s more than possible that dust carries respiratory diseases – at least some scientists are working on this hypothesis. Reading about theories of several scientists researching if diseases like MERS, SARS and similar could travel through dust was very interesting to me. It is certain now that virus travels through aerosol, so it is not so impossible that it can be carried also with dust. I envisioned in my mind that it could be possible, and at that point whole this idea of quarantine appeared to me as quite primitive. Of course quarantine helps, but not in the long run. It is possible that we will have a second wave of the pandemic, then a break, then a third, and so on. Until we finally realize that we are on this planet together and part of a complex ecology and that we have to work as planetary citizens, we are not going to solve any of these problems. This brings me back to 1969 when we actually saw ourselves outside the planet for the first time. As Buckminister Fuller said “we are passengers on Spaceship Earth without a manual.” I just love what he said, ‘because it is true: we are just crashing and burning, just not knowing what we are doing basically [laughs]. 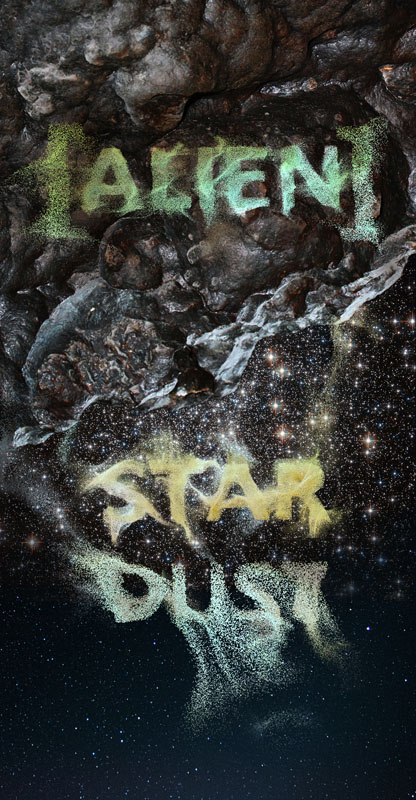 During the lockdown, the sense of urgency and need to cope with contingencies and criticality’s of present and of close future, triggered great amount of conversations, discussions, brainstorming sessions in various portions of art community… you also kept open the space for discussion and did lot of interviews and conversations about artist’s role and response to this situation… what is the pulse that you sensed among art&science community in which you operate?

Art and Science community can play a major role in the present moment, I believe. In particular artists who engage with science and actual facts, not only those who lean on science aesthetics. Certainly market-driven art scene will be transformed. We, artists who are part of Art and Science community, have been on fringes of this system because our works don’t quite fit-in to the market. Besides, market-driven art scene was for me always a bit problematic because it mostly serves the 1% and the emphasis is on the object, a unique object. For media-artists who mostly use technologies and produce work which is immaterial, multiple, changeable, this system was inadequate. Over the years though, Art and Science community became quite strong, a lot of us have a base in academia which allowed us to experiment, to research, collaborate with other disciplines and to develop in very advanced ways, bypassing commercial aspects and constrains. I feel hopeful actually, in a sense that a new approach will emerge, towards market and towards the art production. I want to believe that it will be more egalitarian. But the question now is how it will emerge and that is what I wanted to explore through interviews and talks with my colleagues and peers. It is important that all this crisis doesn’t end up in another jungle, where the law of the stronger rules. My goal is to show, highlight, promote the work of artists, designers, architects, scientists, and generally practitioners who I respect and interact with anyway. What we know now for certain is that everything around us is completely uncertain. So it is not a time to be idle, to sit down, because there is too many people who are thinking of how to go back to the previous “normal” and create more walls, more borders… and we will lose a chance to make some kind of resolution to all of this. I am hopeless optimist, so I envision that a new way of thinking will emerge, a new way of relating. In a way we are already on that track, since most of us isolated but globally connected — zooming all day, so something has to happen! I just feel strongly that now is not the time to be idle.