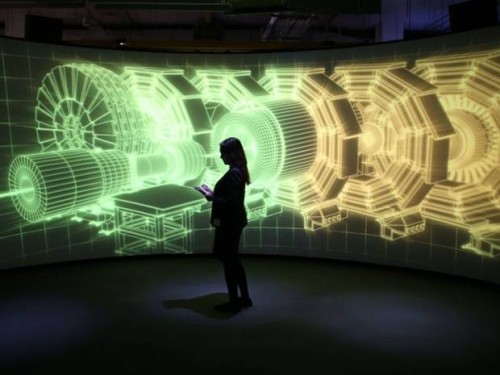 London’s Science Museum is «staging» the world’s greatest experiment: LHC – the Large Handron Collider – created by the European Organization for Nuclear Research (CERN), the European laboratory that extends deep under the border between Switzerland and France.

The Large Handron Collider is an enormous structure that lies in a tunnel 27 kilometres in circumference designed to blast protons at an accelerated speed (close to that of light) before provoking a collision duplicating conditions at the time of the birth of our universe. Translated: we are going back in time about 13.7 billion years to the point in time of the Big Bang when time, space and matter came into being by way of an explosion of unfathomable proportions. Particles were formed after the initial explosion, known today as Higgs bosons (named for the scientist who discovered them), which gave mass to fundamental elementary particles.  This theory explains the way the universe was organized immediately after the explosion, when the boson broke initial symmetries and caused the ensuing evolution into the complex and diversified structure we recognize today as its current status.

The existence of this particle was suggested in 1964. Announced on 4 July 2012, it was officially confirmed on 6 March 2013 when the incredible facilities of acceleration of the LHD made the visualization of its presence possible. A camera was specifically designed to capture the moment of collision, making it possible to see the particles produced by this energy impact (which would have otherwise remained invisible to the naked eye). Notes, drawings on blackboards, videos, radio announcements all illustrate the experiment and its meaning in order for us to better comprehend our universe. The scientific and educational slant of this exhibition includes the reproduction of the laboratory itself, a look at what goes on there every day and a glance at the human side of the scientists and researchers who spend most of their days 100 meters below the ground. Above all, the reduced scale of the experiment makes it completely visible and understandable to visitors.

A scientific exhibition and a careful consideration that touches upon all disciplines in an uninterrupted revelation of the correspondence between the structure of the microcosm and that of the macrocosm with the identification of the same systematic organization found in both virtual and artificial circumstances. This exhibition translates into intelligible words what science tells us in mathematical terms.