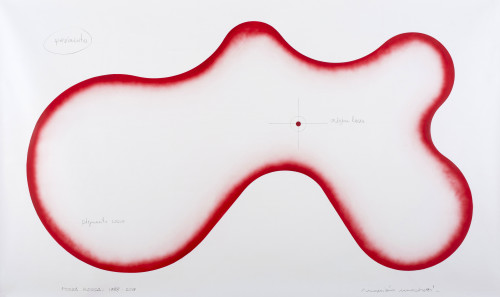 The ‘spatial designs’ of Maurizio Mochetti are now hosted in the beautiful setting of Palazzo Sforza Cesarini, one of Rome’s historic locations and home to the Giacomo Guidi Contemporary Art Gallery in Rome.

Mochetti is an artist renowned for his disregard for trends and for his visual language that he expresses using the logic of quantum physics and mechanics while contributing to his research on space in its infinite dimension. Before technology offered itself to his work as a sophisticated instrument that could approach an idea and make it visible, Mochetti intervened directly on photons in order to model light just as a sculptor does with marble. 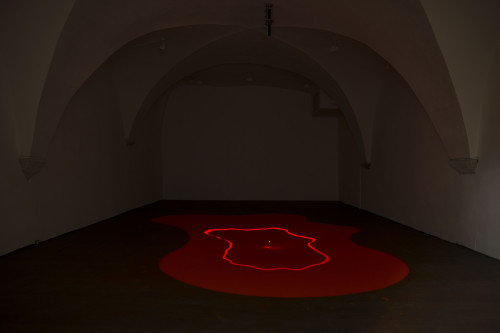 The laser then gave him further potential for visualising invisible space, far beyond what normal light could offer. “The laser allowed me to create works with no dimension, so works that were ever closer to the idea (…)” explains the artist.The laser is the main feature of Pozza Rossa , presented at the Venice Biennale in 1988 and today, for the first time, reinstalled in the setting of the Roman gallery. It consists of a space obtained from a shape dug into the floor and filled with red pigment. A red laser, controlled by an impulse sensor, retracts at the centre to then gradually expand along the irregular, curved perimeter. His Pendoli Laser (Laser Pendulums – 1996-2013) materialise spatial designs in the external courtyard in dialogue with the vanishing point of the Palazzo portico.

Among the works exhibited is an unseen piece from the ‘Missioni (Missions)’ series, created for the gallery, which depicts the trajectory of a V1, a ‘flying bomb’. The space is traced with this movement made visible by a steel wire in tension. Aeroplanes – like racing cars and other objects of the kind – have always captured the artist’s attention thanks to their dynamic, mould-breaking nature.

His works evolve and new technologies are chosen as his favoured tool when they are deemed capable of making space visible. Perceived as a natural instrument of the modern age, they serve purely as a means to draw as close as possible to an idea and to what this represents for the progress, this too infinite, of knowledge. In all of this, the process, the act of creation and the perceptive relationship of the person experiencing the space are the elements that give the work a meaning. Nowadays, the importance of the process in artistic creation is a topic that has long since been accepted. This was not the case in 1968, at Mochetti’s solo show at the Roman Gallery La Salita, where he presented six designs and just two pieces, an entirely revolutionary gesture. Let us keep this in mind as we admire the to-scale preparatory sketches for Pozza Rossa, displayed on one of the gallery walls.