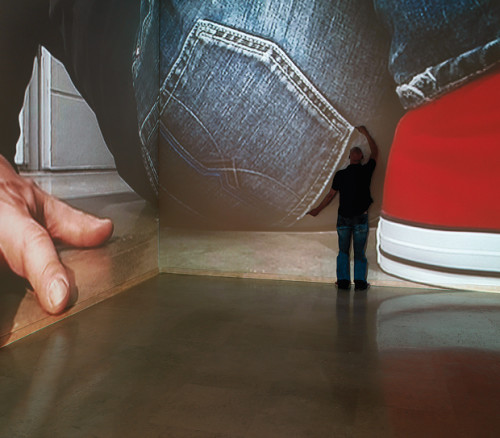 Daniele Puppi combines different artistic genres together to create his Fatiche video-installations which have perceptively revolutionized the halls of galleries, museums, art fairs and alternative spaces. Using his predilection for cinema combined with a skilful use of the installation idioms and particular attention to sound as his starting points, Puppi manipulates creative means of expression to uproot them from conventions and integrate them into space so they can acquire their own physicality – accomplices of an «amplification of perception», as Stella Santacaterina described them in an essay. 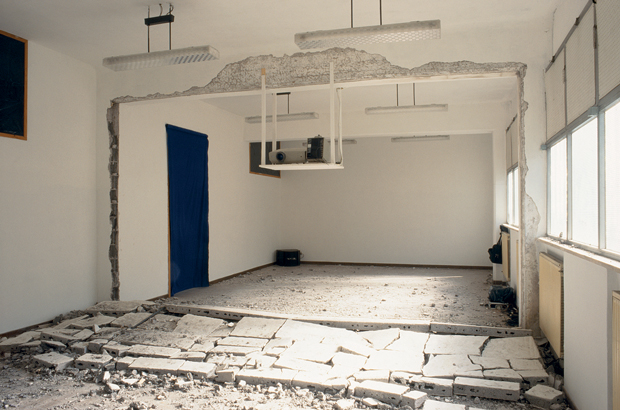 As soon as he graduated from Rome’s Fine Arts Academy in 1996, Puppi created the first of his Fatiche. This marked the beginning of an ongoing research dedicated to space and spatiality by defining them through the body, its physicality and in its echo through image and the sensorial abilities that leave the body only to return enriched by new information. There is also the physical experience  of those living in this space, disoriented by the disproportion of the images, by an amplified sound and by an architecture which changes its features.

At the time of Fatica n.1, the dividing wall of Rome’s Teatro degli Artisti (Gruppo Filtro) was to be demolished. Puppi destroyed it and used the editing of images and sounds derived from the filming his demolition as a structural element to create a variety of viewpoints.

From this moment on, his Fatiche come in and disrupt many different types of environments: the deconsecrated church of Santa Rita and the Magazzino Gallery in Rome (Fatica n.4, 1997), the Massimo De Carlo Gallery in Milan, the Lisson and Sprovieri Galleries in London along with museums such as Rome’s MAXXI Modern Art Gallery and Milan’s monumental Hangar Bicocca, an official museum that – architecturally speaking – has remained faithful to its original features as they were dictated by the original industrial destination. Sound, architecture and image become the new spatial-temporal coordinates needed (but also instinctive) to «understand» space and to «listen to» it with every resource our senses enable to.

The monumental nature on both the visual and sound levels calls the attention of those entering with inescapable strength. They are captured much in the way a siren would lure them and lead to the point in which these guests would feel disoriented and are forced to activate all of their perceptive faculties. Even the temporal dislocation becomes a spatial reference point.

The experienced space, the one filmed while the artist defines it with physical motion (and through details of the body in motion) overlap with the present of the same space when experienced by those entering it. The result is the creation of a new, paradoxical balance found in the relationship established between the physicality of the present experience – the one kept in the memory of the images – and the time that flows between these two moments.

If the Fatiche amplify and extend space in his most recent series of re-animated cinema begun with What Goes Around Comes Around in 2011 for Art Miami, it is the space of the film on screen and the cinematic icons which exceed the screen. The images take on a completely analogical tri-dimensional aspect that betray the «traditional» perception of time and approach us in our real lives.

Puppi’s versatility and the curiosity that drives him to experiment with creative space and idioms have found fertile terrain in Chiara Passa’s Widget Art Gallery. This gallery is also a virtual work built «with» and «in» the informatic language of applications (widget) and can easily be accessed via mobile devises (iPhone, iPad) we well as computers’ desktops. A fly, represented in scale,  is trapped inside the screen where it moves nervously beating against liquid walls. Yet again, sound captures our attention and forces us to concentrate on the fly which would otherwise be practically invisible. In this case as well, we are taken by surprise when the insect releases a resounding noise when it hits up against the front wall. The wall opens at this point and gives us a fleeting glimpse of the vanishing point as we have a moment to imagine all the possible [spatial] continuations.