Quartiere Intelligente (Q.I.) is a wide-ranging project for the redevelopment and re-use of the space adjacent to the monumental staircase in Naples’ Montesanto neighbourhood; a new organism which is activating a process of regeneration of the area’s civic and cultural fabric. The Montesanto hub for research and training is an ever-active laboratory, a beating heart powered by cross-sectional interaction, where art is often the connecting element between technological innovation, sustainable development, study and the valorisation of the district. 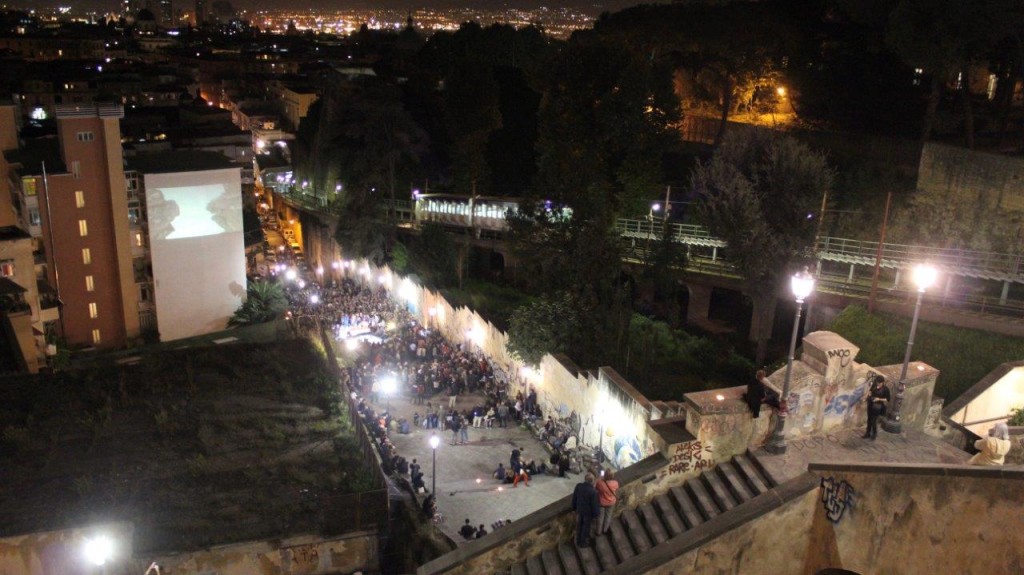 From the starting point of its polyvalent nature, by adopting the global language of the mainstream the laboratory becomes a spotlight and a mirror to the contemporary through Q.I. Vedo, an art project curated by Adriana Rispoli, which presents a series of video installations by Italian and international artists, projected onto the wall of the building flanking the staircase that both crosses and defines the city neighbourhoods. The videos – whose themes are the relationships between humans and nature, local and global, real and universal – become luminous messages which reach even an unwitting audience, aiming to transform the urban landscape through a renewal of critical awareness and a more conscious relationship between citizen and city. 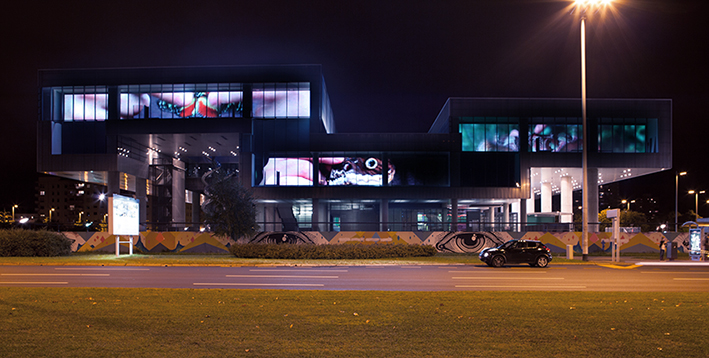 This year, Q.I.Vedo has also lighted up Zagreb, specifically the Museum of Contemporary Art (MSU Zagreb, Croatia), a building of recent construction in the functionalist style, designed by architect Igor Franic. The museum has a total area of 14,500 square meters, and the northern facade, overlooking the municipal park and Bundek Lake, is a 400 sq.m. (100 m. long) multimedia wall. “These are 3 enormous screens which have led some artists to re-think the conventional time-space coordinates of their work, giving new and interesting results”, the curator comments. 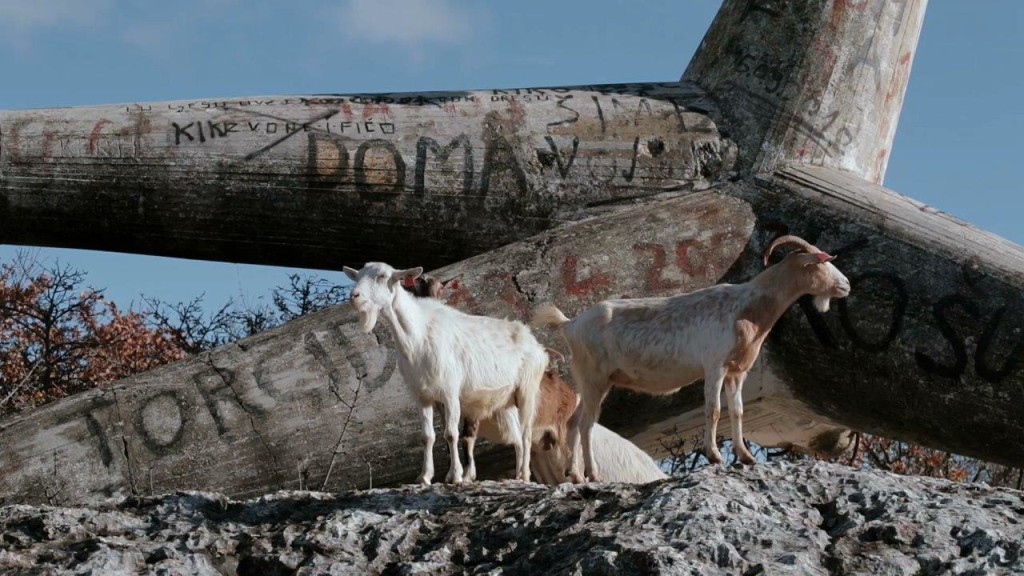 The looped moving images attracted the gaze of passers-by, presenting an unusual viewpoint of the museum, which rather than receiving and bringing together, expanded, using the installation’s centrifugal force, to involve the human and urban landscape.

The intermittent visions have addressed examples of the complex relationship between the natural and the artificial, as in the work of Moio&Sivelli, Like a seagull (2014), a flight over the ports of the Mediterranean, borderlands and places of exchange, showing the symbols of the contradictory nature of the Mare Nostrum. This is also referenced by Raffaela Mariniello in Between (2006-2016), where portraits and architecture suggest a suspended time, undefinable and impossible to grasp, similar to that of Bianco-Valente‘s video Uneuclidean Pattern (2003), in which “Artificial and natural, micro and macro, real and virtual are faces of the same coin”. Filippo Berta reflects on the state of nature and the relationship between the innate impulses of egotism and the strong instinct for self-preservation that govern humans, and with the philosophy of Thomas Hobbes as a starting point, he presents an image of contemporary existence. In Homo Homini Lupus (2011), the Italian tricolor, symbol of both identity and power, is destroyed by the blind fury of three wolves in an allegory of irrational and violent humankind. The praying mantis of Masbedo‘s Todestribe (2014), Luca Trevisani‘s snakes (Physical examination, 2014) and the chimpanzee in Circling Time (2016) by Diego Cibelli and Lilli Messina remind us of the indissoluble link between man and nature, an osmotic and often unconscious exchange, as revealed by Giovanni Giaretta‘s video Senza Titolo – Studio per un ritratto (2012), which portrays silent dialogues with creation, intense evocations which inspire human action and without which life is impossible. Nature is, in fact, Urformen such as claims Luana Wojaczek Perilli (Urformen, 2014), the archetype par excellence, a measure of time and space which dilates and contracts, generating a kaleidoscopic and changeable vision of life, as it was immortalised by Dacia Manto in Asterina (2009). 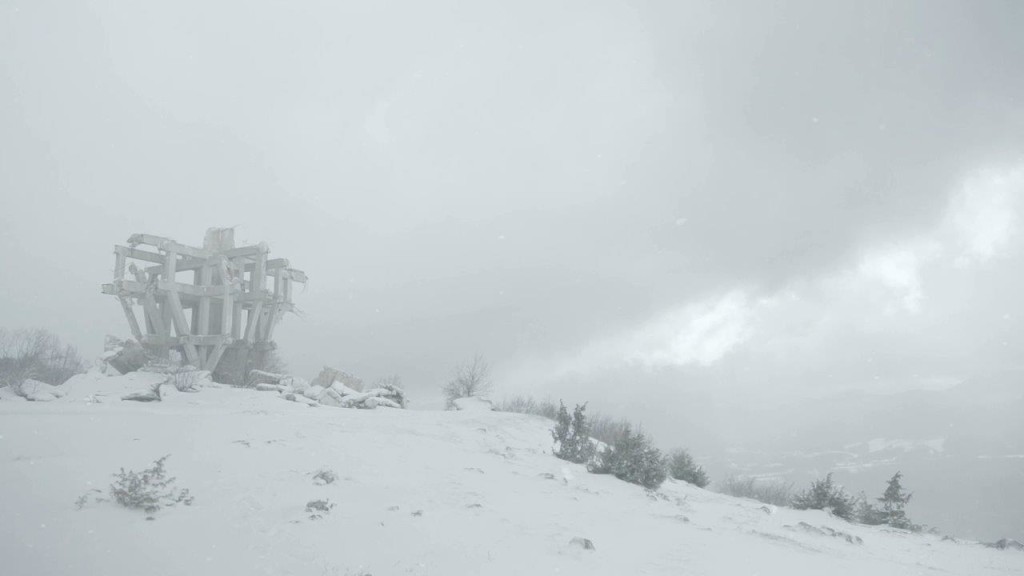 The exhibition bridged the Italian exhibition currently on show in Naples and reinforces the link between Italy and the Balkans. In Italy the partnership is reaffirmed with the video installation Monument by Croatian artist Igor Grubic. This is an experimental and poetic documentary look at the anti-fascist commemorative sculptures commissioned by communist Yugoslavia, today absorbed into the landscape and partially destroyed, eliminating all traces of an outdated ideology. 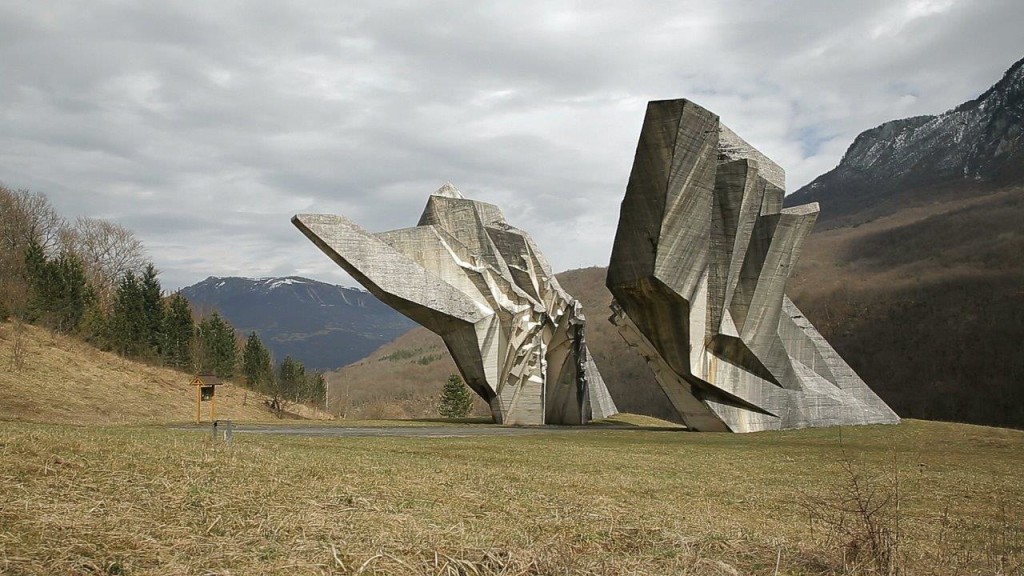 In the nineties, the right-wing Croatian government in power allowed for the systematic destruction and ruin of anti-fascist monuments which had been built in memory of fallen partisans and the innocent victims of the fascist regime, as part of an ideological show of strength against the socialist system, with the aim of boosting national identity. Igor Grubic, artist and activist, intervenes within public spaces, attempting to compel change within the prevailing conservative climate of Croatian society, in which no governmental institution seems to be interested in repairing or in taking responsibility for restoring these symbols that represent a plea for liberty, fraternity and unity. Instead, these institutions currently sustain the now entrenched nationalism that often shows itself in intolerance, hostility and prejudice. The aim of the project is to engage cultural and governmental institutions – at both local and national levels – in a debate on how to protect the heritage of the anti-fascist resistance and to begin to plan for the promotion and restoration of these monuments, thereby encouraging slow, yet persistent change.