The Italian artist and composer brings his experimental soundscapes to Valencia in an exhibition divided into three acts.

The Ana Serratosa Gallery presents the exhibition Intemperies Musicales by the Italian artist and composer Roberto Pugliese, currently one of the leading representatives of sound art in his country. The latest awards he has received have enhanced his personal way of investigating the territories opened up by new technologies through sound experimentation and installation work.

Pugliese recognises his sources in sound, kinetic and programmed art. The former is a direct consequence of his musical training, which conceives sound as an object of study and as a means of expression, although he is aware of the blurred boundaries of what we consider ‘sound art’.

From kinetic art, he learns to understand the environment as a fundamental element of the work, using mechanical means and software to generate unusual sound-related phenomena. The result: a type of work in which sound and the visual take place simultaneously, being conceived as inseparable.

His work thus links up with historical moments of artistic correspondence, such as that between Kandinsky and Schönberg, but also moments of rupture, such as dodecaphonic music or electronic music, to offer a personal panorama from which to reflect on the relationship between art, human beings and technology. 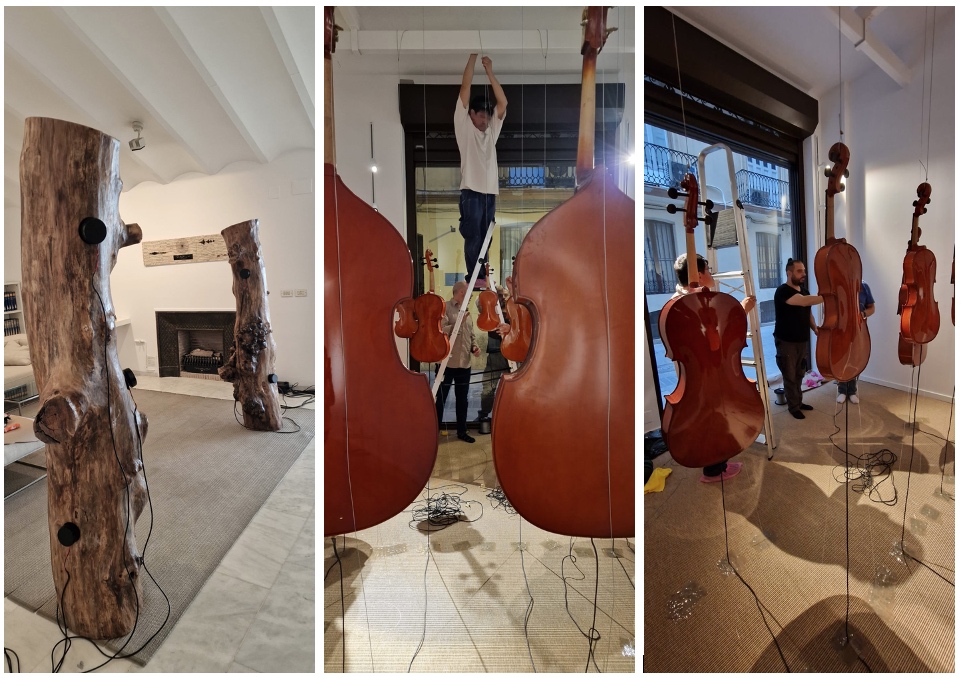 In this perspective, his concerns reveal contrasts and coexistence between the natural and the artificial, tradition and modernity, internal aspects of the musical world or environmental problems such as deforestation or rising sea levels.

All these facets are to be found in Intemperies musicales, an exhibition that expresses in its title the different origins of ‘time’, combining ‘intemperies’ (intemperie: exposed to climatic weather; negative of temperie: just temperature or climate) and musical ‘time’ (tempus, which refers to chronological time, the measurement and duration of things, hence also music) to produce new sound experiences.

An exhibition in three parts

The exhibition unfolds in three acts, which take place in the three Valencian venues of the Ana Serratosa gallery (Carrer de Vicente Beltrán Grimal 26, Carrer dels Cabillers 5 and Carrer de Pascual i Genís 19), establishing a path that takes us through the Italian artist’s different modes of experimentation and his understanding of the sound and social landscape of our time.

The path will lead the spectator to appreciate the amplification of the perception of sound, converted into an event not exempt from poetics and ethical claims, from which to perceive new worlds to explore and possible drifts towards unknown horizons.

Having graduated in Electronic Music in 2008, under the guidance of Agostino di Scipio, Roberto Pugliese, has been teaching at conservatories and academies of fine arts in Naples, Frosinone, Bari and Milan since 2009. He currently teaches Multimedia at the Naples Conservatory, an activity that he combines with his work as a musical and electroacoustic artist.With a presence in 76 group exhibitions, he has held more than 20 solo shows since 2009, and his works are on permanent display at the Giovanni Palatucc Museum of Memory and Peace (Salerno), the ZKM Museum in Karlsruhe (Germany) or the Ente Fiere (Bologna), to name but a few. Among the awards received, those from institutions such as the Amleto Bertoni Foundation (Saluzzo), the VAF Foundation and the Fundación Telefónica stand out.