Among the works exhibited: A [continuum], where each speaker transmits a different tone which was used as the standard at different moments in history, now brought together in a score that is based on their mixing and intersection; data.scan [nº1-9], part of the project datamatics, where the artist uses maths to reduce the mass of data in the real world such as DNA sequences, Morse code and particle structures made of single pixels of visual imaginaries; and point of no return, which deals with black holes where time and space are distorted by gravitational force which captures everything it encounters, positioning itself on the space-time threshold. The planck universe [macro], created during Ikeda’s residency at CERN – European Organization for Nuclear Research, uses Planck to explore man’s capacity to perceive the world on an infinitesimal scale. 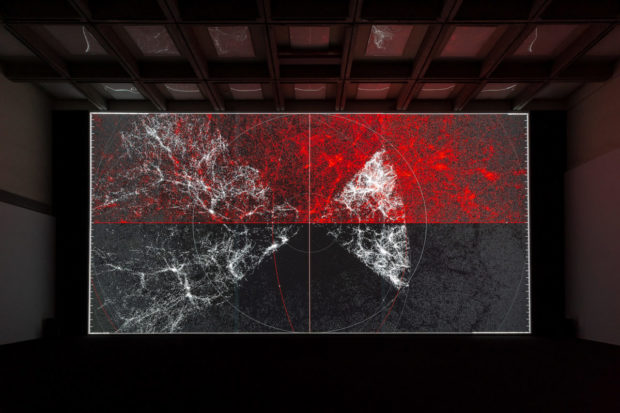 Arithmetic logic is transformed into artistic creations intended to challenge the boundaries of knowledge, delving into the infinitely small and the infinitely large of the mysterious material that generates the life, form and substance of our universe. With his installations, performances and audio-visual sculptures, Ikeda provides us with new ways of seeing and, above all, of perceiving the world. The exhibition also includes a series of experimental drawings, manuscripts and audio-visual material which can be browsed to access the developmental phases of the artist’s work and his thought processes.