The eight edition of She Devil, the show reel organized at STUDIO STEFANIA MISCETTI by a collective of curators is currently on view. Theme of this year is the MIRROR as a place of reflection and confrontation in which our image is multiplied and analyzed in a critical way, in pursuit of a new subjectivity through which to establish new dynamics of relation with the present. SHE DEVIL investigates the contours of female identity, which sometimes slides on the reflecting surface, and in other cases needs to violently smash the illusion. Between past and future, what exists reveals itself, on many different planes, in the act of looking in the mirror. The one that follows are the descriptions of the works wait for you. Each of them was selected by a curator and here are the texts that each curator wrote to accompany the work. 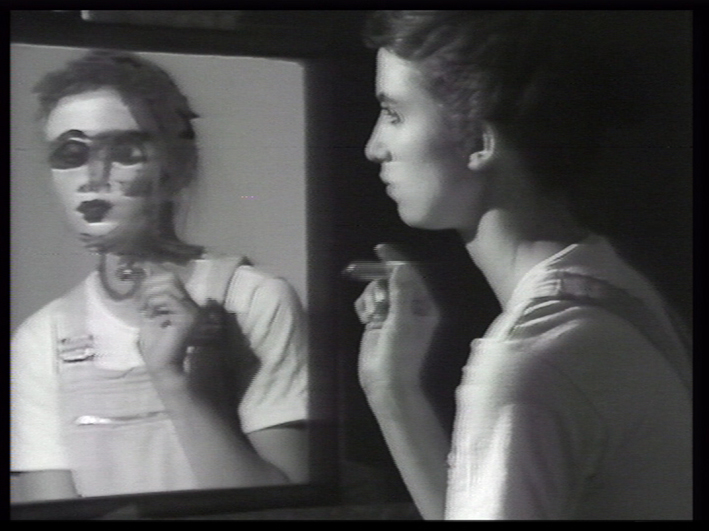 Elaine Shemilt’s video performance Doppelgänger opens the eight edition of the She Devil festival, and is part of a series of experimental videos by female artists in the 70s and 80s, rediscovered and remastered in digital format by the REWIND project. The term doppelgänger, used in German culture to indicate the evil twin (doppel /double and gänger/going away), is found as the coexistence of Good and Evil in numerous cases of dual identity in literature (Dorian Gray, Jeckyll and Hyde, Mr Golyadkin). Elaine Shemilt’s doppelgänger is entirely female. The artist puts on make-up in front of the mirror, carrying out the ritual in the reflected image against a background of music and the reading of texts about schizophrenia; the rhythm of the video montage guides us to a crescendo with the appearance of the double, who is the final protagonist of the piece.  Doppelgänger is one of the two videos that remain from the series started by Shemilt in 1974, rediscovered in 2011 thanks to REWIND, a research project directed by Professor Stephen Partridge, in collaboration with the archivist Adam Lockhart. The video is part of the project ‘EWVA European Women’s Video Art in the 70s and 80s’, started in March 2015 and directed by Professor Shemilt with researcher Laura Leuzzi. 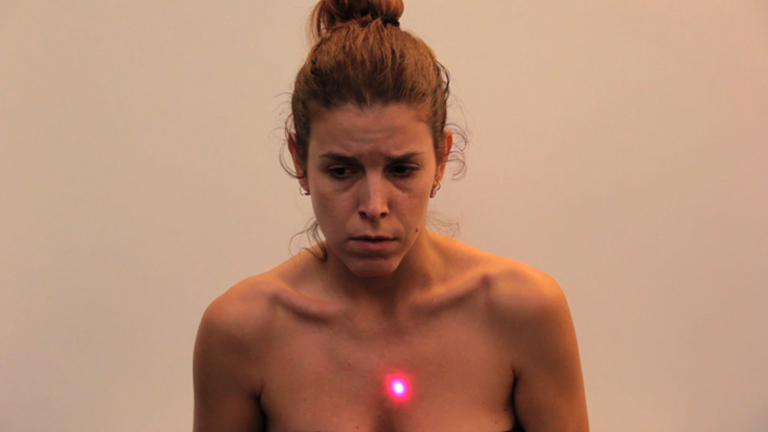 Bringing research by female artists from the 1960s and 1970s right up to date, Silvia Giambrone explores the body from a new perspective. In her 2013 video piece, Sotto tiro (‘In the Line of Fire’) her body becomes the target for a laser pointer, which gets her in its sights and takes aim. The artist’s body is naked and she has removed her make-up because, “…we’re all naked with our own anxieties.” The feeling of being threatened then sets off an instinctive chain reaction, that of exorcising her fears through seduction. The video ends without drawing clear conclusions because the artist is continuously in the same situation: “I wasn’t interested in creating a ‘closed’ piece of work, conceptually-speaking… The very difference with those watching is perhaps where I can find some common ground, a space of understanding.” 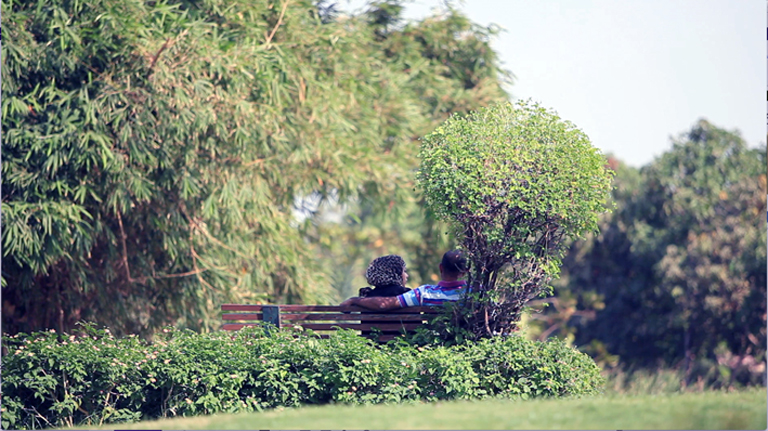 In Shooting Stars Remind Me of Eavesdroppers  by Maha Maamoun the camera traverses the harmonious vegetation and life of Al-Azhar Park, located in the center of Cairo away from the chaos and noise of the city, to then pause on a pair of lovers, secretly capturing their conversation. Poetically the two talk about notions of truth and trust: trust in the person we love and the violation of that same trust through suspicion and eavesdropping. The film subtly speaks to our position as anonymous observers and our relation to what we see, the different degree of truth inherent in a stolen conversation, not formulated to be heard (and filmed), and in one conscious of our presence. 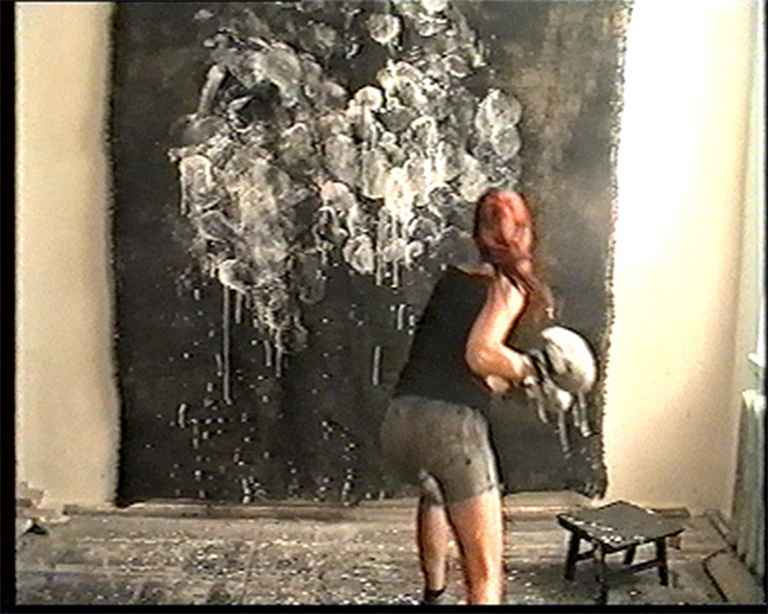 In Indispensable Defense (Self Defense), 2000-2001 the lithuanian artist Jurga Barilaitė creates an invisible ring with her body. Slipping on a pair of boxing gloves wet with paint, she stages the classic ritual of ‘struggle’: striking an enormous black canvas over and over again, she manages to create the image of a face that is both a mask of herself and, at the same time, its Other. She is a heroine using her muscles to deconstruct the myth of Gestural Abstraction, (or ‘Action Painting’) and its conventional representation belonging to a preconceived, hierarchical order. As an artist she faces her position as a painter working in the 21st Century head-on, moving from self-destruction to a creation of the Self. 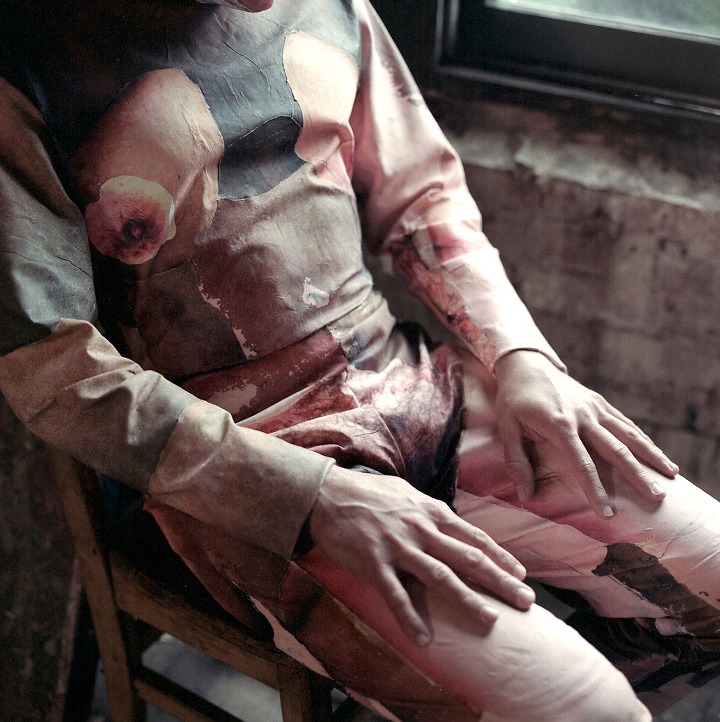 In If I were a …, 2004 by Elia Alba man looks at himself in the mirror as he puts on three different ‘suits’: each one is made with printed fabric bearing fragments of digital images of the artist’s body, of which he has changed the skin colour and distorted certain parts. The third ‘suit’ is a mix of the other two. If I were a … encapsulates a series of concepts which will come to underlie all of the artist’s subsequent work, foremost among which is an examination of identity ――be it racial, sexual, uncomfortable or distorted in its representation. Dressing up, on the other hand, becomes a metaphor for the mestizo, for the condition of migrants; the desire for the equal rights of minorities and the freedom to express oneself without censure. If I were a … is part of the permanent collection at New York’s El Museo del Barrio. 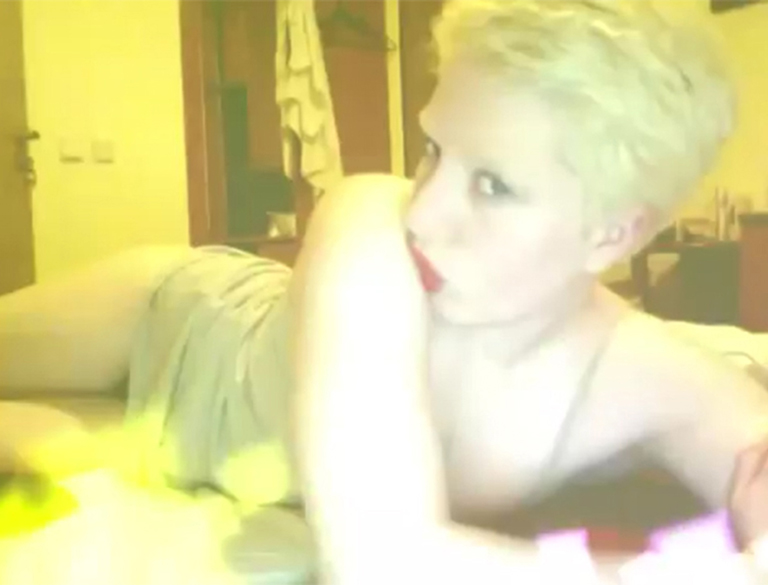 The videos that Saoirse Wall reclining nude as the v / nope not lonely (2012-13) shares freely on YouTube are highly irritating and attractive. She appears and disappears, dances and acts, seduces and reclining nude as the v / nope not lonely, makes abundant use of Newspeak (abbreviations and an almost total absence of capital letters). Her disguises in front of the camera are reflections of the many personalities that decide to show up as soon as a spotlight illuminates them. If reclining nude as the v allows us to predict, already from the title, the countless Venuses in art history that a simple Google images search show, nope not lonely opens the door to a peculiar eroticism where the chance of the virtual transforms us into the real. Seeing ourselves in highly erotic poses determines a form of a confidence in attractiveness that is able to seduce first ourselves and, therefore, potentially, everybody. In fact, no, we are not alone; nope not lonely. 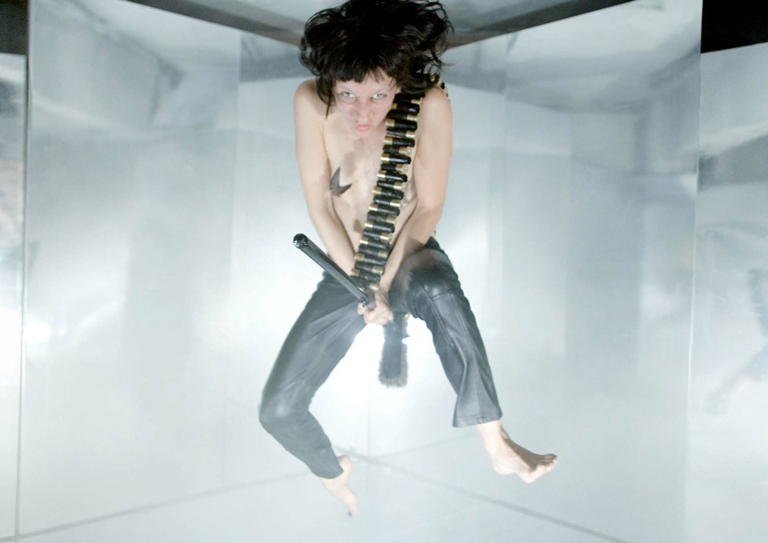 During her first years of artistic research Angela Marzullo created the character of Makita, her principal alter ego and the signature of many of her pieces. When creating her trademark, the artist opts for a name strongly reminiscent of macho culture: ‘Makita’ is the name of a brand of power tools and industrial equipment including staple guns, pneumatic drills and hammers. In Makita Witch the character rides her broomstick wearing a cartridge belt filled with bullets, like a modern witch. Through a play of mirrors Makita is reflected on walls and on the ground, creating the illusion of an uncontrollable, hypnotic dance, and accompanied by snatches of sound: ringing, breathing, white noise. The reflective surface then gradually dissolves, becoming one with the reflected image, which multiplies and leads us to the heart of a witches’ sabbath. In this animated labyrinth, the viewer’s gaze gets lost. 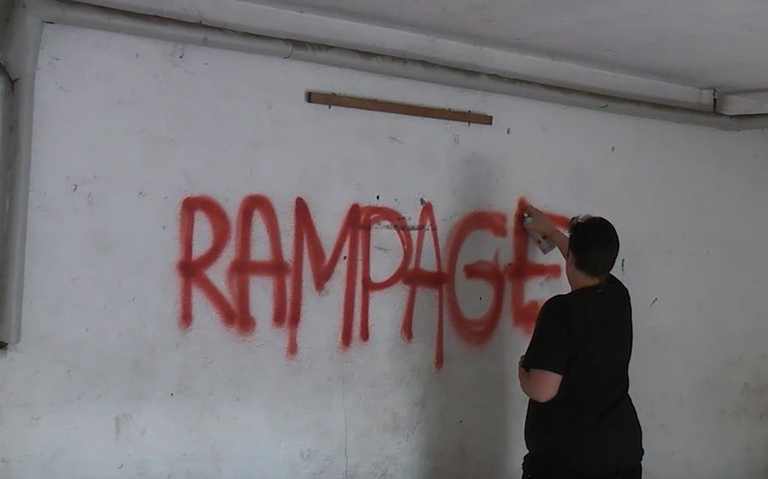 The video documents a sequence of planned actions and tasks completed by the artist with a series of previously-selected objects. These actions take place in a basement studio where objects, materials and tools of differing use and provenance are gradually accumulated over time, with no specific purpose. This private space where things accumulate becomes a singular set, while some of the objects in it are chosen to bring about a series of exercises, the which result from an uninterrupted circuit where notions of tension, balance, impulse, limits, risk and decision continuously alternate. 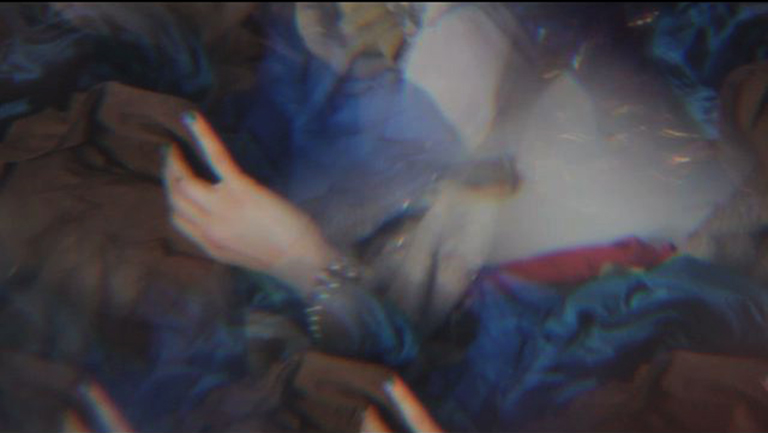 The video of Misty Rain Blue by the Icelandic artist, Ásdís Sif Gunnarsdóttir, captures conversation between a man and a woman, in oneiric atmosphere. The man’s voice empowers her, the artist who seems to be waking up from a magic dream, by asking her crucial questions about her existence. She is reflecting upon surviving, upon her life wisdom. The tool for this mystical awake is a mirror, an instrument for perception of her transformation in space and time. Ásdís is a performer and videomaker, she is a member of an artist group called “Theater of Artists” that makes glamorous evenings of performances in the basement of The National Theater in Iceland. 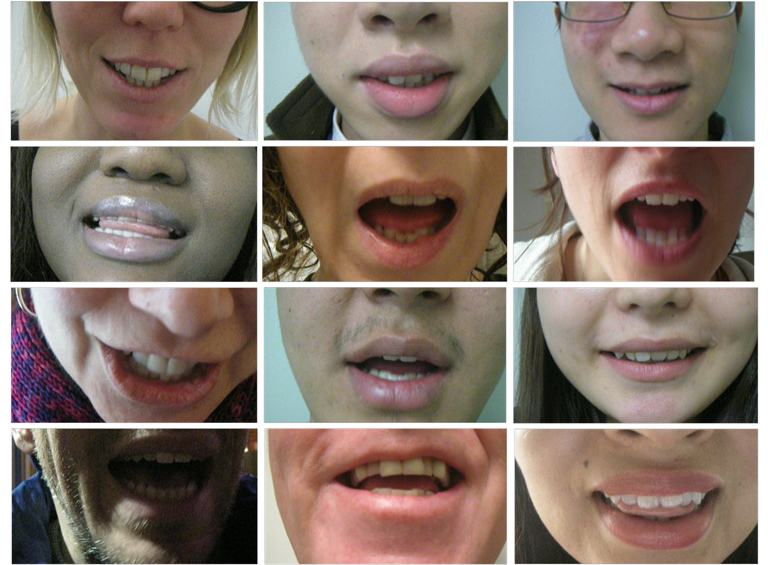 Alice Schivardi, Yellow. In 2014 Alice went to New York to take up an Artist’s Residency at the ISCP (International Studio & Curatorial Program). Alone, surrounded by strangers and unable to speak English very well, she can’t understand the conversations going on around her; she lives in a flux of sounds, rather than words. In this climate of unfamiliarity, the process of automatic recognition which comes of seeing oneself reflected in the other begins to fracture. Yellow emerges from this unease. And as with every piece of work by Alice Schivardi, a feeling takes shape and sets off a creative process: in this case a video piece (running to 31 minutes in its original version) where foreign mouths try to pronounce her name. As she herself explains, what is being staged here is, “the paradox of being recognised by those you don’t know.”

In this video performance the artist takes of, veil after veil, the many layers of fabric that are covering her head, hiding her completely. While she removes the scarves, she calls out the name of the female members of her family who gave them to her. The bright cloth patterns reflect the Kurdish heritage the artist belongs to. The headscarf, more than an object linked to a religious obligation, is here intended as an element of female identity, a bond to one’s own roots and family history. A bond that should not be negated but from which it is necessary to emancipate to bring out the truest self. Merging autobiographical and overtly political elements, Güreş addressed in her work the role of women and its instrumentalization in the troubled dialogue between Islamic and Western countries. 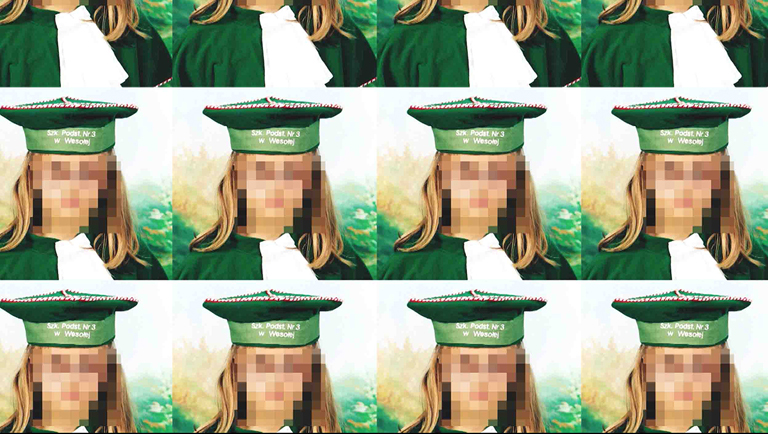 Uniform (2015) by Magdalena Golba is based on the assumption that we are able to affect the historical events, af-fect the past. Very often the history is unverifiable, historical stories often contradict each other. We can manipulate this historical image. On the other hand it is known that histori-cal events influence the present. Through manipulation of the past, we can have an impact on reality. The uniform, suit, jumpsuits, apron, overall, gown …, according to the Theory of “enclothed cognition” dress with symbolic significance makes the person wearing it subconsciously empathizes and retains as its rightful owner. The film has a form of Paradocumetary. For film’s  production was  used the situations recorded by the artist herself on the street, in various service centers and in various uniformed units. Home archives and internet sites archives were used too. It will be displayed on the screen for a movie projector.