Sintattica: The Musical Score as Drawing 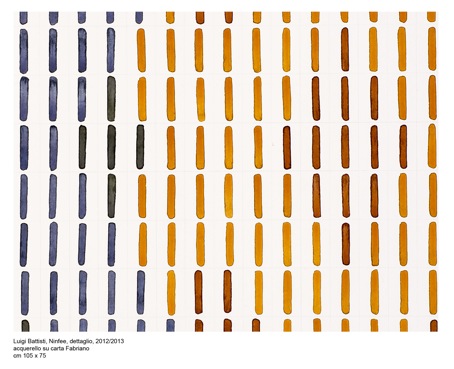 A few months ago, the singular venue of Rome’s Andersen Museum, former home and studio of the artist of the same name (left intact as far as possible), became the setting for “Sintattica”, on view until October 11, 2015.  Three Italian artists – Claudioadami, Luigi Battisti and Pasquale Polidori – created site-specific works, in dialogue with the rooms of the house-museum and «especially with the story of the lives of those who once lived there», as noted by Michela Ruggeri, who has written an excellent article about the show for Arshake, which we invite you to read here.

The exhibition contains numerous references to themes concerning the intertwining of languages and hence techniques (drawing, video, projections and sound installations) with written and spoken language.  Indeed, the word has multiple roles and functions in the visual arts, and these have been expressed in numerous ways, from drawing to painting and multimedia installation.  The exhibition was flanked by a series of parallel activities created and coordinated by curator Francesca Gallo. 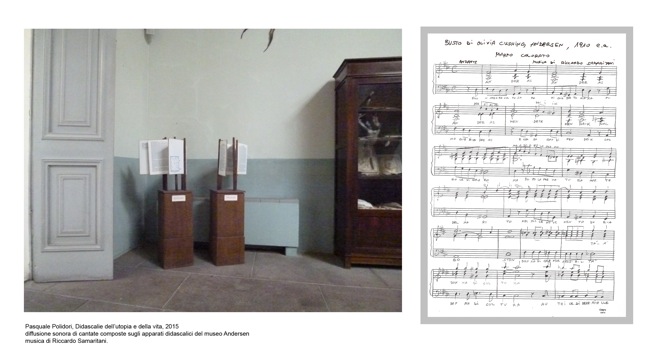 On 22 September from 4 pm, a panel of experts will address the topic of the musical score as “drawing”, in other words as a predominantly visual form, rather than a musical notation.  The discussion – at the centre of a growing interest in both the historical context and contemporary art – is linked to the particular operational mode of Luigi Battisti, whose abstract patterns can be likened to variations on a theme, so recurrent in minimalist music, and also to the conceptual painting of claudioadami, which reduces Beckett’s words to pure rhythmic sign and spacing on the page or medium.  (press release)

Museo H. C. Andersen, September 22nd, from 4p.m.: introduction by Matilde Amaturo (Director of the Andersen Museum) and there will be contributions from Elena Giulia Abbiatici (curator and critic), Marco Cimagalli (Conservatory of Santa Cecilia), Francesca Gallo (Sapienza University of Rome) and Michele Sganga (composer and musician). On the occasion it will be presented Polidori’s new video, Didascalie dell’utopia e della vita (Captions of utopia and life), shot in the atelier of the Andersen Museum, together with the Coro Sintattica, conducted by Maestro Laura Samaritani. Finally, the catalogue of the exhibition, published by Maretti, will be presented on 30 September from 4 pm.