Sensitivity mediates the transmission of reality through technology. With the paradigm of change and innovation, observation and sensory experience are the distinctive elements of the images catalysed in the work of Studio Azzurro: icons of the real in the imagination of human emotion.

The retrospective Immagini sensibili at Milan’s Palazzo Reale marks the 35th anniversary of the Italian artistic collective that prefers to define itself as a “contemporary art atelier”. With sections for distinct phases – divided by period and expressive medium – this is a journey in time via some of the most significant works in Studio Azzurro’s artistic development. Fabio Cirifino, Paolo Rosa and Leonardo Sangiorgi – the original members of the group, added to by Stefano Roveda in 1995 and various others over the years – have a reflective approach to artistic matter which, in their dextrous hands, adapts perceived reality to the dimension of a “vision” through the filter of technology, their great ally. Studio Azzurro skilfully manipulate the mediums which record evolution in the processing of images experienced intimately in their physical surroundings, with close technical and electronic attention. 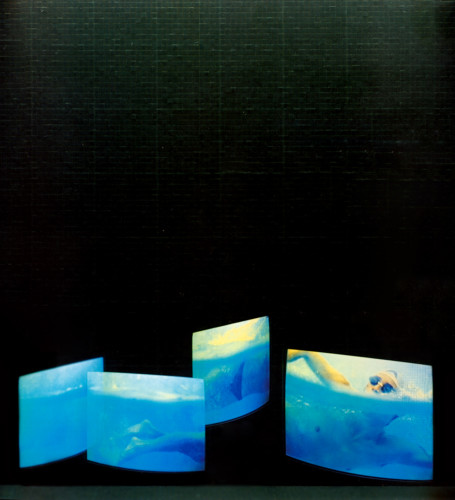 With a strong interest in the mechanism of relations between image, electronic medium and experiential empathy, they draw on complex systems to distinguish themes and ways of interacting with the public. From the public they take and give back fragments of time and space, transformed into formats which are subjugated to the transmission of a narrative text perceived as a liquid or gaseous dimension for the intangibility of its physical substance. The invitation to interaction is evident in the immobility of certain works, which remain as static images unless activated by direct input; or in the willingness to assume a reflective condition, perceptive (through the other senses too; not sight alone). 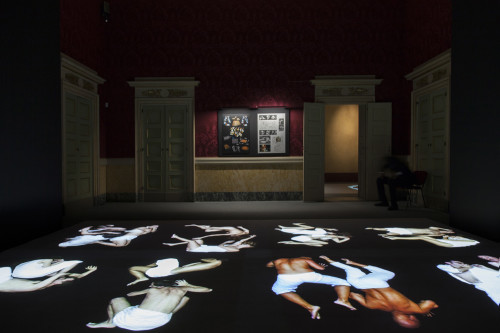 Accompanying the exhibition, the reconstruction of decades of work is also illustrated by information panels, sometimes invasive in the overall effect, which recount, with a plethora of detail, how all the “arts” have been engaged and attuned by the central theme running through the works: video, theatre, dance, film, museums. Numerous sensitive spaces are called upon to narrate the story of these years, from Coro (1995) to La Pozzanghera (2006). The immersive dimension is the predominant state found in the first room, where the re-released Il Nuotatore (va troppo spesso ad Heidelberg) – Studio Azzurro’s first ambient video installation, dating back to 1984 – opens up the darkness with the image of a swimmer, crossing 24 monitors and synchronised with Peter Gordon’s original suite as a counterpoint.

From an interactive viewpoint, the anthology exhibition does not do justice to the collective’s operational tradition, which over the years has produced works of enormous impact, to a certain extent leaving the narrative summary to the panels which sometimes dominate both space and artworks. 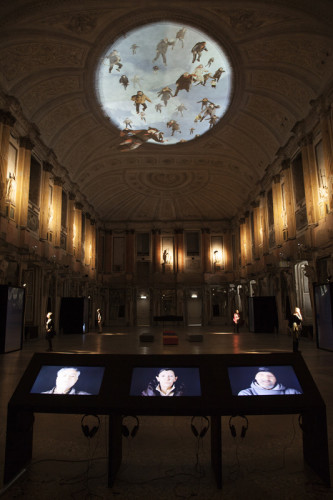 Concluding the exhibition is the site-specific work Miracolo a Milano, appropriately located in the Hall of Caryatids, where the show ends and other endless narrative worlds begin. In a luminous cameo in the centre of the frescoed ceiling, wavering figures disappear and reappear haphazardly. And at the edges of the room, large vertical monitors contain the darkened space, like digital columns. These are the “storytelling mirrors” of people narrating their life experiences, activated by the visitor entering the beam of light near the screen and creating a direct rapport with the invisible residents of Milan. Taking inspiration from Vittorio De Sica’s famous film, the marginalised are called upon to join the chorus of unheeded voices, like rhetorical figures of a metropolitan condition that renders them unseeable, at the margins of the social picture.