by Giulio Alvigini
in focus, Game Over

“A spectre is haunting Europe…” [no no, let’s try again]

“A virus is haunting the world…” [wait, I’ve almost got it]

“A spectre is haunting the art system

… the realisation that things, as they are, cannot go on any longer.”

The art world is a social framework wrapped in bubble wrap: a cosmology of bubbles filled with air, the appearance of a space which, disguising a radically reactionary attitude, never ceases to boast of intellectual emancipation and progressive thinking, where everything “is fine”, ”functions” and is “interesting”.

Just as the ice penetrates and breaks the cracks in the ground already excavated by the water, so the pandemic emergency has exacerbated an already open wound, a haemorrhage already on its way to becoming gangrene within the logic of cultural industry production.

It is therefore time to mend the exploited and frustrated body of social relations in the art world.

It is time to start fighting again, but to do so requires a new awareness, starting – in addition to the everyday life of the individual – with a greater universalised knowledge of our cultural sector. The formation of workers’ unions in the contemporary art world” – and their increase following the lockdown period – is a symptom of a common awareness of the patterns of precariousness and systemic toxicity characterising this environment for a long time. 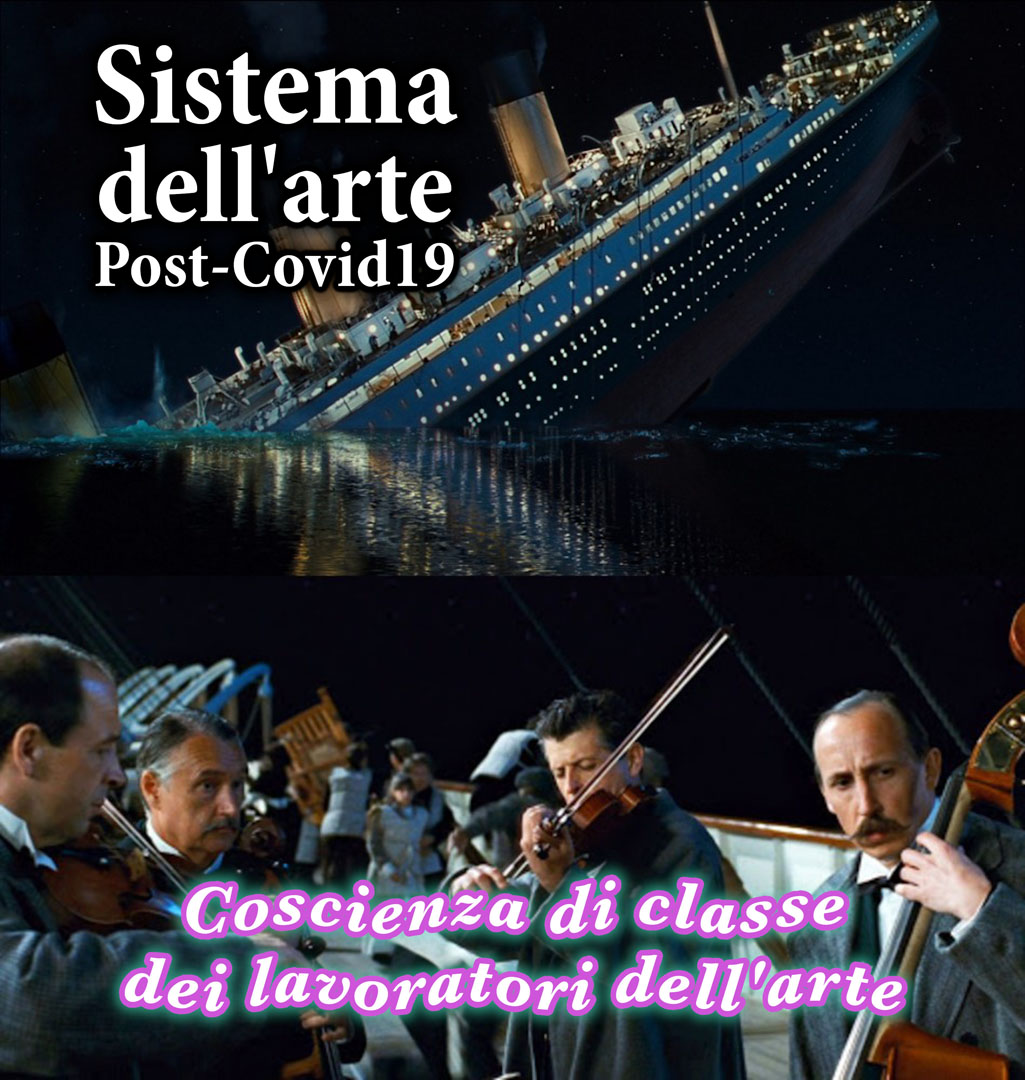 The most important thing that this pandemic has given us is, therefore, the reawakening of the class consciousness of art workers within the history of the art system itself.

Their struggles are growing rapidly, mobilising large numbers of people, yet their battles, more often than not, vanish into thin air, leaving a legacy of disillusionment, mistrust and powerlessness. All of this shows that, although the desire for a better world is widely shared, the real effects of these movements tend to go unheard.

Why? At this point I think it is no longer sufficient to outline the inconsistency of the results obtained in the processes and implementation of a political strategy. Although it is right to identify the culprit of the crisis (also) of the art system in the structure, economic prospects and capitalist thought, this may no longer be enough. So we must redirect our analysis to focus on the superstructure.

Since overthrowing and eroding a corrosive hegemonic landscape is a duty, if not an obligation, uncovering its traces through an individual self-consciousness must be a first step towards the recognition of a universalised consciousness. 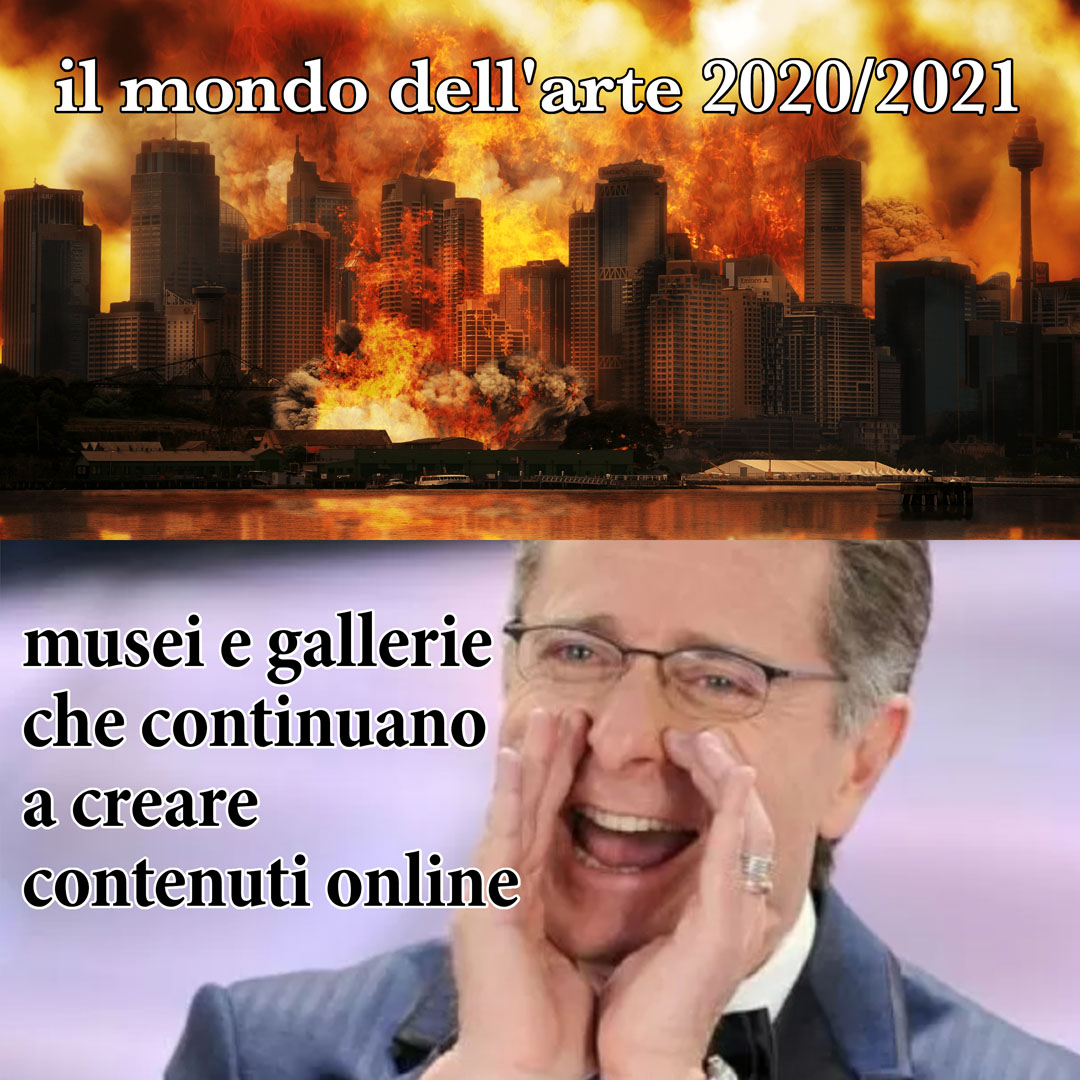 If we are looking for a culprit, we will find it by looking in the mirror.

At this level then, our enemy is not still capitalism. The first adversary to be beaten is our propensity to “sit on the fence”.

Recognising the contradictions and hysteria embodied in the art system means uncovering the critical issues hidden behind the blinding splendour of events and rituals: conformism, opaque informativeness, voluntary self-exploitation, etc.

In order to overcome the crisis in the art world, while waiting for the current economic system to be overcome “on the right”, we need to review our complicity and our acceptance of the behavioural diktats that the art world imposes on us, penalty of exclusion from its elitist and moralistic logic.

Only then will we be able to say goodbye to our chauvinist, exploitative, patriarchal, old-fashioned and sitting-on-the-fence art world with a nice: “Bye Bye Boomer, Game Over Art World!”.

images (all): ©Giulio Alvigini per Game Over

The intervention by Giulio Alvigini is part of GAME OVER.Loading, a project aimed at researching and studying new “cultural entities”, people, objects or research from different disciplines (physics, bio-robotics, AI, agriculture and medicine) and transporting them into the art world. This is a research project, but also a gesture that goes beyond simple interdisciplinary dialogue, becoming quite radical: a real “transplanting” of research areas aimed at preparing future c(o)ulture, where “creativity” equals “invention” and “invention” equals contributing to a transformation. A spark, a sign of a genetic mutation, a change of direction, a short circuit. A different energy that is also marks a change which is taking place and could constitute new lifeblood for the Culture system. This first phase is an investigative one aimed at visionaries, hybrid thinkers from various fields, including those from the cultural sector, who can express their views on current needs, each in relation to their own disciplinary field while generally respecting culture and society at large. Project team: Anita Calà Founder and Artistic Director of VILLAM | Elena Giulia Rossi, Editorial Director of Arshake | Giulia Pilieci: VILLAM Project Assistant and Press Office; Chiara Bertini: Curator, Coordinator of cultural projects and collaborator of GAME OVER – Future C(o)ulture | Valeria Coratella Project Assistant of GAME OVER – Future C(o)ulture. Previous interviews and interventions: Interview to Amerigo Mariotti by Azzurra Immediato (Arshake, 25.02.2021); Interview to Primavera De Filippi by Elena Giulia Rossi (Arshake, January 21, 2021); , Interview to Valentino Catricalà by Anita Calà and Elena Giulia Rossi (Arshake, 04.02.2021); multiple interview Stefano Cagol to Antonio Lampis, Sarah Rigotti, Tobias Rehberger, Michele Lanzinger, Stefano Cagol (Arshake, 11.02.2021); Andrea Concas’s video intervention (Arshake, 18.02.2021);interview by Azzurra Immediato to Leonardo Jaumann (Arshake, 28.01.2021); Interview to Peter Greenway by Stefano Cagol (Arshake, 04.03.2021).