No Result
View All Result
Home Game Over

The artist and engineer talks about his latest project AlphaGarden, projected into the future challenge of possibile cooperation between human and machine

by Elena Giulia Rossi
in Game Over, Interview

Ken Goldberg contributes to GAME OVER. Loading by talking about AlphaGarden, the incredible research project that he is bringing forward with the University of California, Berkeley  lab, in order to develop AI systems for polyculture gardening, an AUTOLAB project that wants to find out if humans can train robotic control systems to fully automate a polyculture garden of edible plants and invasive species. The project stems form the pioneering Telegarden, that had enabled users to planting a garden through the internet as early as the mid Nineties. Alphagarden foregrounds the beauty of nature and exposes the limitations of AI and robots, becoming an extremely important moment of reflection on the very next future.

Elena Giulia Rossi: ”AlphaGarden foregrounds the beauty of nature and exposes the limitations of AI and robots”. In reference to this initial statement of yours, at this point of the project what outcomes really surprised you, against any prediction?

Ken Goldberg: We wrote that in Fall 2019, so the biggest surprise was Covid-19 in Spring 2020, which demonstrated the sublime power of nature and dramatically exposed the limitations of AI and robots.  Covid-19 had a direct effect on the AlphaGarden, because we were not allowed to access the greenhouse — the garden got cut off from irrigation and we watched helplessly via the camera as the garden slowly died over a period of weeks, which reminded us visually of Picasso’s Guernica. 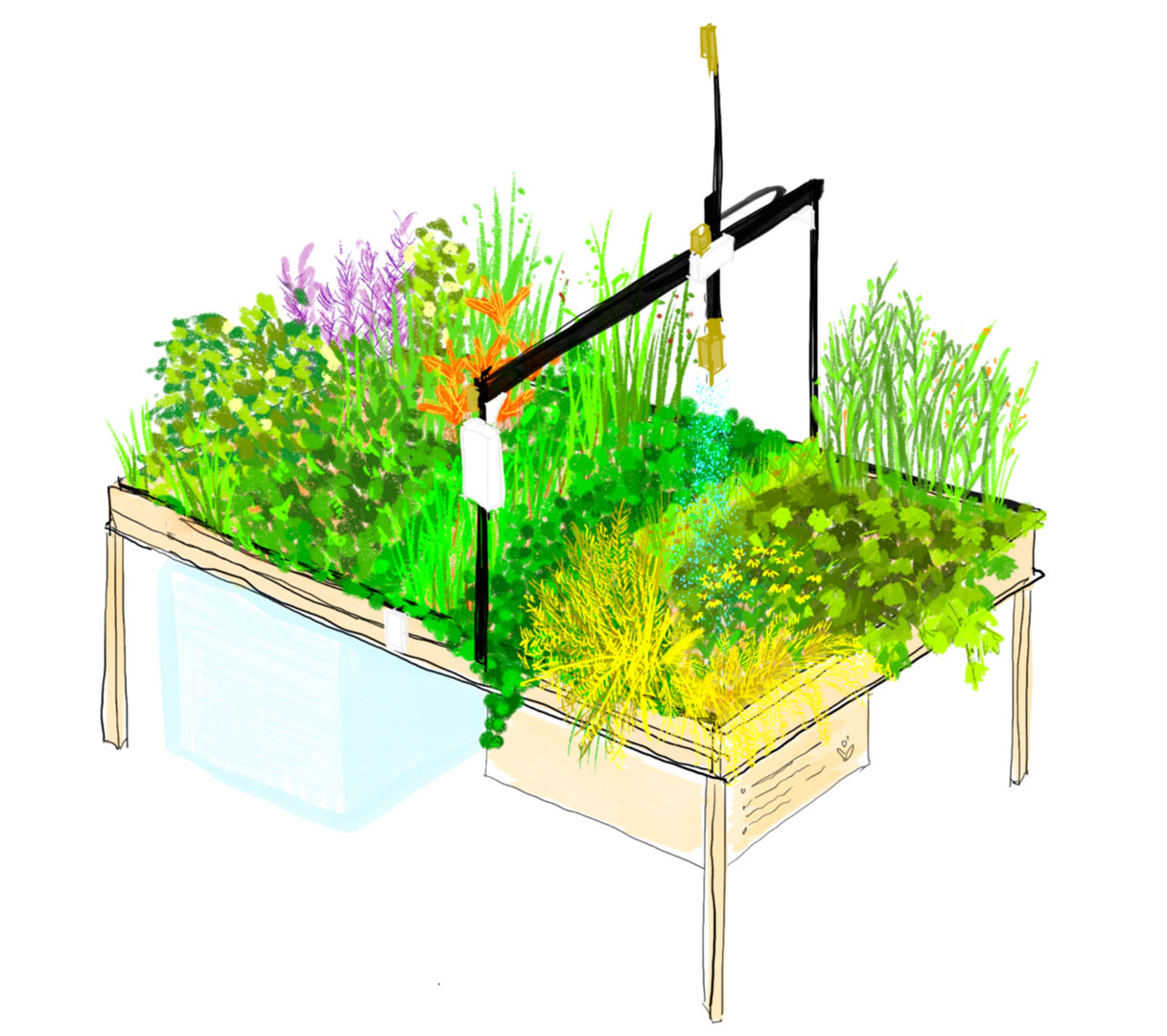 What are the criteria of selection for the species of your policulture garden and for seeds placement?

We look for diverse species of edible herbs, that vary in terms of germination and maturity times, shape of leaves, etc.  Seed placement is very subtle, initially we placed seeds randomly but  in future generations we will plant according to mathematical models we’re developing.

“AlphaGarden does not assume the garden will flourish”. You challenge the interaction between nature and machine with an extreme experiment that calls into play natural and artificial intelligence, reality and simulation. In concomitance to this, could the monitoring of the policulture provide the possibility to study seeds placement optimization? Could this be a challenge for some kind of ecological improvement, beyond automatization?

What is the role of man in this experiment? In what measure is he or she is enabled to intervene into the process?

Currently we prune manually but we are developing an automated pruning tool, we want to explore the potential for a completely automated garden with no human touch.

This work stems from Telegarden started back in 1995 as an art installation that allowed web users to view and interact with a remote garden filled with living plants. Remote users were enabled to planting, watering and monitoring the progress of seeding through a robot arm and a camera.  At the time, the Internet was just entering our day-to-day life. The possibility to operate in remote was such a new feeling and opportunity. It was also addressed as a metaphor for the social ecology of the net… The installation lasted 9 years, a very wide time-frame considering how fast technology and society have been moving. 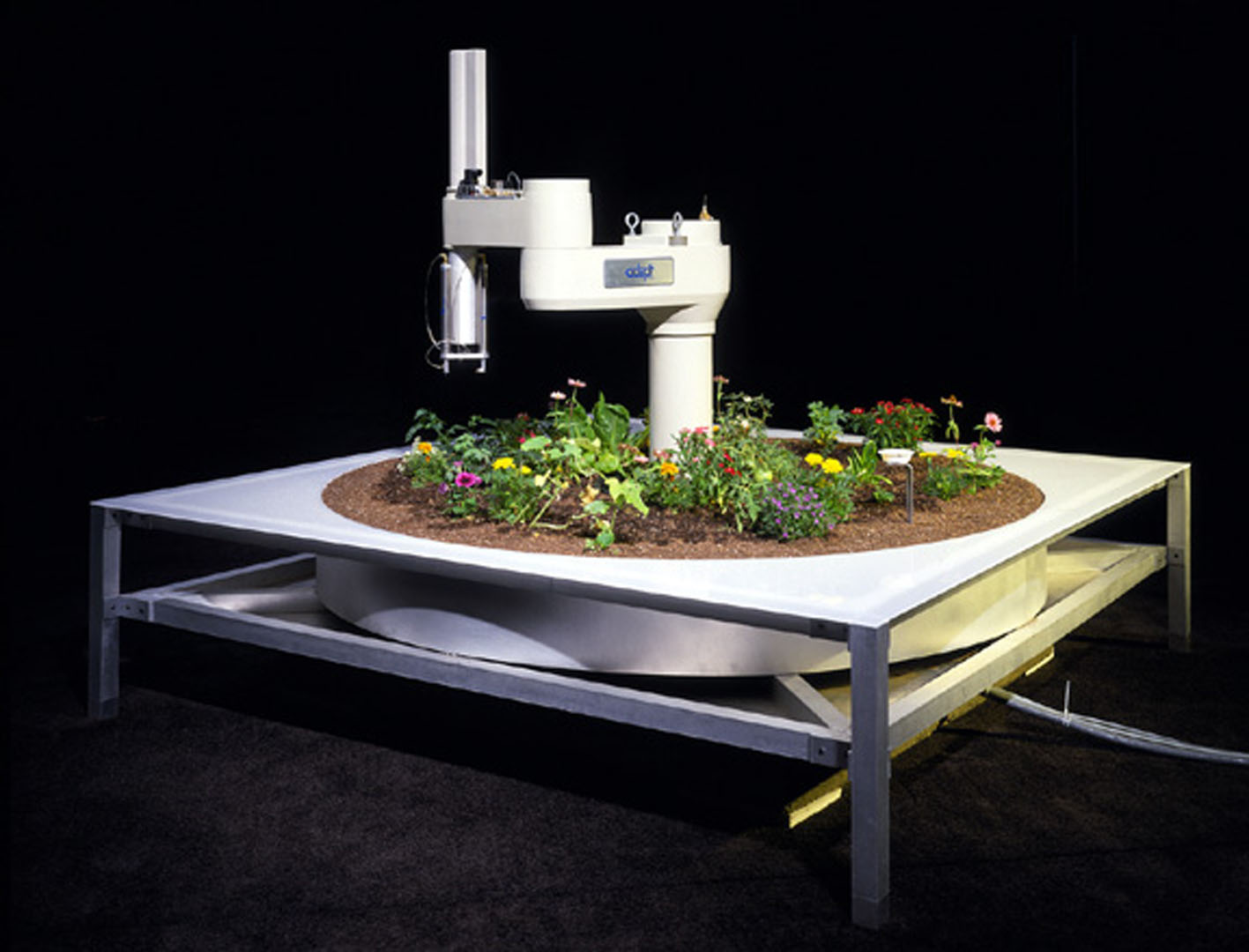 What outcome(s) surprised you the most in relation to the physical garden as well as to the social ecology of the net? Did you choose any particular criteria for choosing and placing seeds?

In the Telegarden there was no AI, it was a site-non-specific earthwork that questioned assumptions about the internet and social interaction among human participants.  we let members plant anywhere they wanted to.  What surprised us was how many people participated and how many returned repeatedly.

During your recent intervention at the Maker Art Fair, answering to Laura Leuzzi who asked you what brought you into the art realm from a background in engineering you said that you always wanted to be an artist. What does artist mean in your vision?

Someone who creates novel images or experiences that question assumptions.

What culture means to society and what could it mean if brought back to an age when ars comprised any kind of applied discipline?

There are so many answers to that question. In some sense that’s the focus of UC Berkeley’s Art, Technology, and Culture (ATC) Lecture Series, which we’ve been hosting since 1997. ATC lecture series is an internationally respected forum for ideas, where creative minds inspire the next generation of artists and thinkers. Always free of charge and open to the public, the series is coordinated by the Berkeley Center for New Media and has presented over 200 leading artists, writers, and critical thinkers such as Vito Acconci, Doug Aitken, Laurie Anderson, David Byrne, Sophie Calle, Gary Hill, Pierre Huyghe, Miranda July, Billy Kluver, Bruno Latour, Maya Lin, and Charles Ray who question assumptions and push boundaries at the forefront of art, technology, and culture [You can view here the list of speakers, as well as information on past and upcoming events]

Ken Goldberg is an artist and professor of engineering at UC Berkeley. Goldberg explores the intersection of the digital and the natural worlds. His artworks include a live garden tended by a robot controlled by over 100,000 people via the internet, a 1/1 millionth scale model of Frank Lloyd Wright’s Fallingwater, and award-winning short documentary films about robots and Jewish identity. Goldberg’s projects have been exhibited at the Whitney Biennial, Venice Biennale, Pompidou Center (Paris), Walker Art Center, Ars Electronica (Linz Austria), ZKM (Karlsruhe), ICC Biennale (Tokyo), Kwangju Biennale (Seoul), Artists Space, and The Kitchen (New York). He is Founding Director of Berkeley’s Art, Technology, and Culture Colloquium and has held visiting positions at San Francisco Art Institute, MIT Media Lab, and Pasadena Art Center. Goldberg was awarded the National Science Foundation Young Investigator Award in 1994, the NSF Presidential Faculty Fellowship in 1995, and was named IEEE Fellow in 2005. His work is in the permanent collections of the Berkeley Art Museum, the Nevada Museum of Art, and the Whitney Museum. Goldberg is represented by the Catharine Clark Gallery in San Francisco.

The interview to Ken Goldberg is part of GAME OVER.Loading, a project aimed at researching and studying new “cultural entities”, people, objects or research from different disciplines (physics, bio-robotics, AI, agriculture and medicine) and transporting them into the art world. This is a research project, but also a gesture that goes beyond simple interdisciplinary dialogue, becoming quite radical: a real “transplanting” of research areas aimed at preparing future c(o)ulture, where “creativity” equals “invention” and “invention” equals contributing to a transformation. A spark, a sign of a genetic mutation, a change of direction, a short circuit. A different energy that is also marks a change which is taking place and could constitute new lifeblood for the Culture system. This first phase is an investigative one aimed at visionaries, hybrid thinkers from various fields, including those from the cultural sector, who can express their views on current needs, each in relation to their own disciplinary field while generally respecting culture and society at large. Project team: Anita Calà Founder and Artistic Director of VILLAM | Elena Giulia Rossi, Editorial Director of Arshake | Giulia Pilieci: VILLAM Project Assistant and Press Office; Chiara Bertini: Curator, Coordinator of cultural projects and collaborator of GAME OVER – Future C(o)ulture | Valeria Coratella Project Assistant of GAME OVER – Future C(o)ulture. Previous interviews and interventions: Interview to Amerigo Mariotti by Azzurra Immediato (Arshake, 25.02.2021); Interview to Primavera De Filippi by Elena Giulia Rossi (Arshake, January 21, 2021); , Interview to Valentino Catricalà by Anita Calà and Elena Giulia Rossi (Arshake, 04.02.2021); multiple interview Stefano Cagol to Antonio Lampis, Sarah Rigotti, Tobias Rehberger, Michele Lanzinger, Stefano Cagol (Arshake, 11.02.2021); Andrea Concas’s video intervention (Arshake, 18.02.2021);interview by Azzurra Immediato to Leonardo Jaumann (Arshake, 28.01.2021); Interview to Peter Greenway by Stefano Cagol (Arshake, 04.03.2021), Intervento di Giulio Alvigini, Bye Bye Boomer, Game Over Art World (Arshake, 11.03.2021).