An experimental project of figure theatre online for “Residenze Digitali”, a project of contamination between performing arts and the digital environment

Theatre finds its space of performance also into the digital realm, as seen in the project Into the Woods – La finta nonna (The Fake Grandmother), a variation on the story of Little Red Riding Hood, by Lorenzo Montanini, Simona Di Maio and Isabel Albertini for Residenze Digitali.

In this version of the tale (belonging to the tradition of the Italian Abruzzo’s region), the wolf is a killer whale who has eaten the grandmother and takes her place. Little Red Riding Hood is called Anna and is sent by her mother to fetch a sieve for the flour. Anna goes through the forest and gives some doughnuts to the river Jordan, so that she can cross it, and some bread made with oil to Porta Rastrello, so that she can pass through it. She gets by on her own, managing to escape from the killer whale without needing any hunters to rescue her. She is helped and protected by the river Jordan and Porta Rastrello, grateful for the gifts they received. 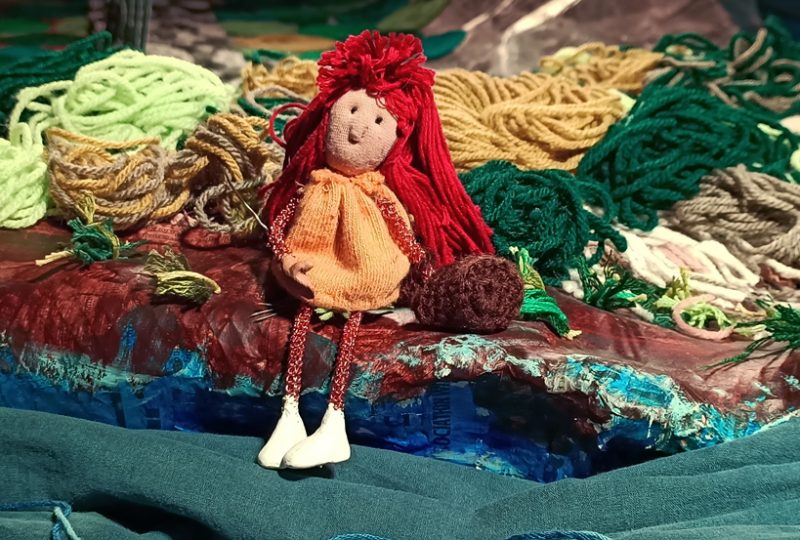 Seven episodes over seven days, aimed at children, stage the fairy tale which is revisited by experimenting with “figure theatre” and using 360° film clips, allowing users to navigate the space and also revealing the artists at work behind the scene. When looking through VR glasses, objects become larger.

This work stems from the encounter of three artists who combine their professional skills. Isabella Albertini built the set and characters with recycled objects, salvaged from poor materials or sewn together. Anna, the main character, is a rag doll moved with a toothpick and the path is made using blue and green threads of wool. Simona di Maio brings her experience of theatre with children to the performance and Lorenzo Montanini adds his interdisciplinary work ranging over theatre, video and performance.

AUDIENCE ON STAGE at Larcen C