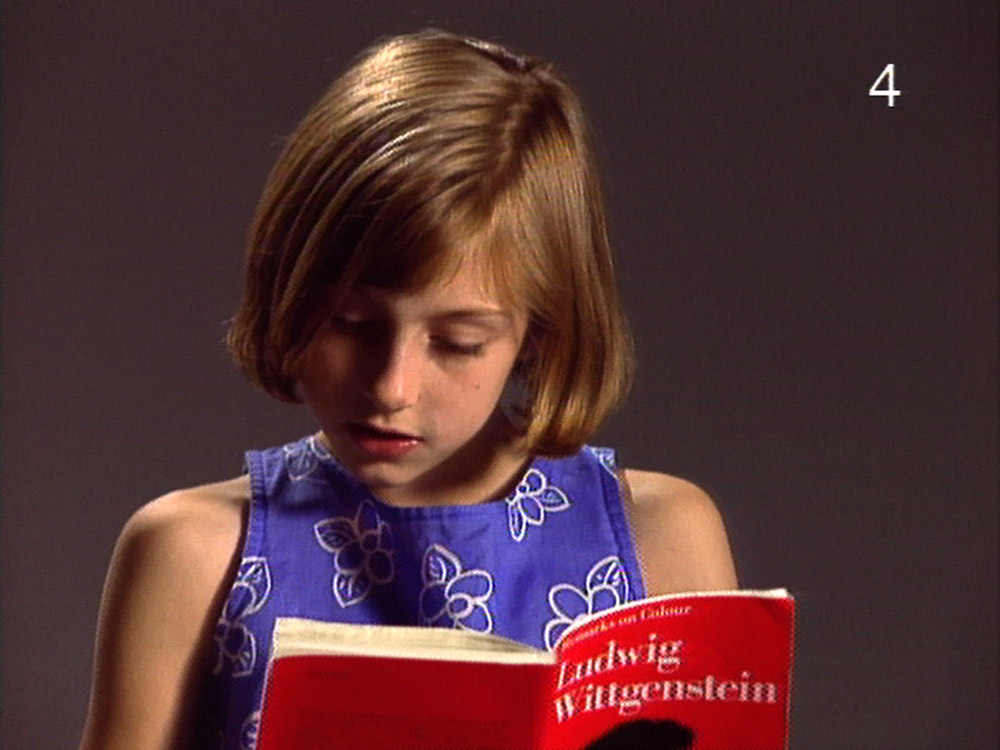 Today, the second of three dates with Francesca Gallo, who takes a historical look at the role of the written and spoken word in video art. Please visit here the first part of the essay.

…Over the course of time, new forms of conceptual art are added to the classic modes, forms in which the literary dimension – or in any case the signified – tends to prevail. This is a process linked, to a certain extent, with the cultural and artistic climate of the nineteen-eighties, a period which saw a growing tendency to citation, to the use of pre-existing cultural material (paintings, poems, novels, film and so on), not merely as a source of inspiration, but as an inherent element of the work itself, even in the field of video art, which was originally distinguished by its marked anti-academic nature. Along the way, we see an increase in the presence of literary and poetic texts within art video.

A maestro in this field is Gary Hill, an artist who began by transforming articulated language into indistinct sound, for example in Mediations (towards a remake of Soundings) (1979/86), in which a voice reading text written by the artist himself becomes gradually obliterated because the speakers transmitting the sound are filled with sand – a material that on the one hand buries the audio, while on the other giving the visual image of sound vibration. Indeed, the words become an inarticulate noise. 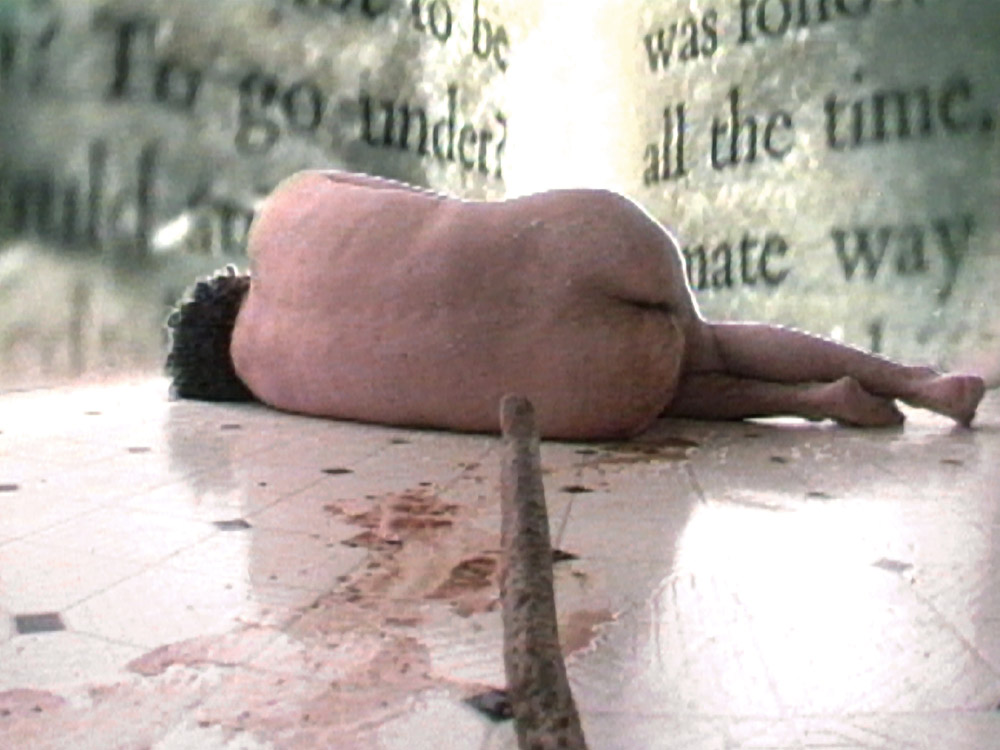 A large part of Hill’s work is concerned with the spoken word, although it avoids straightforward narration, which traditionally the realm of cinema. Also from the eighties is Ura  Aru (1985-86), his video on palindromes, or words which are reversible and which have a meaning when read backwards. Hill chooses to work with the Japanese language, while the transliteration in the Latin alphabet and the English translation scroll across the screen. If from a linguistic point of view palindromes are often likened to anagrams, from the visual angle it is interesting that this kind of reversal and transformation is fairly intrinsic to the nature of videotape, which can move forwards and backwards, and which lends itself to a series of visual effects based on repetition, mirror effects, rewinding of the tape, fade-outs and fade-ins etc. Furthermore, the work hinges on the association between the words and their visual equivalents; the images are subject to the same treatment as the sound, particularly the alternation of the tape, running forward and backward. Under such treatment, the meaning of the image and that of the word change, but less so in the case of the visual register, where I do not believe an equivalent to the palindrome exists. The visual image, in fact, is usually considered as a unitary whole, not so easy to analyse as the word, which can be broken down into letters. 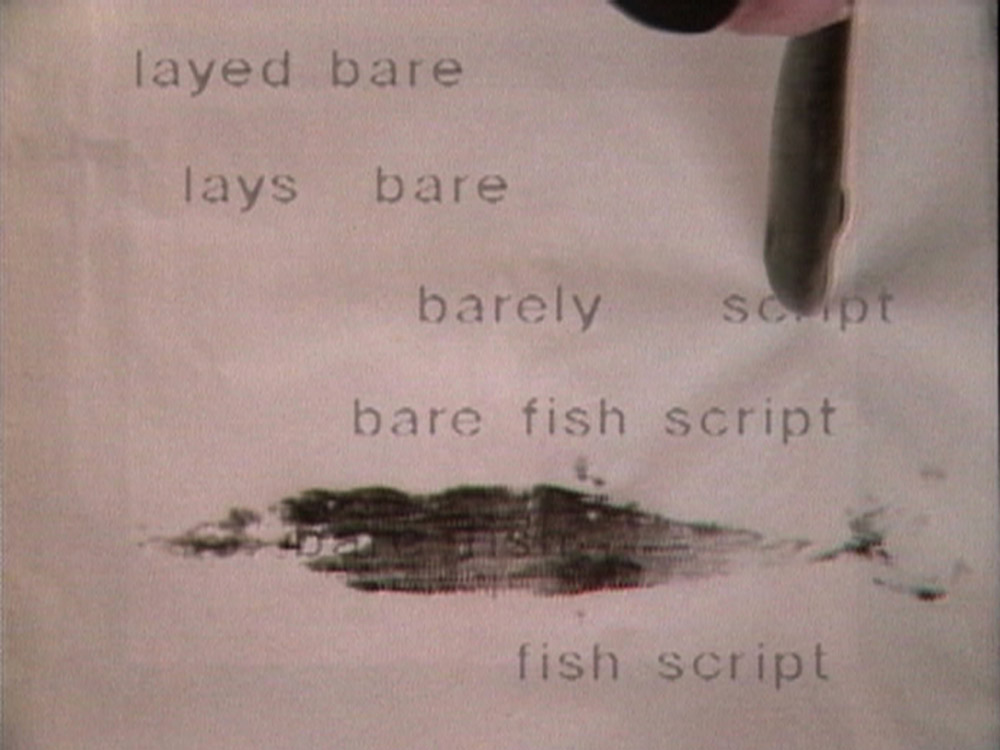 Moreover, I am convinced that such an approach is more common when we are addressing a foreign language, whose sounds and signs are unfamiliar to us, and to which we are attracted by the formal dimension rather than the semantic one, which often escapes us.

In general, and to better place these examples of Hill’s work into context, it should be pointed out that the artist is experiencing the fascination of Alice in Wonderland and Through the Looking Glass: texts in which the world has lost its usual reassuring appearance.

In other works by the Californian artist the spoken word is linked to the body and voice of the artist himself, but this centrality is also part of an oeuvre which tends to transform the passivity of seeing into an active spatial narrative: images are forced to the surface by the written word and phonation.

From the 80s onwards, Hill also turns towards literature, and for a period of time he is fascinated by a highly complex writer, Maurice Blanchot, whose texts appear in several of his works. One of these is the video Incidence of Catastrophe (1987), which takes Blanchot’s novel Thomas the Obscure as reference point and focuses obsessively on the text and the action of reading. In fact the protagonist of the video is practically hunted down and attacked by the text, the written word, the pages: he is absorbed into the book itself. Moreover, Thomas the Obscure in itself is a fairly complex work – the first version, published in 1941, was followed ten years later by a much-reworked second edition; the title of the plotless novel is a reference to the pre-Socratic philosopher Heraclitus, while its protagonist himself is obscure.

In this video the language of words appears primarily in the form of writing, as the pages of a book; enlarged, turned, flooded by water. It is a sort of intensive reading experience which the protagonist – played by Hill himself – evidently undergoes and seems almost to perish in the attempt, with the unrelenting alternation of the rough sea and a drowning naked body. Social gatherings are also  engulfed by the vortex of the reading: at one point the lavishly laden table where the protagonist takes his place is literally overturned by deep forces[1].

Hill’s predilection for texts that hinder a direct and immediate relation with the referent is an aspect of his work which concentrates several years later on Ludwig Wittgenstein’s 1950s text Remarks on Colour. Hill’s 1994 video of the same name shows a child (the artist’s daughter) reading Wittgenstein’s text aloud, not without difficulty. Her uncertainty and the lack of congruity between the reading and the meaning of the text – which clearly cannot be understood by a young child – here makes Wittgenstein’s reasoning incomprehensible to an adult audience too. In this way the language of words is reduced to a physical, vocal and sound dimension, while the viewer’s attention shifts to the image.

I believe that a similar procedure can also be found in a recent work by Pasquale Polidori: Forma Manifesta, a trilogy dedicated to the poets Amelia Rosselli, Sandro Penna and Giosué Carducci. The title refers to the effort and intense work concealed beneath the polished form, whether of a poem or an athletic performance. In both cases the coefficient of artificiality is high and sometimes directly proportional to the aesthetic result. Unlike visual and sound forms of poetry, or the most driven performances, Polidori is not interested in the deep-seated, instinctive and emotional substratum which can also be explored by the voice; on the contrary, the work of unravelling poetic connections is conducted in a rational, analytical manner. 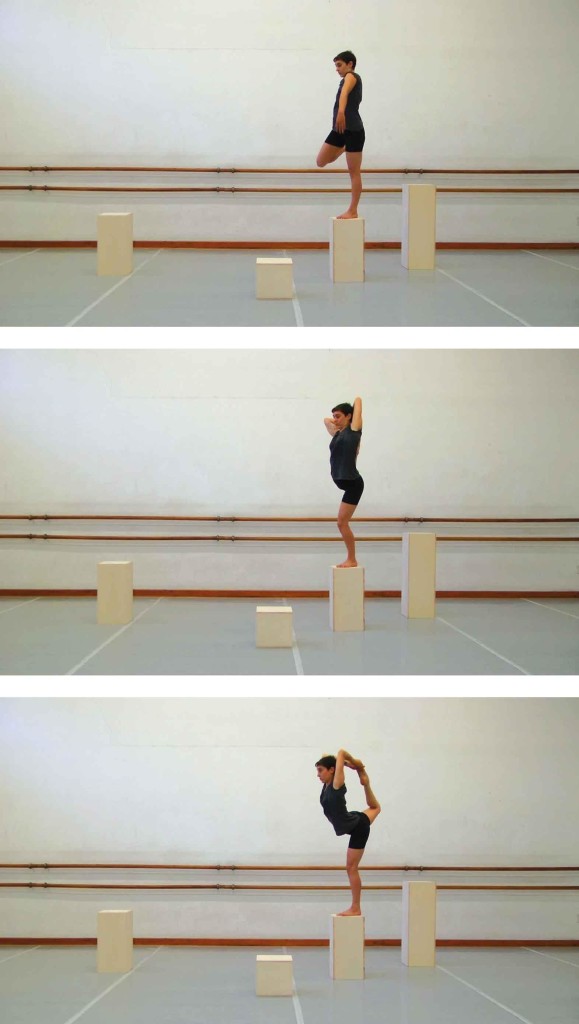 The word is given back its body and its voice, in a highly concrete form: rhythm and meaning are fragmented by the laboured breathing of young women engaged in gymnastic poses. The text, therefore, loses the coherence and rhythmic structure which sustains the syntax in poetry. But Polidori’s work is not limited to this. Although it arises from a study of linguistics, his work always addresses the theme of the speaker, connoted culturally and physically. In fact, in Forma manifesta the camera lingers on details of the bodies, for example, and in the video dedicated to Giosué Carducci the gymnast is clearly equated to a statue, balanced on a pedestal, so that the poses she assumes as she “does not recite” the poetry evoke the bodily rhetoric in ancient or Baroque statuary.

In Forma Manifesta the rhythm of the words is established by the artist himself as he displays notices off-camera showing the verses of poetry, in a quasi-tyrannical compositional role. For Pasquale Polidori, as for other artists mentioned here, is worth noting that sound is not extraneous to their work, but present primarily in voice, ranging from whisper to song[2].

This is the second of three dates with Francesca Gallo, who takes a historical look at the role of the written and spoken word in video art. Please visit here the first part of the essay.