One of the forerunners of cerebral implant is Neil Harbisson, the first cyborg to be legally recognised, who has been able to perceive the musical frequencies of colours using an eyeborg, an antenna implanted in his brain and developed together with a computer scientist, Adam Montadon, since 2004. Harbisson was born with a condition, achromatopsia, the inability to see colour, which allowed him to live in a black-and-white film until the age of 21. Over time, the eyeborg has gone beyond colour vision and in addition to translating colour waves into sound waves (this is called sonochromatism), he has been fitted with a Bluetooth device to connect via wi-fi and… see information travelling over the network directly in his brain. The use of the antenna for artistic purposes has led him to create works of art such as sonochromatic paintings and, lately, to sell his unique and temporal chromatic perceptions as an NFT Non- Fungible Token.

As advocate of cybernetics for everyone, the first legally recognised cyborg describes his antenna as R-R: real reality. “I think virtual reality is a waste of time, when there is a real reality that you can’t experience all the way through.”

If surveillance has been exercised on humans, then humans should also exercise surveillance on the mechanisms that are functional to life, such as the chromatic gradations of the world, the geological vibrations of the surrounding landscape, heartbeats… 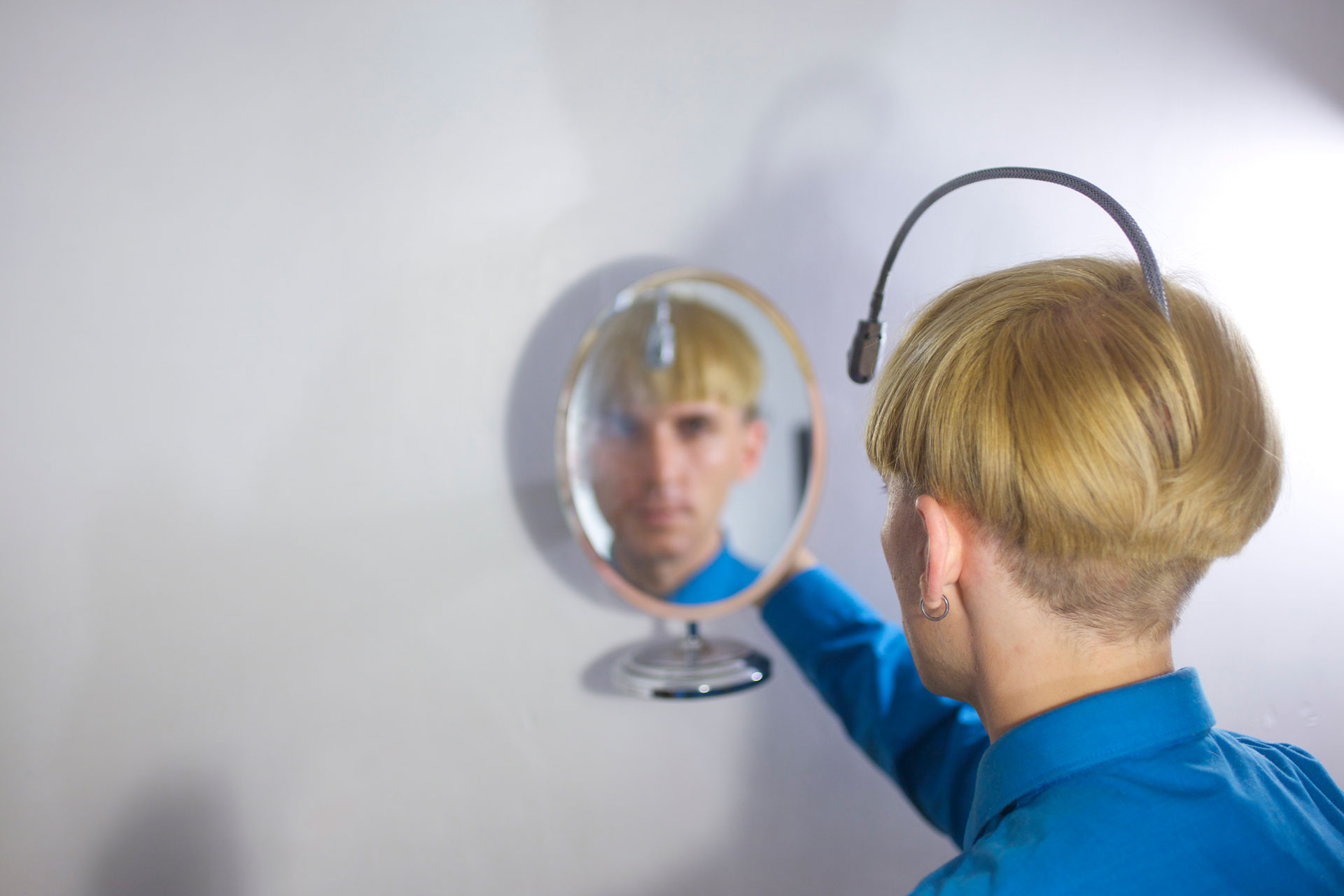 The Cyborg Foundation in Barcelona, whose co-founder is Neil Harbisson together with Moon Ribas, is ready to claim the rights and identity of the new cyborgs: individuals born with a human body, but ready to amplify it with sensors that allow them to create hybrids and go beyond the sensory limits imposed or suggested by human fate. For this other reason, they co-founded in 2017 the Transpecies Society, an offshoot of the Cyborg Foundation, to support humans who want to absorb peculiarities of other species in a curious and transcendent exchange, generating perspectives and sensations never known and never possible before by the human species and viceversa. 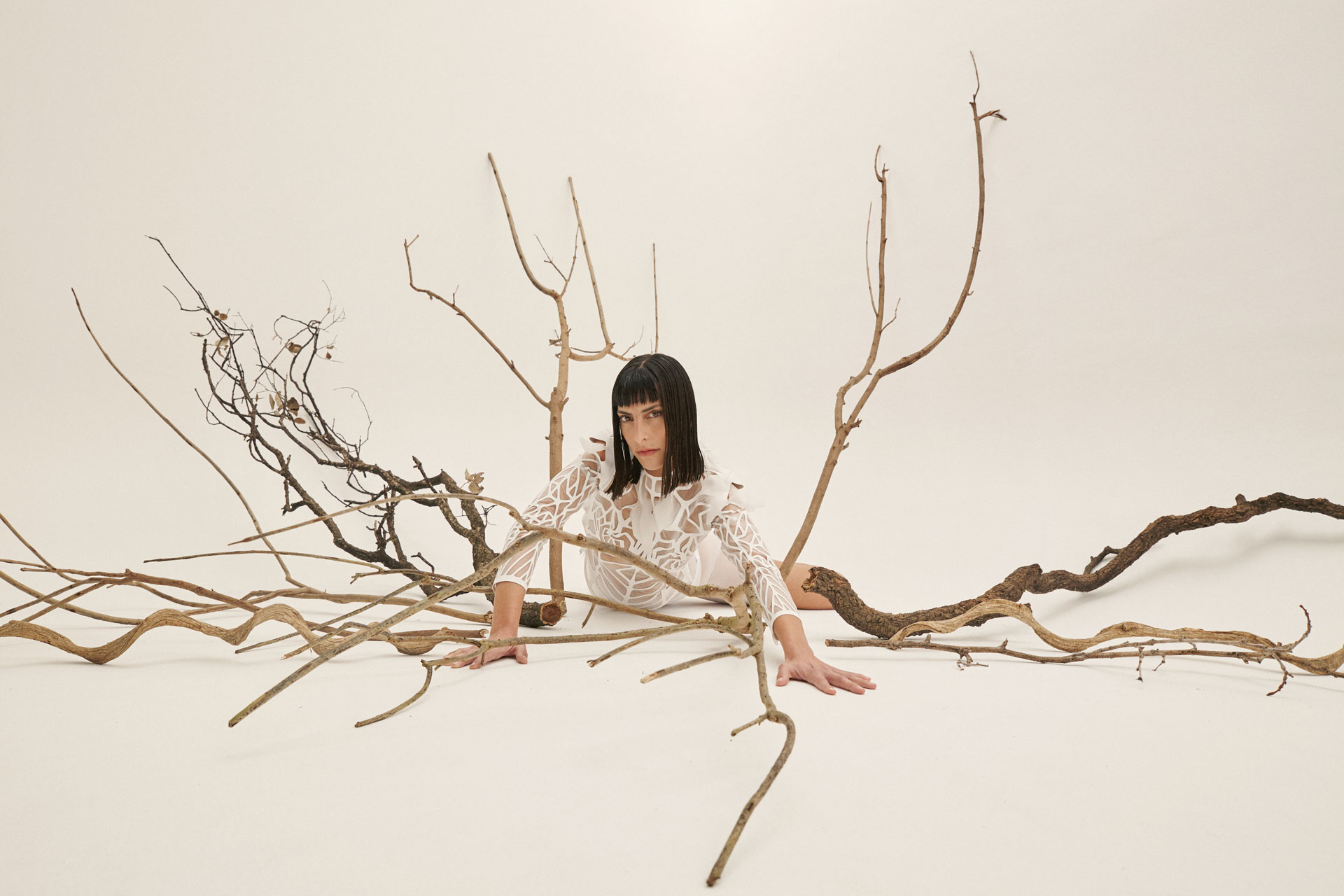 Moon Ribas, a performance artist and the first living cyborg woman, from 2007 to 2013 wore various devices that allowed her to perceive the colours of people, in the absence of faces, and a tachymeter glove that allowed her to perceive and measure the speed of all the people walking near her. In 2013 she found the courage to implant a sensor that could warn her of the arrival of seismic and earth tremors anywhere on the planet. Ribas, who is a choreographer, danced the first cybernetic choreography in history, dancing to the rhythm of the world’s earthquakes (Waiting for Earthquakes) and with a soundtrack based on the musical frequencies of earthquakes in specific places and times.

Neil Harbisson’s practice fits perfectly into a temporal framing of sensory overload and overstimulation by new experiential and medical devices that unfold a process of cyborg reinforcement of our bodies, that had began in the 1980s with practices of electrical extensions of the body by Stelarc, a famous Cypriot artist who turned his body into a sort of post-human robotic entity. 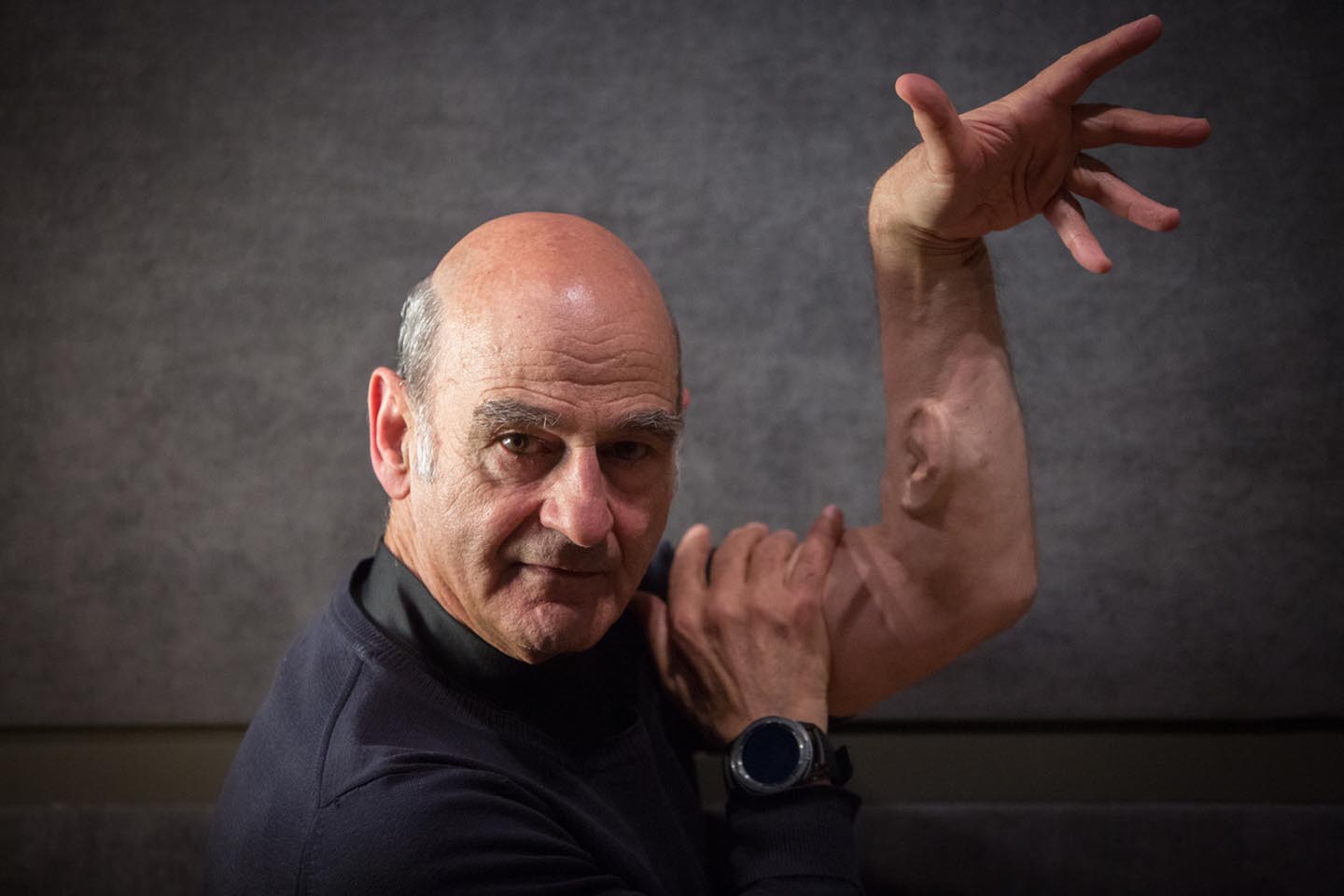 As forerunner of a process of body cyborgization, Stelarc in 2006 worked on the decolonisation of hearing, undergoing the implantation in his arm of a (third) ear, developed with his own stem cells, and redefining the concept of hearing and acoustic sensitivity, as an organ that could be placed on the skin, on the limbs and on parts of the body normally used for other purposes. The documentation of the surgery was disclosed to turn the cameras on the artist’s transforming body. “Ear on Arm” fits perfectly into the redefinition of the human body, which, according to the artist, has become obsolete in order to cope with the new rhythms and times of the economy, society and art. The prostheses the artist has created throughout his career and the grafts he has experimented with, reveal a parable of human time and a bio-political line, without which there can be no survival for the human being.
If her practice together with Orlan’s paved the way for major invasive experiments on their own bodies, she also began to examine how digital culture would affect the human condition and sensoriality. 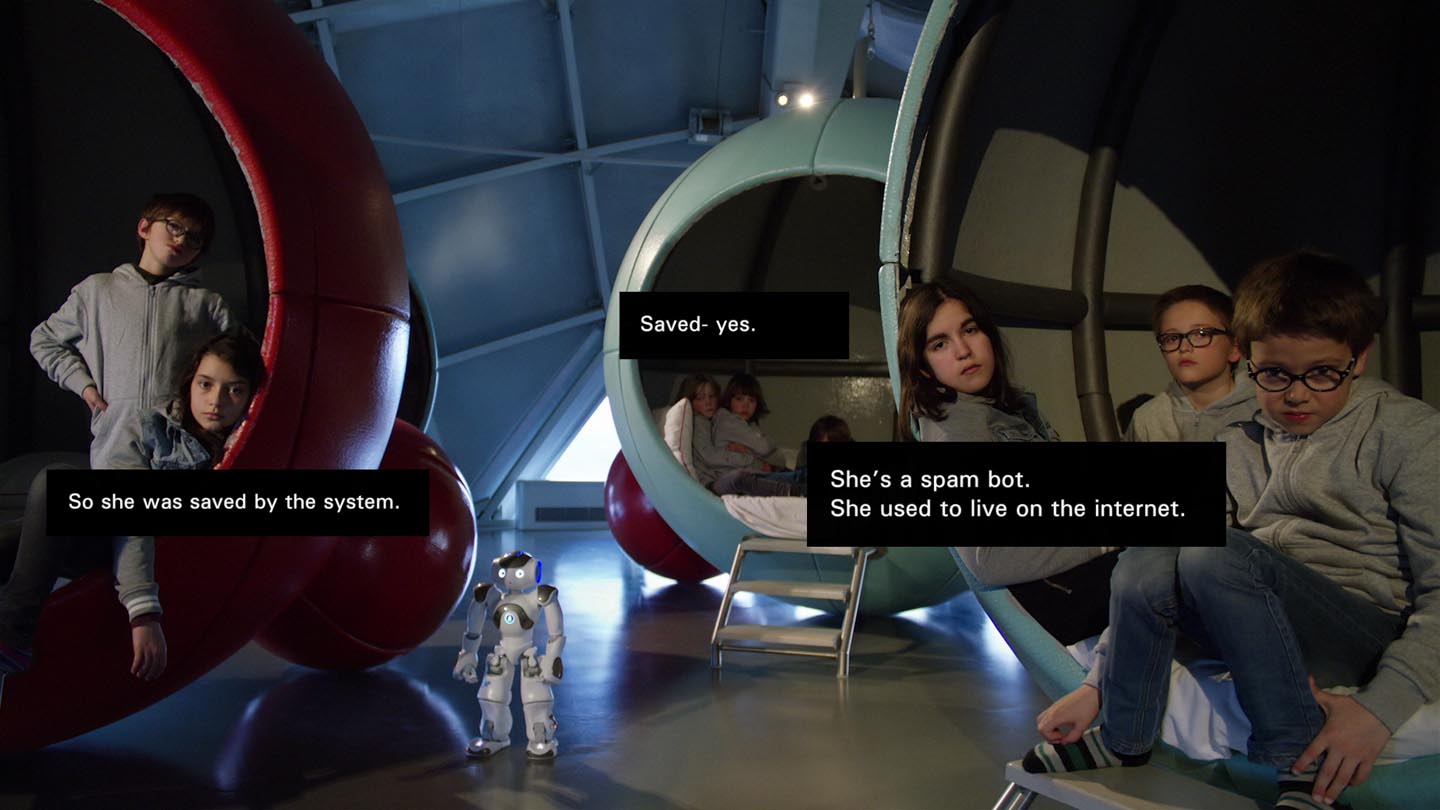 The image of Cécile B. Evans’ multiple ears floating on a dystopian pink lake represents the possible scenario of the dematerialization of our bodies and the rematerialization of our organs and senses in parallel worlds inhabited by synthesized human voices.
In the video installation “What the Heart Wants (2016)”, the ear, which travels free and multiplied, floating on desert plains, reminds us of the multiple microphones disseminated for audio surveillance, of the words multiplied by new devices, of the fragmentation and de-materialization of our bodies through the dissemination of our voices, asking us existential questions such as: what to listen to? Or how to listen? The Web is the place where data and emotions circulate the most, and the link between data and feelings is becoming stronger. The fragmentation of our bodies and organs means that our auditory organ, having access to information, visions, news, and rumours, has started a decolonisation of the categories of sound and noise, perhaps maturing the propensity to cross the boundaries within which acoustics is subject. As biomedical industries, scientific research institutions, and technology companies compete for access to the body’s goldmine of data, new legal and ethical questions are emerging about what constitutes the id, ego, and superego of the hybrid continuum of the human-non-human being. 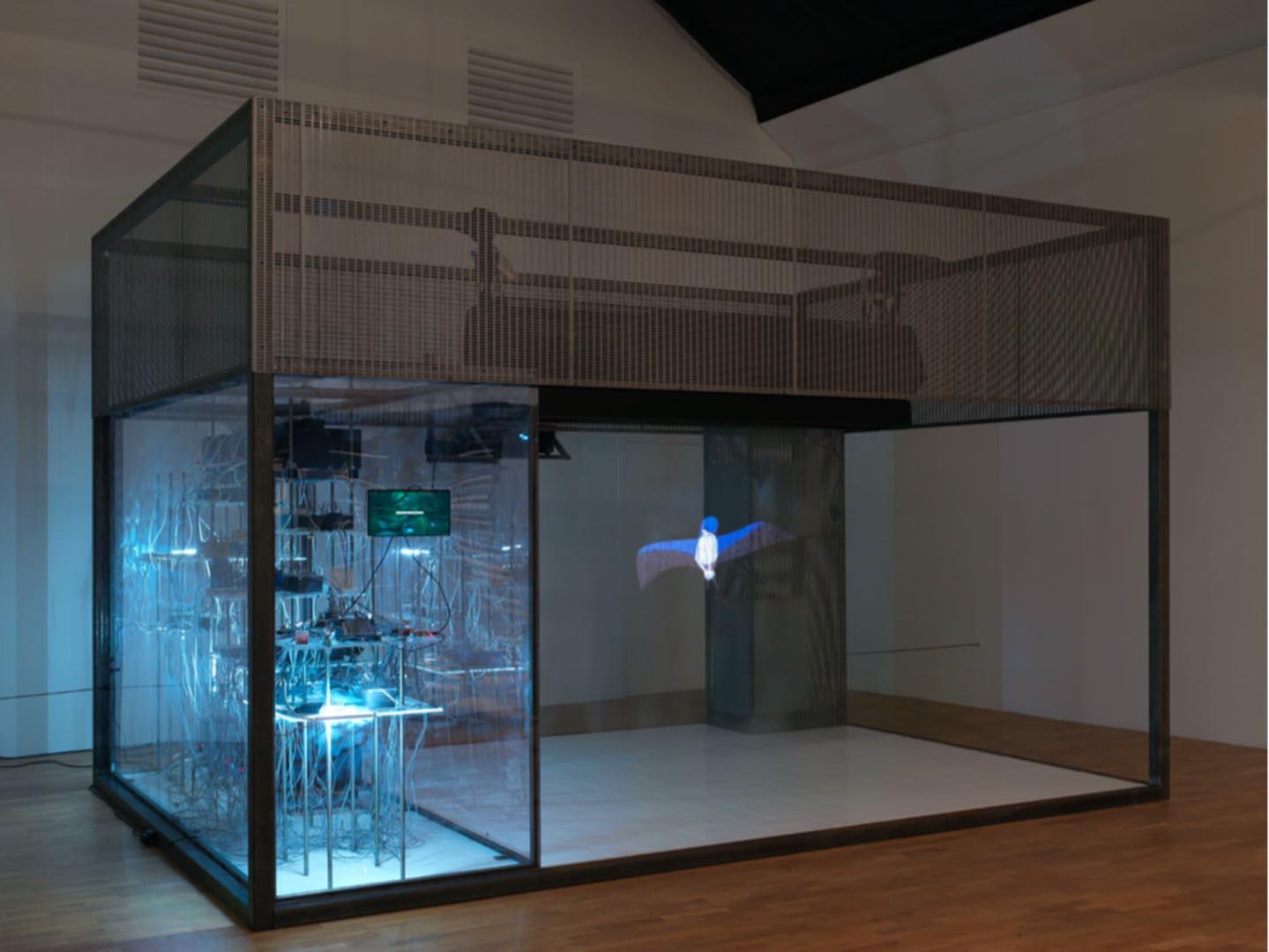 It is precisely the ethical questions related to the nature of the body in its immoral becoming – or in its aspiration or possibility of continuing to exist in other physical forms – that intrigue the artist. In her works she investigates the spatial and temporal limits of life at its most capitalist (“999 years, 13 sqm (the future belongs to ghosts)” – made in collaboration with architect and scientist Rachel Armstrong at the Whitechapel Gallery’s Is This Tomorrow? exhibition), or projects Hell and Purgatory into the virtual planes of messaging and audiovisual sharing services (Hyperlink or It Didn’t Happen, 2014). The final result of her works always appears very graceful and permeated by an existentialist spirit, set in a social phenomenology and in a current and futuristic aesthetic.
999 years is the maximum duration of contracts in the UK and 13 square metres is the size of the smallest living space in London. A spirit hovers in the cell of 999 years, 13 sqm, a space powered by organic batteries of micromes, activated by a bioreactor, as if to represent the infinite transformations organic matter can be subjected to or is subjected in the capitalist context, in order to extend its life and regenerate energetically in new, ever lighter and more incandescent forms. Will this be the fate human organic matter would encounter?

At the end of her enlightening essay Rosi Braidotti states: “I have no nostalgia for Man, the presumed measure of all things, or for the forms of knowledge and self-representation that accompany them. I welcome the multiple horizons unfolded by the collapse of Eurocentric and androcentric humanism. I interpret the post-human turning point as a happy opportunity to decide together who and what we want to become” (Rosi Braidotti: “The posthuman. Beyond the individual, beyond species, beyond death, from where the title of this essay is borrowed from).

Without falling back into para-anthropocentric forms of power, the evolution of the human species would seem both frightening and intriguing.

The Post Human. “Life beyond individual, species, death”is part of “Eternal Body. Human senses as a laboratory of power, between ecological crises and transhumanism”, curated by Elena Abbiatici. This rearch has been organised thanks to the support of the Italian Council (IX edition 2020), an international programme promoting Italian art under the auspices of the Directorate-General for Contemporary Creativity of the Ministry for Cultural Heritage and Activities and for Tourism.