Arshake is pleased to publish the fourth of  eight stages of Pasquale Polidori’s journey to Kassel on the occasion of Documenta 14, one of the world’s most important contemporary art events, which takes place every five years.

The servant lists, country by country, the master’s conquests. The master, however, does not even remember these, too busy being in love. Each time is the only time, according to him. But the servant keeps count of all these past times: the servant guards the catalogue, memory itself and the atlas of meanings.

It is not easy to understand, in this context, who is master; in other words, who is consumed by the pleasure of the work – allowing to be fully absorbed, each time, by each single artwork – absolutely, indefinitely, to the point of forgetting the overall map. Maybe the master does not even exists (and one thing is certain, the master is not the artist) because the possibility of pleasure, while forgetting criticism or not knowing the catalogue, does not exist. The one thing that is certain is that the servant, who struggles to update the map of knowledge and works here exhibited, meaning by meaning, the servant of language is the curator. And the servant is also the visitor equipped with the Maps and Information Booklet, responsible for their own knowledge of the aesthetic/political landscape and its mapping, which unfolds before them: invited to find one’s bearings alone, sometimes even manage by oneself given the lack of notes that penalises many of the exhibited works. (If one points this out, the answer is now a ‘refrain’ also found in some museums afflicted by feelings of curatorial guilt. “They want you to embark on your own path”, says the bookseller in Friedrichsplatz, disheartened, when I voice my surprise that there is no catalogue of ‘works’ and that the Daybook, the book that gathers together all artists’ records, does not include artists who are already dead, but who are exhibiting and therefore still semantically alive).

A series of words/concepts, therefore, can help us outline the key points (those that I have managed to humbly identify so far) of this rich landscape/catalogue.

(1) The first word is certainly score, in the musical and choreographic sense, but also in a more general sense of a linguistic or behavioural model to perform; writing; a design destined for interpretation; instructions and non-instructions. (2) Then the word body, adjectivised as befits a concept that, thanks to feminism, has almost 50 years of artistic life and philosophical reflection: political body; collective and parliamentary body; performative body; signifying/signified body; body/index; body/tool; body as conceptual anatomy; body in transit: between genres, from matter to language, from history to present and from life to death. (3) The centrality of the body is further reaffirmed by the presence of many artworks that are based on the mask, and it is, in fact, the very concept of mask that links various lines featured here: democracy and theatre; ritual, memory and communication; handicraft and cultural artefact; psychic subject and social subject; and the dialectics between ‘statue’ and ‘ritual mask’, which is at the centre of the Greek (but not exclusively) classics. (4) Then there is the word restitution, to be taken literally and metaphorically, or blown as glass, whose materiality is always the result of transparent forces. Restitution is not only a reference to the violent dispossession of the Jewish community at the hands of the Nazi-Fascists, but also the secular repression of cultural identity and negation of historical and political autonomy on which the hegemonic relationship between colonisers and colonised is based; and restitution also within domestic or civic rituals, of a mental, biographic, affective and narrative balance, and to war victims; restitution, finally, of the meanings due to twentieth century history, to avant-garde movements, to egalitarian and antifascist ideologies and to intellectual projects that have moved and formed individual lives. (5) Lastly, the word border and its synonyms: ‘frontier’, ‘fence’, ‘enclosure’, ‘house wall’, ‘wall’ and ‘line’. Mobilised in many works – video, sculpture and painting – the idea of border joins anthropology and architecture, geometric abstractionism and documentary photography, geopolitics and biopolitics. 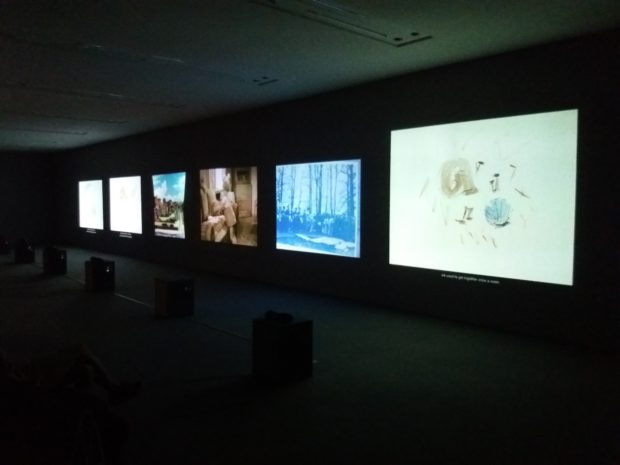 So: score, body, mask, restitution and border. A limited and small list that does not claim to exhaust all themes of such a labyrinth, featuring usual concepts that reflected in the mirror – and are now common currency of every thought declaring itself to be politically critical. But as the bookseller said: to each their own path.

A multimedia and multidisciplinary artist and philosopher and an experimenter with every medium (technological and otherwise) which might extend his aesthetic practise – centred particularly around language -, Polidori embarks on the narration of a journey that starts with his visit to the exhibition and continues in a more intimistic sphere, where he reflects on the universal themes that revolve around art as a whole, and around his own way of occupying space, of reaching audiences through institutional channels (or of being kept away from them).

Documenta 14, curated by Adam Szymczyk with a team of about 18 curators