Tom Tlalim continues his conversation on this project Tonotopia with Elena Giulia Abbiatici as part of her research“The Eternal Body. Human senses as a laboratory of power, between ecological crises and transhumanism”. (pt.I)

Elena Giulia Abbiatici: Can you describe the multi-video installation generated by the workshop at the V&A Museum? Does it make it possible to understand and reproduce the altered experience of the hearing-impaired ones?

Tom Tlalim: I was not interested in a didactic replication of what cochlear implants sound like or representing the object as a fetishised gadget. The issues emerging at the border between the human body and embodied sensory technologies are more extensive than that. I was more interested in how we listen. I was interested in creating a kind of deep listening within the V&A as an art institution, using its role as a cultural icon to enable an empowered conversation and open up access to the sonic experience of cochlear implant users and to the wider deaf and disabled community. I was about directing attention to the people involved, not as medical subjects but as people. It allowed them to tell their stories about how they hear and listen and what part sound plays in their lives. 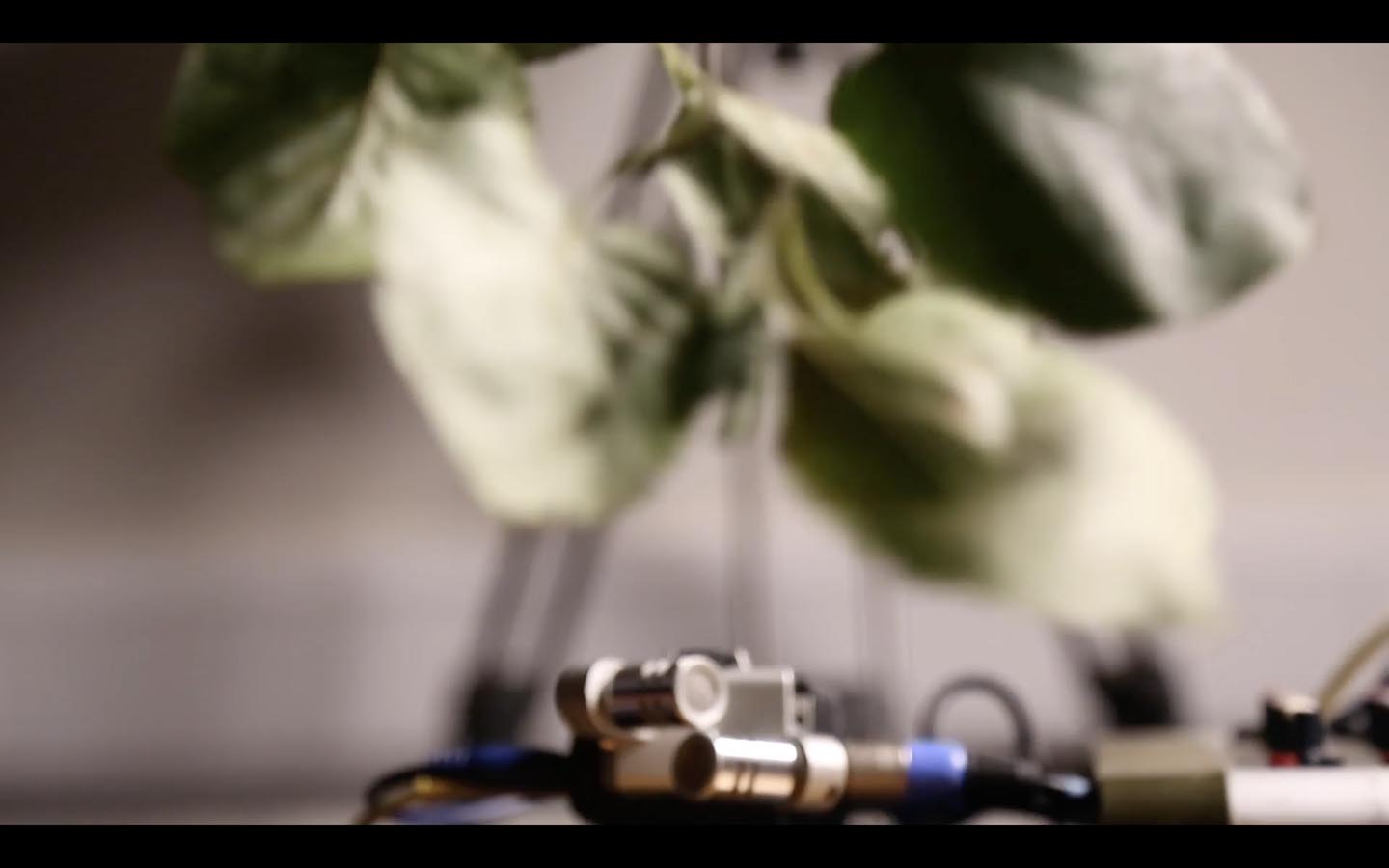 The mixing of sounds and the particular acoustics of the space became an essential part of the artistic process. The installation was shown as an arc of six screens, each displaying one interview. All interviews are closed captioned and accessible with headphones and iLoop devices, allowing direct connection to any hearing aid ‘T’ channel. Visitors could either listen in or watch and read the captions. The objects donated by participants were on display, alongside a video essay and sound collage, and an immersive Listening Shell sculpture that allows visitors to sit inside and sense abstract vibration textures and listen through an iLoop or speakers. Acoustic panels were integrated into the design, some printed with micro-photographic images of the cochlea. The sounds played in the space were carefully mixed and moderated to not overwhelm but rather appear and disappear.

During the filming stage, I worked with two photographers, Ariel Caine and Dror Shohet; we would set up a film studio at the V&A learning area each Friday, where we would meet with participants.

Each participant came twice for an hour-long interview, where I would try and keep things quite open and informal. I tried to listen and have an eye-level chat, but not to direct the conversation too much and flow with what the interviewees would bring in. The first interview would usually break the ice, and during the second, the discussions were usually more detailed, friendly and open.

Each participant was asked to bring in some sounds, music or objects that carry special meaning for their aural experience. These objects were discussed and recorded during the interviews to build up a lexicon of sounds for the exhibition. They often became the topics of their stories as well. 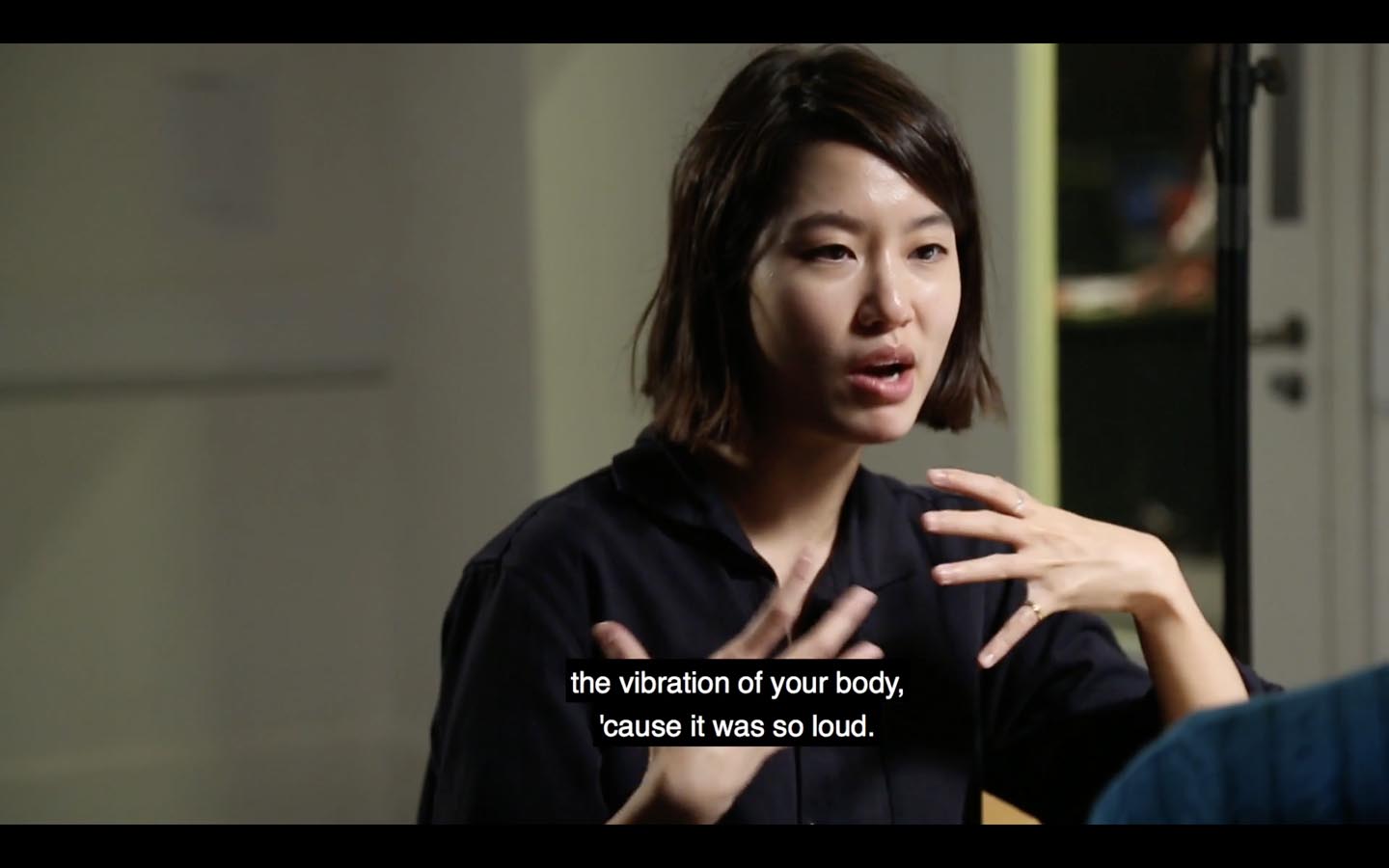 Did you consider the workshop itself a work of art conducted with the participants without a precise a-priori line of restitution or did you conduct the workshop in order to arrange the sound installation already conceived?

I find this one difficult to answer because workshops are often part of my artistic process and the curatorial work. I think it is relevant to consider how carefully we have to create inclusive spaces both during the workshops and in the realisation of the artwork. I want(ed) to make the work accessible to a polyphony of visitors. My spatial work is often sonic and visual, which requires balancing different sound sources. For CI users, separating streams is often tricky. We included the CI-friendly iLoop and a headphone set with each piece to connect and listen directly without interruption.

My approach to this installation involved plenty of work moderating sounds, reducing echoes, creating minimal compositions in the space, and replacing spoken text with closed captions. I did not want to give ‘hearing’ visitors any advantage here. The installation was sonic but equally visual and textural. As visitors read a text on closed-captioned video without hearing a voice or looking at a person signing, they are listening visually.

It wasn’t a situation where I could have a full free artistic licence because I needed to constantly listen and mediate between different experiences. There was a vital element of restraint in how the representation turned out at the end of the process. I suppose it became a kind of audible and visual polyphony, with stories, language and told experiences becoming the object of audition.

Because of the many access considerations and institutional limitations involved and work with communities, the curatorial process became part of the composition: the video composition was in response to the encounters. This was something I couldn’t predict before. 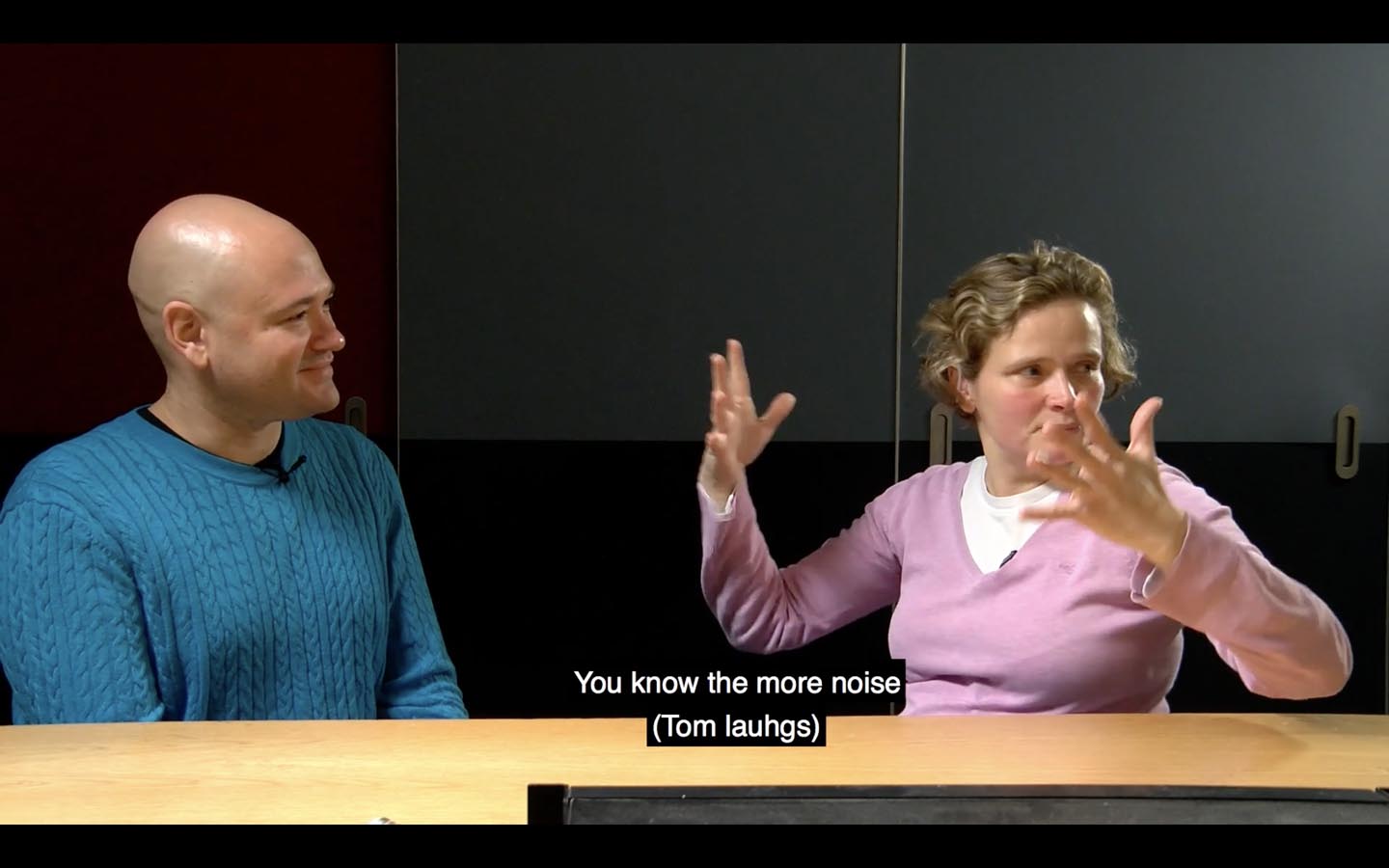 Does the issue of noise pollution come into your practice? What meaning do you attribute to it: a. possibility, b. cognitive overload, c. information noise, a limit to knowledge? d. communicative manipulation.

From a sensory technologies perspective and politically speaking, noise pollution would be communication noise – an interference or disturbance which has ecological consequences. But noise pollution has also become something we are used to and sometimes crave as a modern society because it masks some of the real issues at hand.

For example, one of the participants had no hearing at all for 8 weeks while he was healing from his implant operation. All he could hear was loud, menacing tinnitus, which is a kind of phantom sound. In this case, some noise would have been helpful because it would have masked the tinnitus: I think this is a fascinating example of our relationship with noise pollution. When I was co-curating the exhibition with the V&A team, moderating the amount of echo and noises in the space and creating an appropriate acoustical environment for CI listening was sometimes challenging because of the regulations and additional facilities needed. When curating sound art within such naturally noisy spaces, reducing polyphony became an essential element in creating inclusive spaces for hearing and listening. 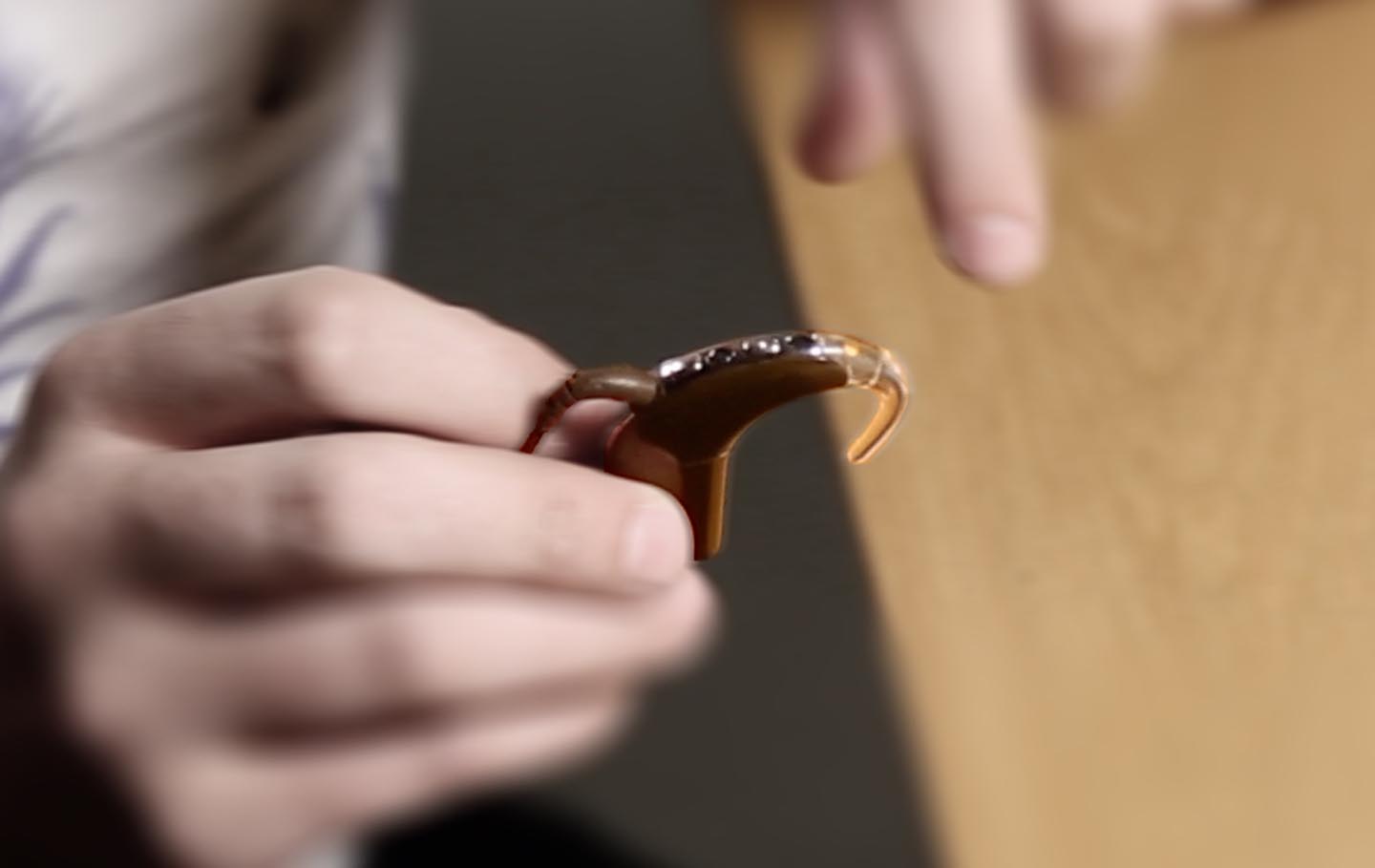 Tonotopia explores technologically extended hearing. The cochlear implant is one of the first examples of biotechnology applied to the sense of hearing. In the future there will be more and more digital hearing aids based on A. I. or mainly software-based hearing aids, demonstrating how technology can turn us into cyborg beings. If C.I. greatly reduces the perception of music and voice, how much margin for error/alteration could we imagine?

Typical current CI devices consist of digital and analogue electrical components, including microphones, microprocessors and electrode arrays. As such, they have perhaps not caught up with biotechnology just yet. But I think the future you mention is already here. One of the CI participants has discussed her newest software updates, including location and environment-aware noise processing algorithms and intelligent data processing complete with user apps, data licence agreements, etc.

It is probably early to say anything about any general-purpose AI, which may help with perception’s biological and neurological aspects. However, I do question what forms of subjectivity and effects on social structures, politics, and the environment will emerge from the increase in embodied integration and hybridisation of humans and technology. This questioning might become part of a future art project. 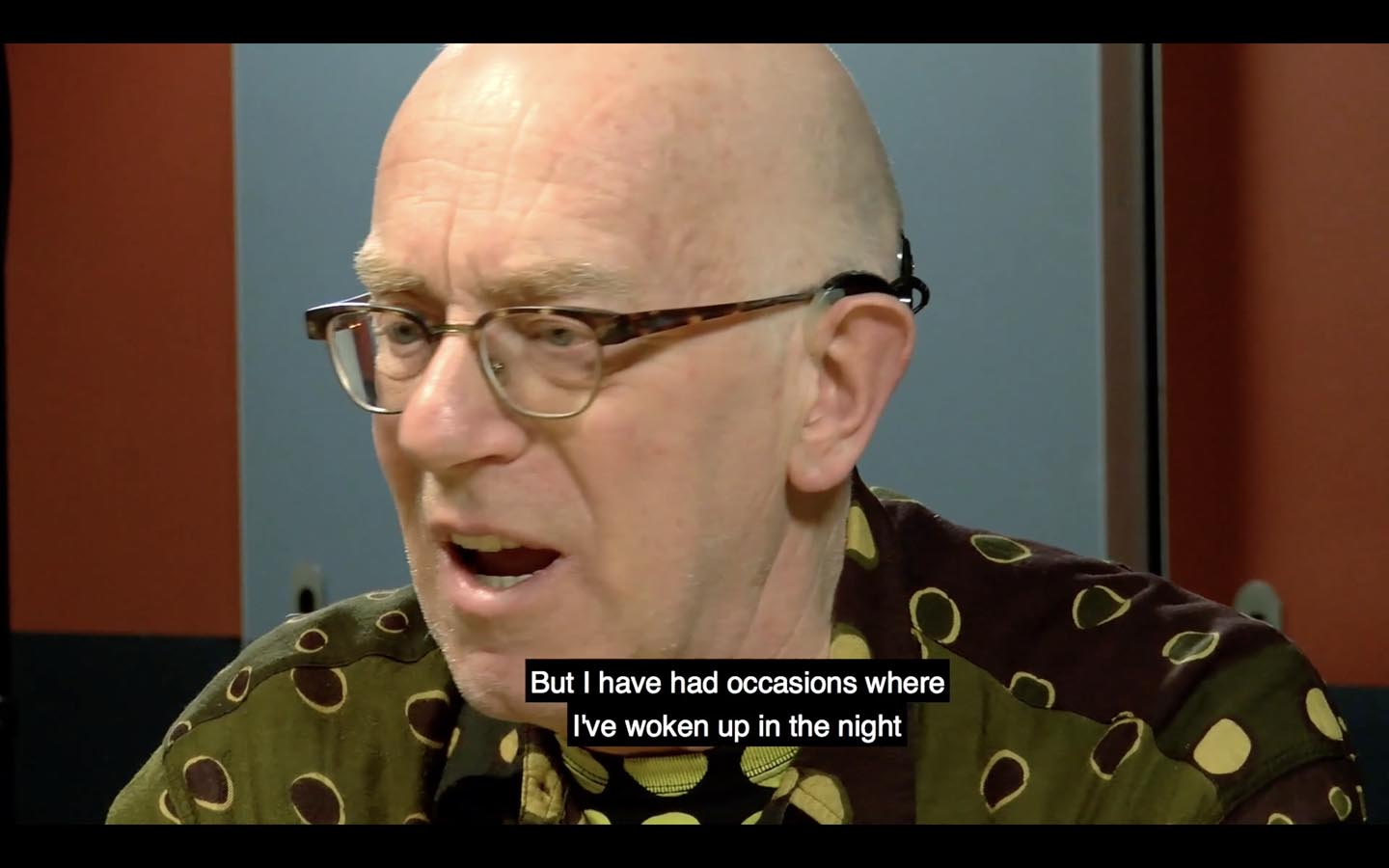 How much do you consider the concept of the future of hearing in your research? Do you know more about acoustic devices made of piezo nanofibers for the realisation of artificial cochlea?

Yes, I constantly explore the future (and present) of hearing and listening in my work. When I interviewed Ralph Holme, the Director of Research at the charity RNID, he seemed to regard CI as a transitional technology. He discussed innovative nano-biology and stem-cell therapies, which will enable new solutions in the future. But I also visited a UCL lab at the Royal Free hospital in London, where they were in the process of developing new, high-resolution self-powered Cochlear implant prototypes. This was a while ago, and I should probably follow up with them soon. They were developing many other implant technologies, including an artificial larynx to allow people who have lost their larynx to regain speech. 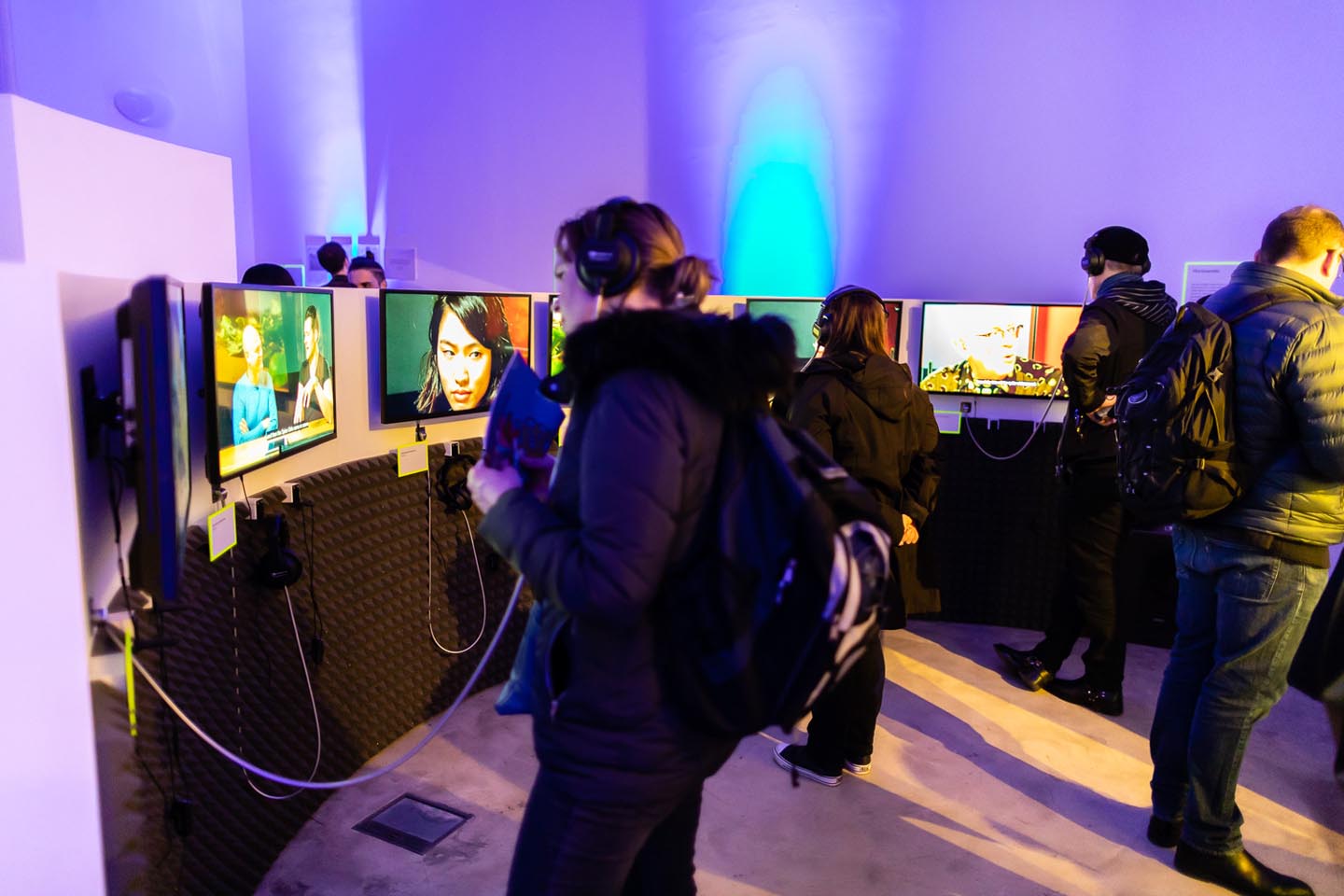 How differently robotic could the sense of hearing and voice be in the future, perhaps reflecting on acoustics in the metaverse?

The dilemmas posed by sensory enhancing technologies and sensory prosthetics are fascinating because they introduce a middle layer where perception can be manipulated. Empiricists have argued that knowledge emerges from sensory experience, but with the introduction of cloud computing and machine-learning into implanted sensory technology such as CI, hearing and listening become a cybernetic process. This raises many legal and ethical questions around where subjectivity lies and what kind of inter-dependence might emerge between the multitude of emergent agents of knowledge. Joanna Zylinska’ Minimal Ethics for the Anthropocene’ is very useful to read in this regard. Similarly, in my installation, you find yourself in a space that’s in between. We are increasingly finding ourselves within a society where intermediate sensory spaces and experiences are open for constant manipulation by learning algorithms, AI, and forms of surveillance. I am interested in what kind of politics, knowledge and subjectivities might emerge in this environment? Thinking of the spaces within our sensory systems as becoming mediated, it seems like the senses are becoming another productive/extractive space where subjectivity is (mass) produced.

Tom Tlalim is an artist, musician and writer whose work explores the relation between sound, technology, ideology subjectivity. His art practice explores sonic artefacts, voices and spaces as ideological devices. His PhD research at Goldsmiths, titled “The Sound System of the State”, was funded by the Mondrian Foundation for the Arts. He holds MAs in Composition and Sonology, and currently works as a Senior Lecturer at the University of Winchester. His work received numerous grants and awards and is exhibited internationally. Recent exhibitions include ‘Tonotopia’ and ‘The Future Starts Here’ at the V&A in London, ‘Forensic Architecture’ at The Venice Architecture Biennale (with Susan Schuppli), “Art in the age of Asymmetrical Warfare” at Witte de With, Rotterdam, “Hlysnan” at Casino Luxemburg, the Marrakech Biennale, and Stroom The Hague. His film “Field Notes for a Mine” was nominated for the Tiger award at the International Film Festival Rotterdam. His regular collaborations with the choreographer Arkadi Zaides are performed widely to a critical acclaim.

The interview to Tom Tatlim ”is part of “Eternal Body. Human senses as a laboratory of power, between ecological crises and transhumanism”, curated by Elena Abbiatici. This rearch has been organised thanks to the support of the Italian Council (IX edition 2020), an international programme promoting Italian art under the auspices of the Directorate-General for Contemporary Creativity of the Ministry for Cultural Heritage and Activities and for Tourism.