A virtual (ir)reality tour through digital artefacts, a project by and with Giacomo Lilliù and Lapis Niger for Residenze Digitali

WOE – Wastage of Events, a live digital performance created by Giacomo Lilliù and Lapis Niger for Residenze Digitali, combines a theatrical and digital experience in a video-ludic setting that takes centre stage through the superimposition of real-time vocal, written and visual interventions.

This is the first time that Lilliù and Lapis Niger have united their different professions on the digital stage – theatre (Giacomo Lilliù) and designer and writer (Lapis Niger). The idea for WOE – Wastage of Events had a long incubation period in the exchange between the two artists, with the intention of experimenting with a performance inspired by the avant-garde approach of The Cage, Martin Vaughn-James’ graphic novel from the 1970s, combining his technique of non-storytelling through images with that of real-time drawing in concert, already consolidated by the musical duo Uochi Toki, which Lapis Niger is part of as NAPO.

We prepare ourselves for the tour. Everything revolves around the subject of digital memory, the criteria for producing and selecting data, the logic of data storage and processing, and capacity.

“How much data, useful or useless, is generated by the daily use of a terminal? How many strings of code are stored with no purpose? How many overwrites can digital memory sustain before fragmenting? And what about psychic memory?” These are the questions asked by the two artists, used as “coordinates of the tour through ruined polygonal places.” 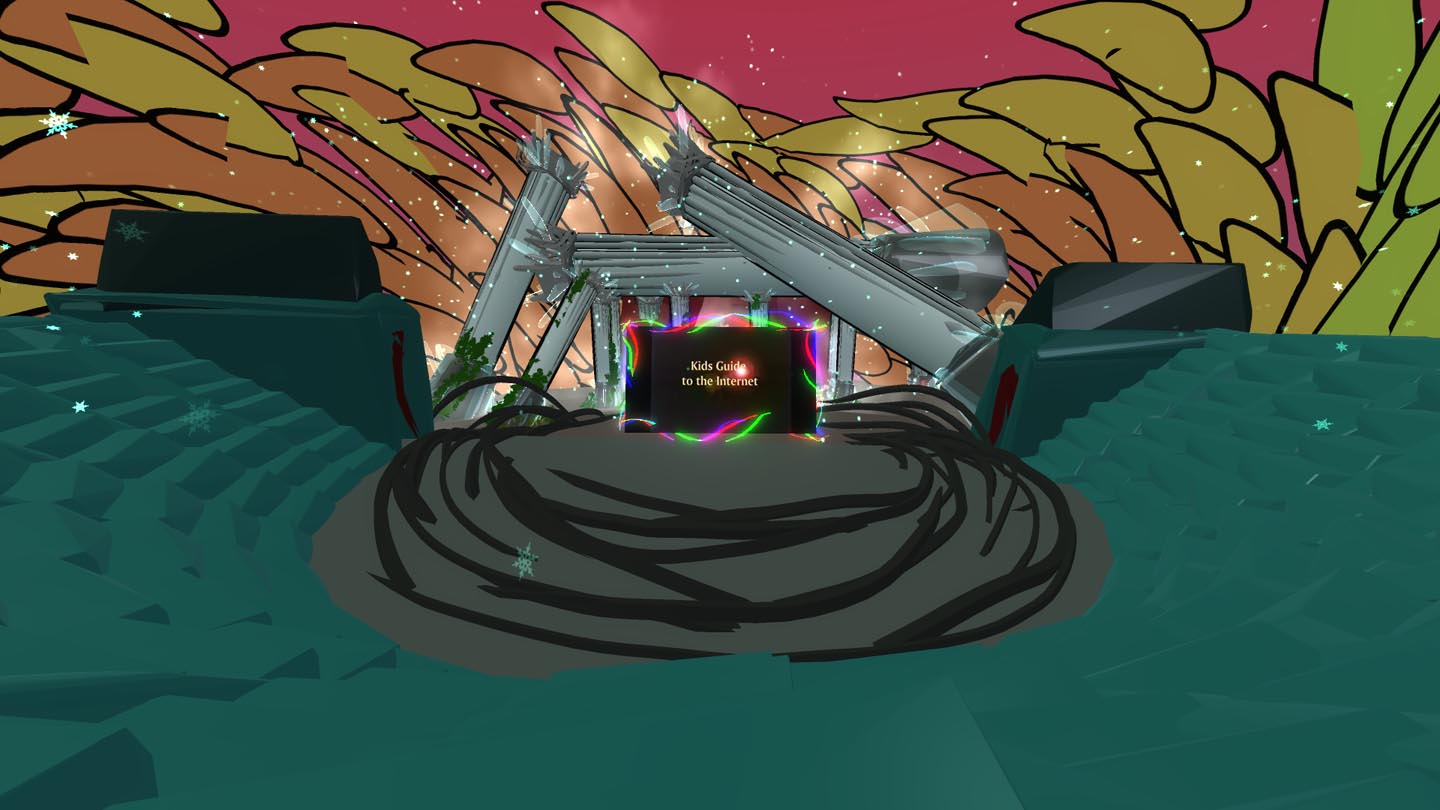 The performance takes place on Twith, Amazon’s platform for streaming video games, and moves within WOE’s virtual reality, which opens up to a video-ludic desert landscape where elements of urban life appear, as well as ruins of the digital world, USBs and posters of floppies – all relics destined for future memory which already appear as “ancient”.

The scenography, dramatic elements and visual performance generate a path that is not necessarily linear and includes a set of literary, cinematographic, musical and video-ludic references generated through the two artists’ area of common interest.

Lapis Niger modifies the landscape before the eyes of the user. The voice (Lilliù’s) unleashes a narration that is out of synch with the whole scenographic apparatus, until the description of numbered files that open their contents in sounds and images make it gradually clearer that our tour is a journey through the landscape of digital memory. This memory struggles to contain itself as a large amount of data, much of it useless, resists obsolescence.

On the Twitcher platform, interventions via chat play an important role. In the performance, they turn into a real game of contamination between performer and users when the two artists improvise, selecting some comments, making them their own, reciting and modifying them with their voices.

The narrative continues. Anxiety increases along with the tone of the narrator’s voice when he describes the corrupted file and subsides when he talks about the “truce” between terminal and user.

The virtual (ir)reality tour comes to an end.

On Twitch the streaming performances are available on the page, in the summary section, for about 30 days. Whatever the outcome, we are not sure what will remain of all this in the digital memory. We certainly have some references, which have already bounced around the web. The reflections triggered by this journey through digital ruins within its memory continue in the platform’s function itself, which only stores its live performances for 30 days, as well as by the way in which Residenze Digitali has decided to treat live performances, i.e. not allowing them to “float” online following live performance but keeping them safe as precious artefacts in the analogue space, in the same way as memories of theatrical performances are stored. New forms of the virtual (ir)reality tour will probably be found in the reinterpretations that the two artists are already discussing for a version in physical space.