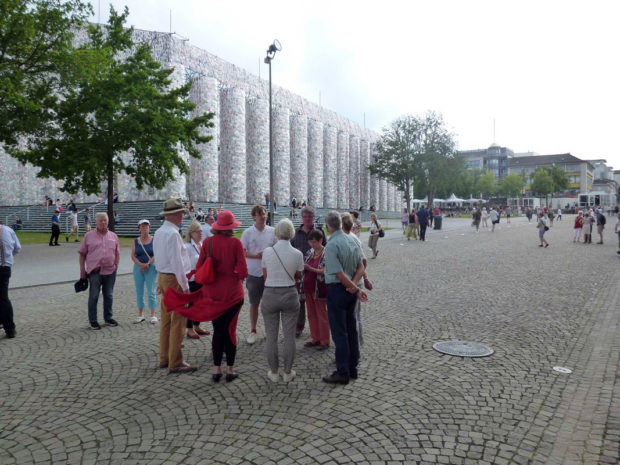 Pasquale Polidori’s journey at Documenta 14, now on show at Kassel, continues with a reflection on  the curatorial politics where to include guided tours, mediators between the works and visitors, for this edition invested with the role of Chorus.

We leave home after lunch. On the way to Kassel there are fifty kilometres of woods, open countryside and little villages; there’s very little traffic, as ever, and the journey gives us a relaxing view of the most extraordinary variations of green imaginable, in a summer landscape refreshed by frequent rain and where the temperature has fallen to 12 degrees in the past few days. But today’s a lovely sunny day, a Friday in July, and summer is everywhere: the cows idle in the meadows, the boats on the sparkling Weser, scantily-clad tourists on bicycles or on foot, the sky – clear for the moment – with just a few clouds getting ready for the next shower. The picture-postcard views continue until we arrive in the city. 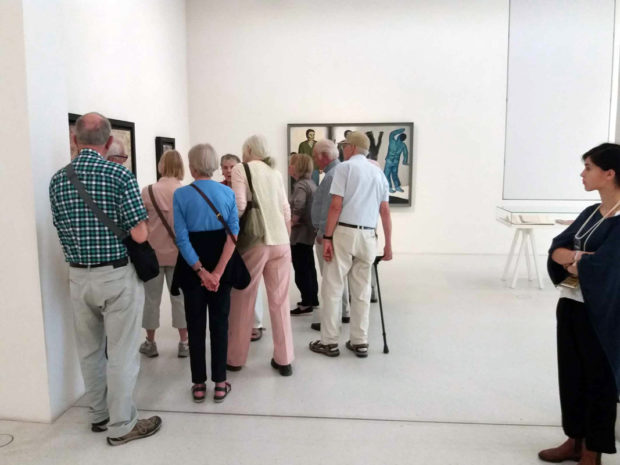 A convenient car park right in the centre, next to the Municipal Theatre; no hassle, here the cars are well-mannered: this opulent and industrious city – originally Baroque and later Neoclassical – was razed to the ground in 1943 and rebuilt with rational and car-friendly modernity in the age of a gradual and (still, for many) traumatic economic, cultural and democratic recovery. An entire section of documenta 14 in the Neue Galerie is in fact dedicated to the cultural milieu that led Kassel to become the documenta city, and thus to give rise to the first powerful critical and civic redefinition of art in Germany through this exhibition programme; posing – even back in 1955 – a question which today we might call a curatorial policy. 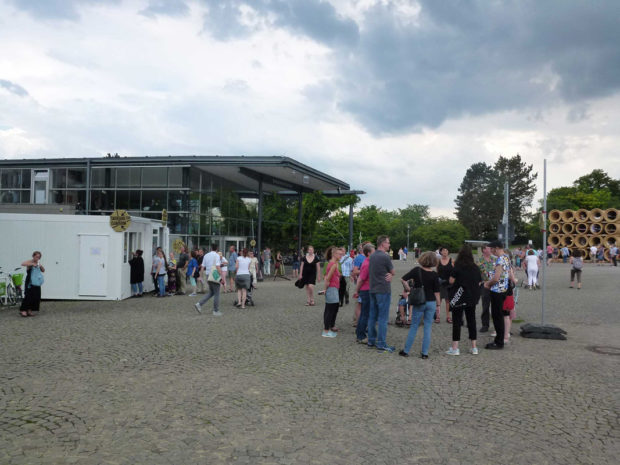 Arnold Bode, painter and mayor of the city; Fritz Winter, a pupil of Klee, Kandinsky and Albers, founder of the collective Zen 49 (Abstract, Informale); Lucius Burckardt, professor of sociology at the faculty of architecture in Kassel and a student of landscape; and an exercise book in a display case, dense with hasty, uncorrected writing (German Diary #2, 1936), reminds us that Samuel Beckett came often to Kassel in the 1920s and 30s, and met his first love here: Peggy Sinclair, the daughter of an Irish art dealer who had moved to the city to follow the artists of the German avant-garde; the 1928 portrait of Peggy was actually painted by Karl Leyhausen, Bode’s contemporary and fellow member of the Kassel Secession, who committed suicide in 1931, before the ‘barbaric time’. 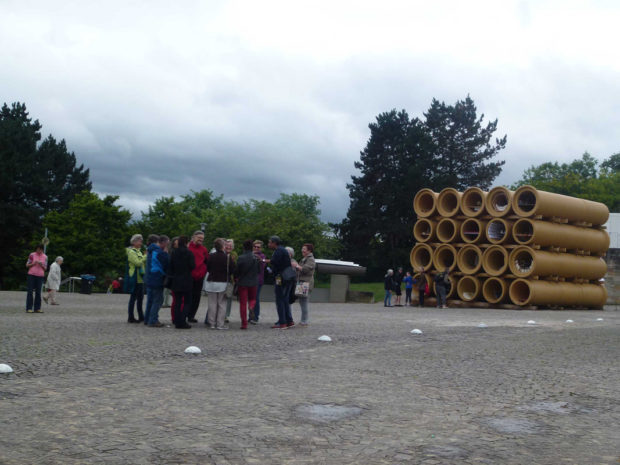 When we come out of the car park onto Friedrichsplatz, the scene in front of us is of a buzzing mass of humans intent on culture in their weekend free time: in the large rectangle of the square – whose shape on paper is more distinct and regular than on the ground – hundreds of people move back and forth between the Fredericianum and the Documenta Halle; queueing at the cloakroom, where security regulations dictate they must leave bags and backpacks; crowding round the entrances to the exhibition venues; exchanging greetings and information at the traffic lights in Frankfurter Strasse, the artery that bisects and disrupts the square; resting on the steps of the Parthenon of Books (Marta Minujin), which is still being built, with workers on cranes still covering the impressive iron-framed pillars with books; browsing through catalogues and consulting maps; gathering in circles around guides… The guided tours of documenta 14 are called Chorus Walks and form part of the programme dubbed Aneducation. 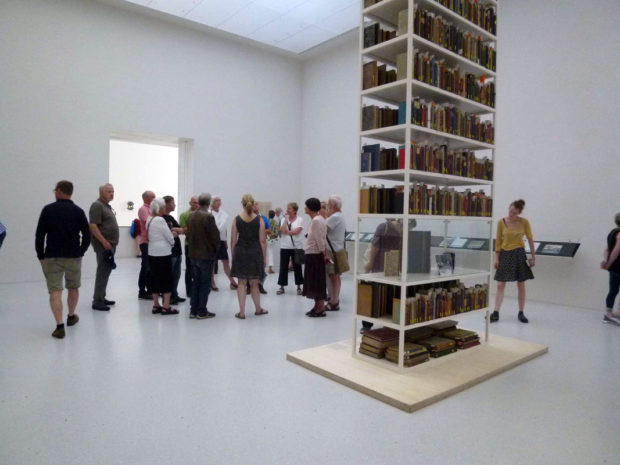 In the obsessive attempt to rechristen and “re-signify” every part of the exhibition, even the guides are invested with a new role, that of the Chorus in classical tragedy, in other words as intermediaries between actors and audience, pricking consciences, provoking discussion, questioning the characters (in this case, the works on display) and demanding an account of their action. What an extraordinary image of the relationship between the individual who looks, the artwork that acts and the mediator who speaks! But the work of the chorus will only have achieved its aim when the verbs have been swapped and re-swapped: so the individual who speaks, artwork that looks and mediator who acts, or individual who acts, artwork that speaks and mediator who looks. The meaning of the Chorus’ guided and participatory tours lies in this exchange of looks, words and actions. And watching them speak and listen to each other for minutes at a time, standing in circles of 15 people maximum, before even entering the museum, conveys a sense of curiosity (who knows what they’re talking about…) and of confidence in the fate of art and exhibition strategies…

A multimedia and multidisciplinary artist and philosopher and an experimenter with every medium (technological and otherwise) which might extend his aesthetic practise – centred particularly around language -, Polidori embarks on the narration of a journey that starts with his visit to the exhibition and continues in a more intimistic sphere, where he reflects on the universal themes that revolve around art as a whole, and around his own way of occupying space, of reaching audiences through institutional channels (or of being kept away from them).

Documenta 14 – Get to Work, You Talkers! (A Perfect Afternoon) pt 2

Documenta 14 - Get to Work, You Talkers! (A Perfect Afternoon) pt 2