Documenta 14 – Get to Work, You Talkers! (A Perfect Afternoon) pt 2

Pasquale Polidori continues his in depth visit at Documenta 14, now currently on show in Kassel, guiding us in the exhibition hosted at the Stadtmuseum, one of the venues of an event more and more widespread in the urban territory.

…Observing the visitors in the square and enjoying a calm walk is not an excuse to shirk the responsibility of our cultural work. The fact is, we’re in no hurry. We’ve already been here other times; this is not the first visit. We were confused and anxious the first day, too when our many attempts to understand failed and we had no sense of the itinerary. We were like crazy bees who couldn’t find their way back to the hive. Things are different now. We are walking along with confidence because we don’t feel like there is a secret out there to figure out. After three weeks, we have a good idea of how to get around. So, we’re happy even if we’re just wandering around a little bored. We’re happy that we don’t owe anything to this theatre and we can get about without any sense of embarrassment or shame. I’m just saying that the part of us that still can’t grasp what’s going on resists the thorough explanations of the Chorus and Team of curators. And we almost like that. We’re practically proud of that because we’re not interested in understanding every last detail.

We’re on our way to one place we haven’t visited yet: the Stadtmuseum. The city museum is hosting six of documenta 14’s works. A small group that, given the site, develops the theme of citizenship and life in the city.

As luck would have it, the first work we see is a video by Anna Daucikova, Thirty-three Situations (2015, running time: 108 minutes). We walk into the hall. There aren’t many chairs and only two other visitors who keep us company for a bit before going elsewhere. We are left alone to concentrate on the slow and mesmerizing sequence of faces, photographs, household items and typewritten pages stuck to the windows of a home – revealing brief and schematic stories of the people observed in the streets, at customs, in aeroplanes, worksites and daily life in Russia. The Slovakian visual artist Daucikova lived there in the 1980s. She was involved in a homosexual relationship that led her to make the move to this country and was forced to keep the relationship secret. She spent time with artists and dissidents while developing a sensitive eye towards surveillance and details of human behaviour. The delicate concision of the writing is reminiscent of Raymond Carver, cut into pieces and revived, outside of the literary world, to be placed in a detective story that carefully chronicles the social dynamics regarding sexuality – especially female homosexuality. We stay about 30 minutes and leave with the intention of returning later in the week. 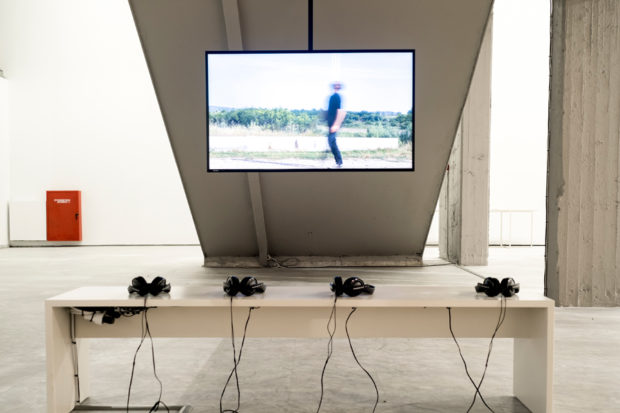 We are captivated by another video (Hiwa K, View from Above, 2017) where a voice tells us the story of an Iraqi political refugee while the images on the screen are close-up and ambiguous. They are of the scale model of Kassel following the 1943 bombing preserved in the next room. We also dedicate the appropriate attention to a fascinating work by Peter Friedl entitled Report (2016). This video documents actors rehearsing Kafka’s A Report to an Academy. A healthy instinct protects our personal and distinct sense of melancholy conveyed by Daucikova and it sways us from both Andreas Angelikadis’ aggressive analysis of speculation in the construction industry of Athens and Regina Jose Galindo’s unbearable fetishism for weapons. But there is no avoiding the hall featuring Hans Eijkelboom’s astonishing reportage of on the variations and constants, thousands of “human guys” photographed on city streets. Then it’s time to go. There is an experience waiting for us that would end up being extraordinary, the performance of Phia Menard at the Henschel-Hallen, a former metallurgical factory in the outskirts of Kassel. 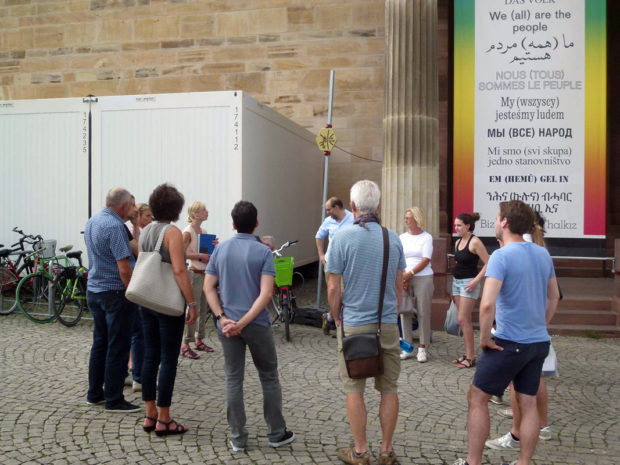 The address we have corresponds to a locked door. So, that is unconvincing. We start looking for the real-place along with other bewildered visitors, exchanging remarks about the painful (and undemocratic) ambiguity of the directions which seem to afflict this edition of the documenta. After a walk around the immense block, we finally stumble upon the entrance: a road that reveals a fascinating, abandoned building: industrial ruins surrounded by old iron and tall, thriving weeds…

A multimedia and multidisciplinary artist and philosopher and an experimenter with every medium (technological and otherwise) which might extend his aesthetic practise – centred particularly around language -, Pasquale Polidori embarks on the narration of a journey that starts with his visit to the exhibition and continues in a more intimistic sphere, where he reflects on the universal themes that revolve around art as a whole, and around his own way of occupying space, of reaching audiences through institutional channels (or of being kept away from them).

Documenta 14, curated by Adam Szymczyk with a team of about 18 curators

Get to Work, You Talkers! (A perfect afternoon). The End

Get to Work, You Talkers! (A perfect afternoon). The End