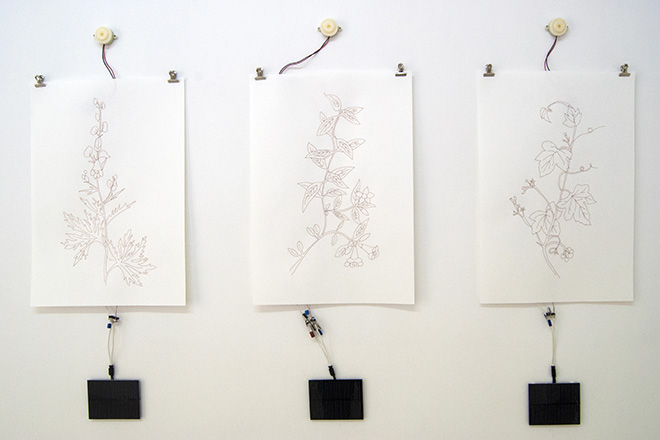 Today, the last of eight appointments with the critic reflection by Antonello Tolve who retraces the complex relationship between art, technology and nature, by surveying a number of artworks connected to the relation man/environment, from Land Art to Transgenetic Art to Bio Activism.

The prolific multiplication of urban green areas dedicated to flower meadows, like those bio-rococo plantations crowding Istanbul motorways; the hanging garden patches behind advertising billboards lining the streets, a great deal of them planted to reduce carbon emissions: things like these have led today to a new awareness, new safety measures, and new aesthetic phenomena shaping the “trend of vertical gardens” or “the trend of secret gardens that, according to American Guerrilla Gardening’s motto ‘Free the gardener in you!’, are born to beautify the world through a sort of urban reforestation.”[1] Also ­­–­ left aside that fashionable green thinking that “has extensively disseminated the idea of the community gardens, jardins partagés” and of “trendy, radical-chic orti urbani”[2] ­– they have yielded some hopeful results in aesthetic as well as environmental terms. In the same quintessentially ecologic wake are some works by artists like Ettore Favini that, during the second edition of the Premio Artegiovane (2006) at Cascina Falchera, Centro per l’Educazione all’Agricoltura, near Turin, proposed Verdecuratoda [GreenNursedBy], a garden with Piedmontese fruit trees; or the caring gestures of Bianco-Valente that in 2011, in a town near Alessandria called Voltaggio, for the project Senso orario [Clockwise] curated by Valentina Tanni, together with the locals planted a mulberry sapling, as if they were giving birth to a collective action, or celebrating a festival, or reminding that taking care of nature means to take care of a place and its inhabitants. 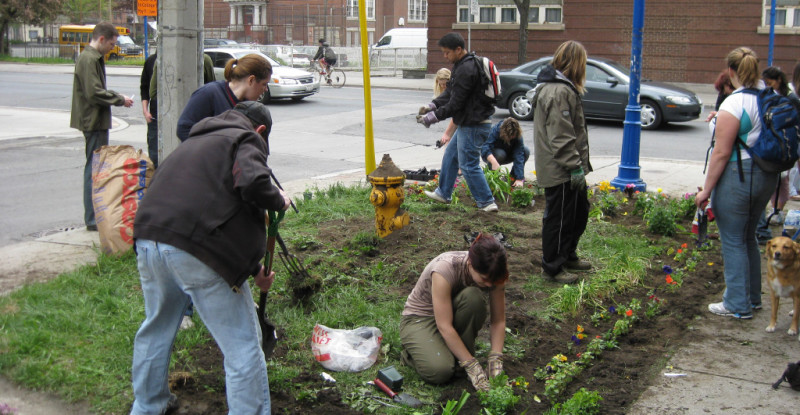 Other projects have a more exquisitely conceptual origin that hints at the threats posed by a given situation and sets itself as an emergency solution in order to awaken the public opinion and invite people to consider issues of common concern. In the ambit of art, these other projects are characterized by the desire of shifting the focus away from an actual action in order to privilege an imaginative one, which can expand the vision on the political, economic, and social fields. In so doing, it invites the viewer to look at her own habitat with a para-ecologic awareness, triggered by the idea underlying a given work and its meaning. 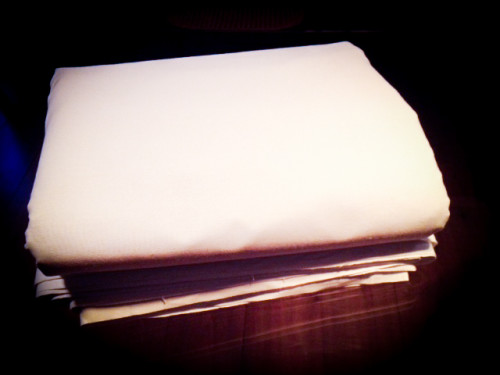 Using a 2,17 x 11 m carefully ironed and folded off-white cloth – like those typically employed for burials – with his Shroud 2,17x11m (2014), Devrim Kadirbeyoğlu calls the attention on issues related to public green areas and ecology as a reminder of the facts of Gezi Parkı (in square Taksim, in the Beyoğlu district), the only green area in town that risks to be demolished to be replaced by a brand-new mall. Shroud 2,17x11m symbolizes charity, knowledge, and prayer; a symbol through which the artist wishes to recall the sudarium, the shroud useful to wrap up the green area, the tree harmed by the mad bestiality of rampant overdevelopment ­­– to envelop, bandage, heal, cure an inconsolable grief.[3]

With Here and Nowhere (2013-2014), the artist makes similar reflections in order to envisage a landscape that develops according to some specific coordinates connected to environmental and socio-cultural factors. Stemming from the novel Saatleri Ayarlama Enstitüsü (1961) by Ahmet Hamdi Tanpınar, Here and Nowhere is an installation transforming space into an ‘integral work of art’ and urges the viewer to reckon with the time spent in daily occupations marked by interactive phenomena, by the forced nomadism of contemporary man, by the preoccupations about having a home, a place where to shelter. Departing from the image of a snail – a wandering, solitary, animal with no fixed abode, carrying its own house, and whose trail symbolizes a ‘natural’ journey juxtaposed to mankind’s ‘artificial’ one ­– Devrim Kadirbeyoğlu ironically reflects on a world controlled by new economic dynamics that reduce and ‘shrivel up’ the spatial-temporal dimension, taking the individual to a pyknoleptic and ubiquitous scenario.

Along with the installation, the artist envisaged a workshop to make a ‘phono-iconic’ installation out of an educational program. In so doing, he created a plural exhibition corpus: on the one hand, all the drawings realized during classes are exhibited in a special arrangement at the reach of children; on the other hand, thanks to a sound-track recorded in class and faithfully reproducing the time spent there, this work also appropriates the surrounding space as its plastic and accessible component that sets the viewers free and makes the sculpture a human activity in progress.[4] 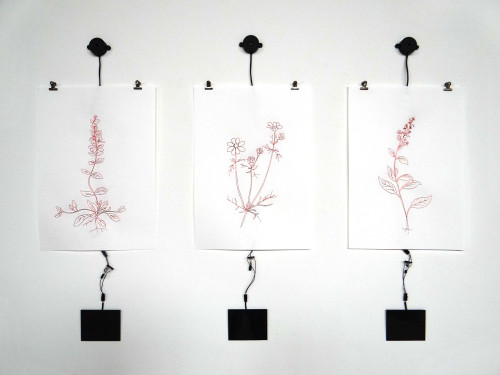 Born under the great star of ecosustainability and of a discourse imitating the biological model, Cuprum (2012), a sound installation by Daniela Di Maro, joins together representation and energy conduction through five copper wires on paper embroideries portraying medical herbs and a number of technological apparatuses (solar panels, microcircuits, sound speakers) transforming the space by the emission of natural sounds. In the artist’s mind, Cuprum – the name Pliny gave to copper because of its connection with the island of Cyprus – is an endangered place; an optimistic glimpse on environmental resources; a multisensory tour inviting the viewer to a series of magical worlds where nature rhymes with cure.

From a more analytical position, Domenico Antonio Mancini with Avviso ai naviganti [Notice to Mariners] (2013-2014) and the project Protocol (2014-2015), reflects on some current unresolved problems. If, on the one hand, with Avviso ai naviganti he proposes an aesthetic vision of “the Mediterranean Sea and the migration flows to Europe, a mapping of all Mediterranean coasts along with the data recording the disasters occurred to the migrants in the selected areas, from the coasts of Turkey to the Canary Islands that, although not exactly belonging in the Mediterranean, have always been one of Europe’s gateways”.[5] On the other hand, with Protocol Mancini looks into the abyss to focus his attention on those ‘non-returnable’ ships turning the Mediterranean splendor into an unrestrained dump. This work has its roots in the 1972 London Convention on the prevention of marine pollution by dumping of wastes and other matter and designs a disquieting scenario on “ships that between the 1980s and 1990s have sunk, or have often been intentionally sunk, going down to the most profound depths of the Mediterranean Sea together with their loads, at times unknown, at times explicitly toxic”.[6] 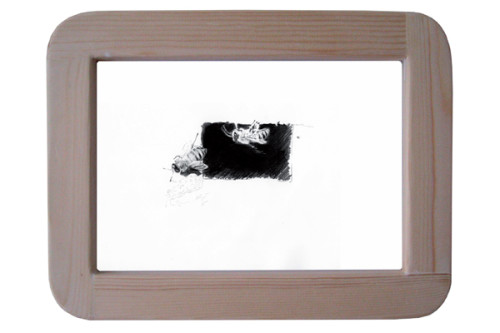 Marco Maria Giuseppe Scifo’s works develop the artist’s thought through sharp and disarming metaphors, envisaging scenarios that show a world that mankind has looted, destroyed, or simply ignored. Not unlike Di Maro, Kadirbeyoğlu, and Mancini, Scifo opts for an analytical attitude, but in a more discreet fashion. His is an attitude open to meditation, where daily life is visually disassembled and collected in a primer where environmental disasters, light and acoustic pollution, the melting of glaciers, poisoning weed-killer, gases and particulates polluting the air, overbuilding and deforestation, the lack of control and (at least) of collective ethics become essential matters. They also become the central themes of new projects, such as Peace (2005), 8 sec b-n (2005), Apicoltura [Beekeeping] (2006-2009), and ex-térieur-in (2009-2010). They do not provide remedies, antidotes, or potential therapies, but rather tell stories and propose themselves as ramifications of thoughts besieging the viewer’s mind, inviting her to formulate new ideas and take new stances.

For the artists working more ‘metonimically’ and metaphorically, the attempt to hint at certain themes, perform in depth analyses, and tell about their results by formulating ideas that express (but not expose), appeals to the public’s and the viewers’ minds: not to solicit a critical opinion but rather, as pointed out by Paolo Bellini, “an enjoyment that can, in turn, bring about new situations”.[7] For these artists, it is essential to beat an alternative path, to humiliate the arid repetitions of daily life, and pick the viewer’s eye with the pin of creativity, of an atmosphere rejecting sterile malice, pushing beyond the brim of empty and frivolous seduction, beyond any reconciliation and acknowledgement of the state of things. For them, art has to address the need of sweeping away the idea of a mankind whose actions are completely determined and planned by obscene commercialization, as well as the need of supporting, through an effective multi-lingual aesthetics, the dream of a constructive reawakening, by positioning man behind the usual landscape, beyond mere appearances, so to help him retrieve his own conscience, individuality, and human dimension.